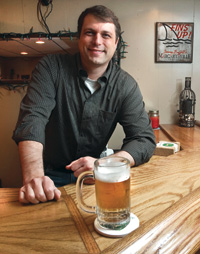 Why Brew: “I’ve always been a beer lover. There’s no doubt about that,” says Epplin, “but my cousin got me into it. If I could do it as easily as he could, I thought it could be an interesting adventure, and by golly, it was.”

Most Popular Pint: A nut brown ale, a mixture of coffee and chocolate. “My wife really likes it, too,” Epplin says.

The Learning Curve: In 1993, the Internet was a dial-up dream (you couldn’t even get it on your phone), so Epplin needed help to get supplies. He tapped his cousin who lived near St. Louis to order from a home brew kit distributor in the area.

DIY Tips: “The whole bottling aspect is a lot of work,” Epplin says, “but five years ago, I got back into brewing because I could keg it. It’s a quicker, easier process. The greatest thing about kegging is controlling the carbonation. It really enhances the beer.”

Why Brew: In college, Pore wanted to drink imported beers. The problem: “In the Midwest, we were just starting to develop craftbrews,” he says, “so the imported beer was so expensive back then, especially for a college kid. It made more sense to make what I wanted.”

First Batch: An amber ale. “It wasn’t very good,” Pore says. “It was too light.”

Yeast Master: With the help of a friend, Pore learned to culture yeast for beer. “When we found yeast we liked,” he says, “we cultured them and kept them in quantities.” Today, the popularity of home brewing, plus the ease of Internet shopping, makes yeasts more readily available.

Pil-sner-grimage: In 2008, Pore flew to Belgium. He visited breweries, toured monasteries (where monks make beers), and drank at pubs. “It completely changed my life as far as brewing goes,” he says. He drank fruity lambic beers made from wild yeast. “I can take these beers anywhere, and everyone goes crazy for them,” Pore says, “from someone who doesn’t like beers to hardcore beer drinkers. They’ve never tasted a flavor like that.” At the pubs, hundreds of beers were available. “The intent (for brewers) isn’t to sell large volumes of beer,” he says. “The intent is to do something special with beer.”

• Watch Jim show us how to brew in this special edition of Evansville Living Presents!

Why Brew: When a client in 1975 shared a drink — and his fascination of home brewing — with Sunderman, he bought a kit and placed it on a card table in his dining room.

First Batch: “A light beer,” made a long time ago, Sunderman says.

Tastes Great: Beer aficionados love to use adjectives specific to brews: acetic (like vinegar), creamy (a soft texture), earthy (like dirt), full-bodied (full of flavor), and more. Sunderman doesn’t have time for that vocabulary, and you don’t need it either to enjoy beers. “People ask me to describe beers all the time,” Sunderman says. “I can’t do that.”

DIY: Sunderman has numerous brews on his resume such as export stouts, old ales, and blondes. He has supplies for interested parties who come from Bloomington, Ind., Nashville, Tenn., and Louisville, Ky., to make brews. A lesson Sunderman tells visitors: “Air is the biggest enemy for beer. You’ve got to keep (the process) clean.”