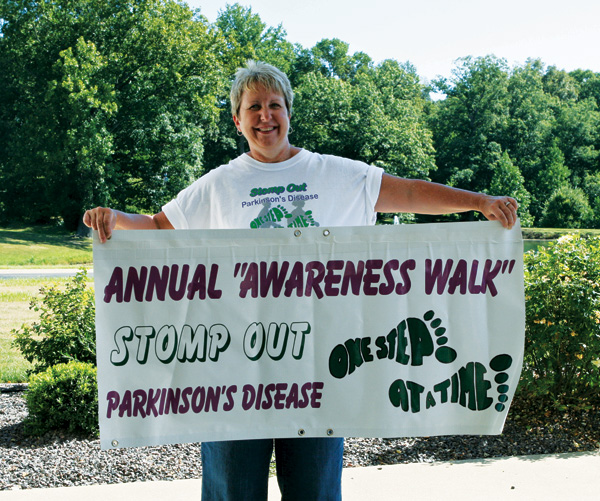 When Karen Smith’s left ring finger started to tremble, she simply ignored it. But after the tremor worsened, Smith was diagnosed nine years ago with Parkinson’s disease at age 42.

The progressive motor system disorder, which affects around a million Americans, eventually forced Smith to leave her career in pharmaceutical quality control. Still, the mother of three tries “to focus on the positive every day,” she says, “not the fact that I’m living with this disease and what the future might hold.”

Since her diagnosis, Smith — a West Side resident with her husband, Steve — has started a support group for patients with young-onset Parkinson’s disease and volunteered as a congressional coordinator for the national Parkinson’s Action Network. In 2006, she launched Evansville’s Stomp Out Parkinson’s Disease Awareness Walk. She’ll rally friends and family for the fifth annual walk Oct. 16 at The Communities of Solarbron. (See our Guide for details.)

I have a family history of Parkinson’s, so I guess I had that in the back of my mind, but I really didn’t think it could happen to me. Other than my grandma, I didn’t think it happened to young people that much. After my diagnosis, I learned that Parkinson’s is not a disease of just the elderly.

I felt like I either could sit back and wait for the worst to happen, or I could become active in the Parkinson’s community and try to make a difference. Because of the family history, I’m very concerned about raising money for a cure. I do not want my children or my grandchildren to have to deal with the disease.

I received a lot of my validation from the workplace; you feel validated when you can be successful at something. In many ways, the walk has replaced work for me, as far as feeling like I’m doing something proactive.

With Parkinson’s, the brain is changing daily, and it affects your ability to accomplish the things you used to do. Just being active and involved keeps you as healthy as you can be. Also, as you lose dopamine, your serotonin level decreases — which, in many people, leads to depression. The more I feel like I’m making a difference, the less I have to struggle with that.