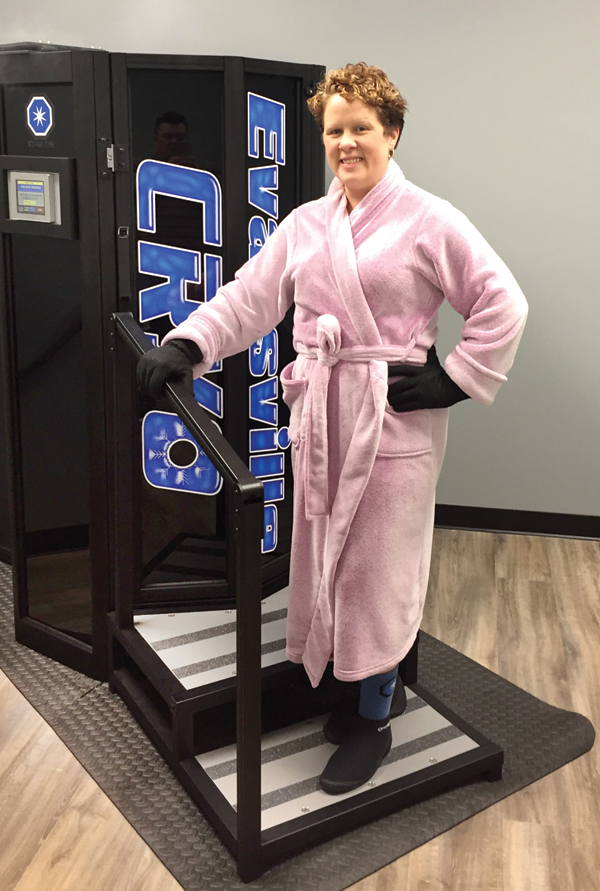 My heart was racing. My knees were weak. I had a difficult time catching my breath. But three minutes later, I exited the chamber at Evansville Cryo feeling refreshed, rejuvenated, and invigorated.

Shanen Franklin, who owns Evansville Cryo at 3000 N. Green River Road with his wife Susan, says the nervousness experienced prior to the first cryotherapy session is actually worse than the session itself.

“I think most people come in with a nervous excitement,” says Shanen. “We are here with you the entire time. We will walk you through it, and it’s only three minutes.”

Cryotherapy was designed in 1978 by a Japanese doctor to treat patients who have arthritis. Using liquid nitrogen to expose the body to temperatures as low as minus 202 degrees Fahrenheit, the cold forces blood to the body’s core to protect internal organs. The flow of fresh, oxygenated blood reduces inflammation and has a multitude of benefits including reduced soreness, reduced pain from joint disorders, increased collagen production, weight loss, better sleep, and increased energy.

“It’s like a 10-cup caffeinated high, or a runner’s high,” says Susan, who is a nurse. “Yet when you go to bed tonight, you’ll be able to sleep well.”

Sessions start at $25 each, with four-, eight-, 12-session, or monthly packages available. Each session lasts only three minutes, yet the positive effects last much longer.

“Everybody gets different results,” says Shanen. “We can never promise anything, but we have some cool success stories.”

As for me? My lower-back pain went away, I had a spurt of energy, and I woke up the next morning feeling refreshed.

For more information about Evansville Cryo, call 812-401-0068 or visit evansvillecryo.com.