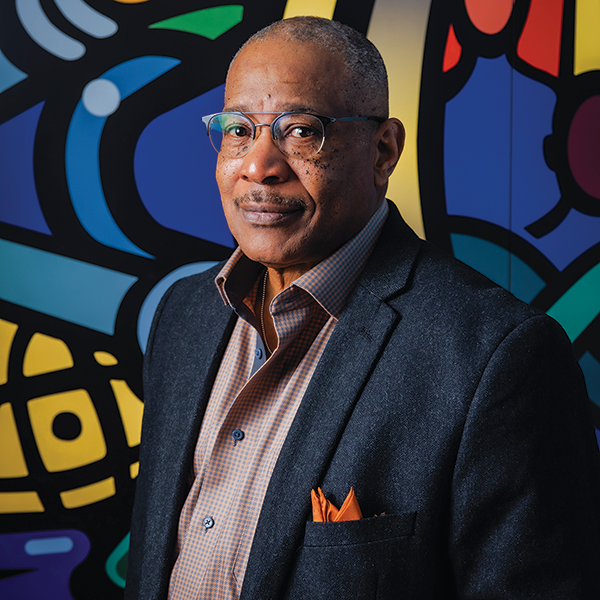 At first glance, Kori Miller may seem like a product of the West Coast. His laid-back demeanor exudes a smooth, suave disposition. He’s a talented musician. He drives an electric car.

Yet deep under his polished smile and charming personality runs Evansville blood, sustaining the legacy of the city’s cultural past, present, and future.

Born and raised in Evansville, Miller’s path to becoming the executive director of the Evansville African American Museum is a winding road with stops in music, enterprise, and nonprofits.

The William Henry Harrison High School graduate has spent most of his life working in nonprofits, first in 1978 as a project coordinator for Offender Aid and Restoration in Evansville, which no longer exists in the city. There, he helped reduce recidivism through finding them employment, a profession he would hold commonly throughout his career.

“It’s an interesting job because a lot of the employers who were good with working with us were people who kind of bought me instead,” says Miller. “They were like, ‘I’ll give you a chance to see how your program participants will work.’”

Miller, a musician throughout his youth, also was a drummer in R&B and pop band Flight Line. Greg Moore, the older brother of former Moore Music owner Pat Moore and a longtime guitarist and music producer in Los Angeles, was looking for a band to record some of his original music when he stumbled upon Flight Line. After recording a few songs in Nashville, Tennessee, Moore shopped the band’s music in L.A., eventually landing them a record deal and moving them out to the West Coast in 1981.

Miller moved out to L.A. that May and lived in the city for the next 36 years. Miller’s band recorded music with one of the industry’s most acclaimed producers, Robert “Bumps” Blackwell, and worked with top musicians such as Little Richard and Bessie Smith.

“The (recording) studio was right on Washington Boulevard and the boardwalk in Venice, California,” he says. “The studio was overlooking the ocean, and we were putting some time in just sweetening the songs up.”

After a few years, the music recording died down, though Miller still performed weekly at Rapisardi Restaurant. But he wasn’t done in Los Angeles.

In 1989, he returned to nonprofit work as an employment counselor focused on job training at the West Area Opportunity Center, before being hired by The Training Institute and working his way up to Vice President of West Coast operations. Miller would work at various job development and housing nonprofits throughout the next three decades, including Goodwill Southern California and the Los Angeles Homeless Services Authority.

During his time in Los Angeles, Miller returned to Evansville for holidays and reunions with parents. His mother, Mattie, who passed away on April 2, was a longtime Evansville Vanderburgh School Corporation educator and retired principal at Harper Elementary School as well as the school system’s first Black teacher at a segregated school. His late father, William, also was a teacher and retired principal at McGary Middle School. Both were heavily involved in the African American Museum, with William serving as construction chairman, vice president of the board of directors, and curator of the museum.

A preserved, furnished section of one of the original apartments of Lincoln Gardens in the museum is named for William.

“He found a lot of artifacts to create how the apartments used to look,” says Miller. “He was a good researcher. He could put stuff back together. He went over to Lincoln (High School) after it became an elementary school and found a trophy from one of the national championships when it was an all-black school that was just thrown in the trash."

"My mother and my father had a lot to do with this museum;’ he adds. "My dad spent a lot of time here, and for me to wind up here, I mean, my DNA is all over the place:’

William died in 2012, and in 2017, Miller moved back to Evans­ville to help care for Mattie. Two years later, he was named to the museum’s board of directors before becoming the interim executive di­rector in 2021 and, a few months later, the full-time executive director.

"I was on the HR committee for the board when we were trying to replace (former director Ashley Jordan);’ he says. ”After not having a successful job search, one of the members said, ‘You have experience in nonprofit management. We think you need to take it on:"

The position is a perfect fit for Miller, whose father actually wrote the job description for the first ex­ecutive director.

"I would come home every year for Thanksgiving, and I just happened to be downstairs and saw the job de­scription;’ he says. "He was excited about being able to hire someone."

Since being hired as the mu­seum’s executive director, Miller and his team have added several new exhibits such as a tribute to the Negro League baseball teams displayed inside Eastland Mall and rotating art exhibits.

Miller says he is also working with Department of Metropolitan Development Executive Director Kelley Coures on receiving a desig­nation for Baptisttown, the neigh­borhood surrounding the museum, to join the National Register of His­toric Places.

"There’s invaluable history here about Evansville, and I’m glad to say there’s still room for improvement. We’re doing some great things that are going to take it to the next level, so we can leave it for the next gen­eration;’ he says. "That’s really my succession plan."