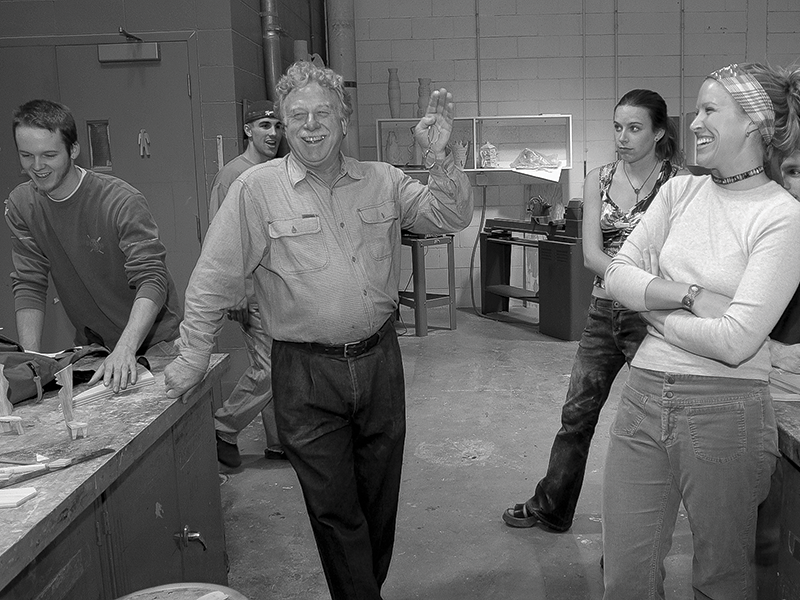 It’s difficult to walk the University of Southern Indiana campus and not find the influence of artist and Professor Emeritus of Art John W. McNaughton.

His presence is evident in the works of art easily recognized across campus, but he also lives on in the Art and Design Department, in his students, and in the minds of many university employees.

“John was such a treasure to this university and very invested and committed to his students,” says Susan Sauls, director of University Art Collections.

McNaughton died March 11 at the age of 78. As a founding member of USI’s faculty and a large presence in the Art and Design Department, he is remembered for his contributions to the growth of the university.

Born in 1943 in Winchester, Indiana, McNaughton earned degrees from Ball State University in Muncie, Indiana, and Bowling Green State University in Bowling Green, Ohio. For 35 years, McNaughton and his colleagues at USI balanced teaching with developing and expanding the offerings of the Art and Design Department. This early work was essential to creating the state-of-the-art program USI students participate in today.

Teaching was always important to McNaughton. Friends and former colleagues are quick to recall his passion and care for students. Professor Emeritus of Art Lenny Dowhie recalls the two professors helping each other evaluate and critique students’ works. Michael Aakhus, professor emeritus of art, remembers McNaughton often collaborating on projects with students; when he was commissioned for a project, he often brought his USI students into the fold.

“We were a small team, but we loved each other, and what we saw [at USI] was a future,” says Dowhie.

“He taught them not just in the classroom, but he taught them how to actually be successful out in the art world,” adds Aakhus. “And the method worked — many of McNaughton’s students have become successful in their art careers.”

2000 USI art graduate Megan Russell agrees. The Evansville native studied under McNaughton and worked alongside him.

“John’s energy and enthusiasm were contagious. You couldn’t have a bad day around him,” she says. “He always believed in what you were doing, encouraged you to do those things and push the limits on what you dreamed up.”

Woodworking was a passion Russell shared with McNaughton. When another professor mentioned an international art contest, McNaughton encouraged Russell to apply and helped her craft a woodwork sculpture of a melting tennis racket. “Hot Competitions” was one of three works chosen to represent the U.S. at the 2000 Summer Olympics in Sydney, Australia; since the games, the sculpture has been on display at the Olympic Museum in Lausanne, Switzerland.

“He didn’t make you feel little or small. You knew he was an awesome artist and teacher, but he would pull up his sleeves and do projects with you,” she says.

Beyond his legacy in the department and active mentoring and teaching of students, McNaughton was, at his core, a true artist. Today, the university displays 18 of his works such as the wooden sculpture “Vision” in the Robert D. Orr Center and the whimsical “Upside Down House” at Burdette Park, as a testament to his diverse artistic abilities.

“John was an incredible artist,” says Katie Waters, professor emerita of art. “His technically amazing, colorful, whimsical sculptures also often subtly convey deeper messages. They grace many important museum and university collections as well as the homes of his many collectors in Evansville and far beyond.”

McNaughton’s versatility in art and design made him a truly unique artist to Aakhus; from painting and drawing to sculpting, McNaughton was capable of it all.

“He was quite remarkable and an amazing man,” he says.

According to deJong, McNaughton’s mind continued spinning with creative project ideas, even in his final days.

“I last met with John a week (before his passing), and we discussed a new art project; he was always planning new projects,” says deJong. “He was an amazing artist and a motivating example to continue to make art.”

When they think of McNaughton, his former colleagues talk of his bright, ever-present smile. They say he had an enjoyable sense of humor and an open heart, was generous, and possessed a creativity that inspired his colleagues to work hard for the students and the university. He instilled in his colleagues a drive to share their art with a larger audience.

“The saddest thing to me is that there will be no more ‘John McNaughtons’ — no more wonderfully creative manifestations of his imaginative, optimistic, joyful view of the world,” says Waters. “I feel exceedingly lucky to have known him as a colleague and a fellow artist.”

McNaughton is survived by his wife Kathie, daughters Carol McNaughton and Jill Nolan, their spouses Tonya Lamer and Pat Nolan, and grandchildren Kylie and Erin Nolan.