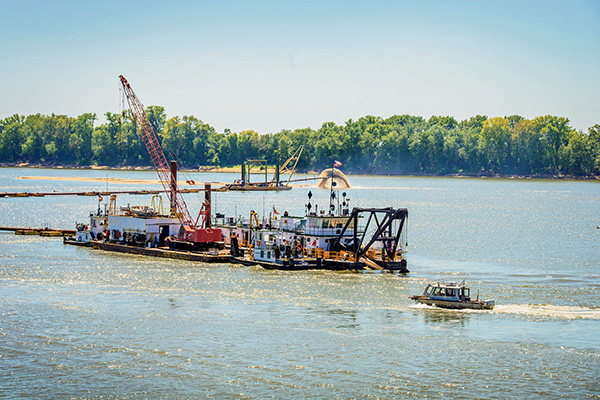 There is a new hot spot for boaters enjoying a ride on the Ohio River — a group of islands recently formed at Ohio River Mile 792 facing the Downtown Evansville riverfront. The islands were formed by the U.S. Army Corps of Engineers (USACE) Louisville District between Aug. 25 and Sept. 1 through dredging.

USACE is required to maintain a channel that is 300 feet wide and 9 feet deep for the towing industry and used a hydraulic dredge that removes material from the bottom of the river and transports it to the disposal area, creating a series of small islands. For this project, the channel was deepened to 12 feet to provide a buffer before dredging needs to happen again.

“Due to high water this past winter and spring, shoaling occurred in the navigation channel which required the dredge to remove the sediment from the channel,” says James Scherzinger, navigation and dredging team leader for the Louisville District. “The disposal area (island) will usually be washed away after a couple of high-water events. We typically dredge this area every two to three years, and this depends on how many high-water events we have.”

While the dredging in the river was completed to maintain a safe navigation channel for towing, it also provided the added benefit of creating a great place to enjoy views of the Evansville riverfront.

“This U.S. Army Corps of Engineers Louisville District dredge project accomplished two things: we are maintaining the navigation channel and providing a beneficial use of dredged material for public use,” says Scherzinger.