In her 15 years as president and chief executive officer of Deaconess Health System, Linda E. White never accomplished anything — at least on paper. Instead of taking credit for the success of a growing health system, White always issued press releases and internal memorandums from the perspective of the organization.

“That right there tells you how she operates,” says Deaconess Health System communication specialist Ashley Johnson. “Officially on paper, Linda herself has never done anything. She’s always a part of a greater ‘we.’”

That all changed Oct. 25, 2016, when White informed Deaconess employees, associates, and friends she would be retiring.

“At the annual Board of Directors meeting held yesterday, I submitted and the Board approved a plan for my retirement,” wrote White in an internal memo. “Following a 40-year history with the organization, I will step down from the role of President and CEO of Deaconess Health System effective June 30, 2017. I will, however, continue to be part of Deaconess for one year following retirement as CEO emerita.”

Shawn McCoy will assume the role of CEO while Dr. James Porter will become president on July 1, 2017.

Although she continues to lead with effectiveness and compassion, White’s retirement comes as no surprise for those who have witnessed her selflessness through the years.

“Linda has built a great team. She knew McCoy and Porter were ready to move up, and Linda selflessly made the decision to retire,” says Old National Bank Chairman and CEO Bob Jones, who has worked with White through her membership on the bank’s board. “It’s a huge loss, but the most important thing you do as a CEO is find your successor and make them ready, and they’re both ready.”

White’s upbringing greatly influenced who she is today. She is the eldest of three children born to John and Elizabeth White of Terre Haute, Indiana. Her father was a graduate of Rose-Hulman Institute of Technology who served in World War II. Upon his return from the war and a month before Linda was born, John’s father suddenly passed away; he took over the family’s engineering and design company as well as took care of his widowed mother. 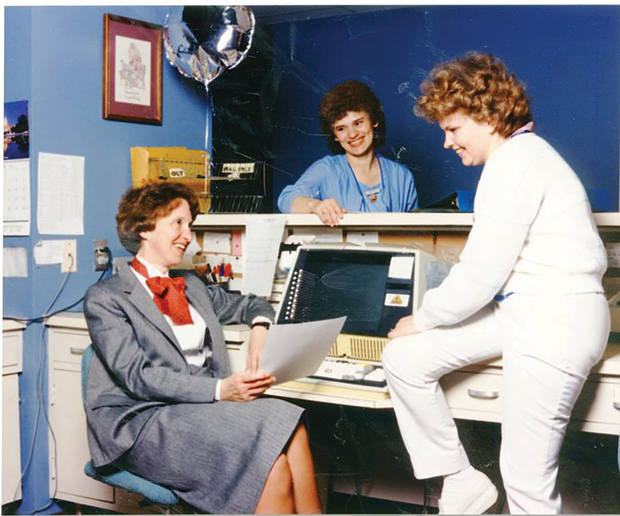 ▲ White and two colleagues gather around a nurses’ station featuring one of Deaconess Hospital’s earliest computers.

“There was a lot of responsibility on this young man all at once,” says White. “We remember my dad as always being at work. He loved work. He never complained; he worked seven days a week. He made sure the customers were his primary focus.”

White recalls many summers spent filing papers and performing other tasks at the family business. She spent much time with her father, watching how he put the customers’ needs first, and even considered following in his engineer footsteps, but “in that time, it just didn’t fit,” she says. 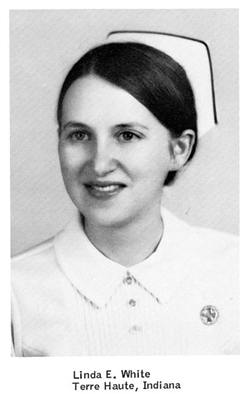 Instead, White obtained an applied math degree in 1970 from Indiana State University in Terre Haute and became a computer programmer. After doing computer work for a clinic, she became interested in nursing. She was prepared to attend St. Luke’s College of Health Sciences in Kansas City, Missouri, when her mother suggested visiting the Deaconess School of Nursing.

“We drove down and I think it was two weeks before school was to start here,” she says. “It was a Mr. Pence who said, ‘With your credentials, we will let you in.’ Otherwise I would have been in Kansas City. And the rest is history.”

After White graduated, she was hired at Deaconess Hospital as a nurse analyst — what she describes as an industrial engineer on a nursing track. It was pretty much unheard of at the time, she says.

“Deaconess took a chance, and I’m forever grateful,” says White, who eventually obtained her bachelor’s and master’s degrees from the University of Evansville. “I just held a variety of roles after that. I will admit I never applied for any of the jobs. 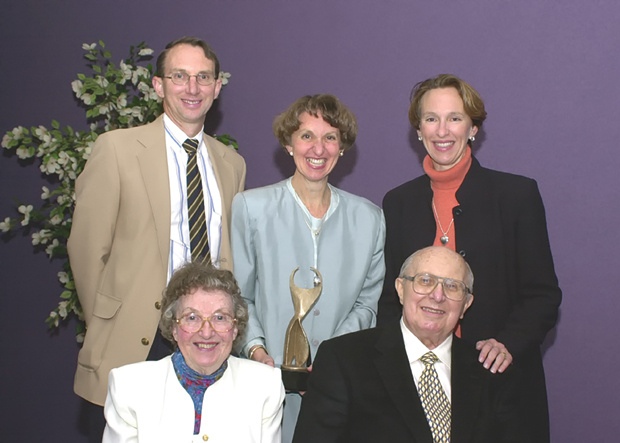 ▲ White is pictured with her brother, sister, and parents after she was awarded the 2001 ATHENA Award.

“I tried to combine those analytical skills from the math with the clinical skills and some management,” she says. “And yes, it’s an unusual track. But as people look back, I hope they can say, ‘She made a difference.’”

Anyone who knows White would tell you she has indeed made a difference — in individual lives, the health system, and the community.

University of Evansville assistant nursing professor Joan Fedor-Bassemier worked with White as the two were moving up the ranks at Deaconess Hospital. Fedor-Bassemier recalls White’s knack for remembering things — chief among them important dates and names of everyone she would meet.

“She would know dietary staff, security staff, the housekeeping staff, people’s kids, their dogs,” says Fedor-Basssemier. “Decades would pass, and she still would remember.”

Although White’s long days are packed with meetings, phone calls, and interviews, she goes out of her way to interact with people at all levels in the hospital system.

“She never takes the elevator,” says Johnson. “She always takes the stairs so she can interact with as many people as she can on the way to her next meeting.”

That includes patients who are friends or family members of White’s acquaintances and colleagues too. Jones says he always can count on White to visit anyone with a connection to an Old National Bank employee.

“There’s no fanfare. She just shows up,” says Jones. “She’ll make sure everything is okay. But she’s kind of like the stealth bomber — you turn around and all of a sudden she’s gone. In our situation, when Linda left, all the nurses said, ‘Oh you know Linda White?’ And I said, ‘Doesn’t everybody?’”

White is famous for her ability to go crazy for a cause. From dressing up in a pink wig for breast cancer awareness to donning a costume to get others excited at a staff meeting, White does whatever it takes to raise awareness for Deaconess and the community.

Jones recalls White as a backup dancer for a rendition of the Creedence Clearwater Revival song “Rolling on the River” at the annual Really Big Show fundraiser for Arc of Evansville.

“She was as off rhythm as any human being I’ve ever seen, but it didn’t matter,” says Jones. “Her right arm would be going up, everyone else’s left arm would be going up. She laughed at herself and she was doing it for the cause. It was just Linda at her best. She’s all about giving to others and helping others.” 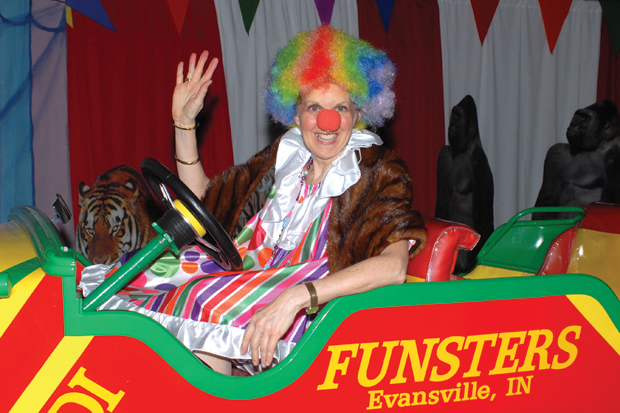 ▲ White dresses as a clown at a circus-themed Deaconess Party of the Year.

White also dons over-the-top costumes at the annual Deaconess Party of the Year.

White’s ability to promote a cause at the expense of her own image is what makes her a great leader, says Jones.

“She knows in order to lead, she has to break the wall down between being an executive and just being one of the people,” says Jones. “Linda is a consummate ‘one of the people.’ It’s who she is. She has zero ego, and I think this is her way of making herself more relatable, but it’s real. It’s not put on. It’s just who she is.”

As former chairman of the Deaconess Health System board, Koch Enterprises vice chairman Jim Muehlbauer was part of the board that selected White as president and CEO. He says he always has been impressed by White’s management style, which is more focused on people than the bottom line, in the boardroom and beyond.

“Linda would stop us and say, ‘How will this affect the patients?’ She always brings it back to ground zero. She was a nurse and she knows what it takes to provide great patient care. She also knows what it takes to get people to want to work for you and go above and beyond,” says Muehlbauer, who now serves on Deaconess’s quality committee. “Linda is a leader who gets people to want to follow her. She succeeded and does that so well at Deaconess because she knows the business. “ 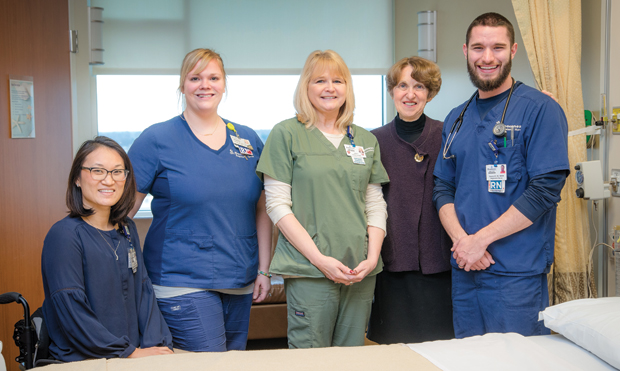 Fedor-Bassemier says White remained approachable and grounded no matter the situation or title in front of her name. Through constant change in health care — dress codes, computer systems, methods of care, and leadership, among others — White remained steady.

“We went through a lot together. You always had to deal with change, and change was not easy,” says Fedor-Bassemier. “Lots of people have come to Deaconess, and lots of people have left, but Linda has been there the entire span. The continuity helped make her the face of Deaconess to the community. There’s a person behind that title. And she’s always been approachable.”

Muehlbauer says it is White’s friendly demeanor that makes her a legend outside the hospital world as well.

Although White soon will step down as CEO and president, Jones says her legacy will live on.

“Her spirit is going to be there. The CEO’s role really is to create a culture and then hope whoever takes over, that culture sustains,” says Jones. “The culture Linda has created is going to last a long, long time. It’s got great legacy-staying power.”