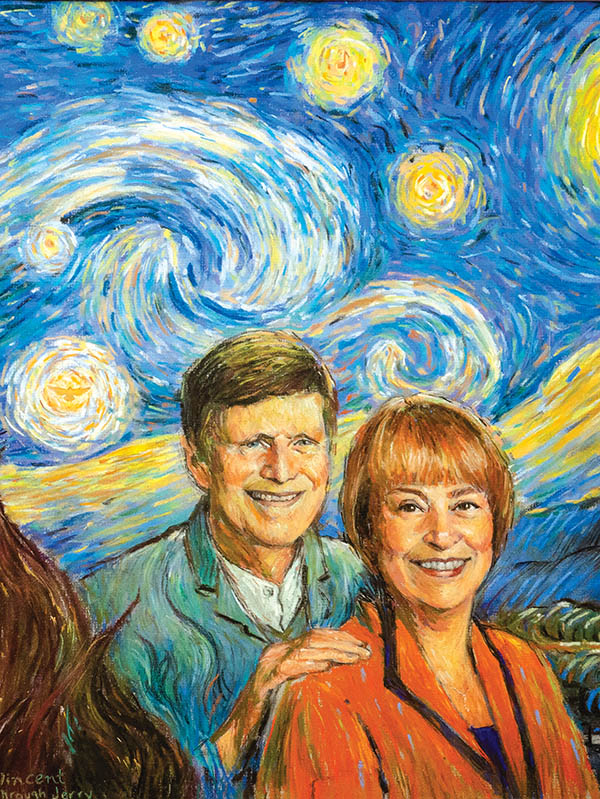 Almost 50 years ago, Dr. Dennis Davenport read his first book about the Dutch painter Vincent Van Gogh. Given to Davenport by a friend, the book immediately enticed him with the story of one of the most famous and influential painters in history. Now, Davenport lays claim to a collection of more than 60 replicas, books, mugs, and trinkets of the post-impressionist artist.

Wearing Van Gogh socks and a “Starry Night” watchband and tie, the enthusiasm for Van Gogh is clear from the Eastminster Presbyterian Church minister. Davenport says that gift from a friend — “Vincent’s Letter to Theo” — which sparked his love for the painter, contained letters between the brothers.

“I just fell in love with the book; I devoured it,” says Davenport. “He could write two or three paragraphs naming all sorts of colors. He very clearly described things so you could see exactly what he was looking at.”

Davenport and his friend who gave him the book, Jerry Lemenu of Detroit, Michigan, still keep in touch via letters like the brothers. He says they sign their correspondence in the same way the Van Goghs used to sign them — "a handshake in my thoughts.”

The interest in Van Gogh started with the letters, and evolved into his paintings. Davenport owns several replicas and prints of his works, and even has a version of the “Starry Night” with a portrait of him and his wife Emma Sue embedded in it painted by Lemenu.

The fascination turned into a reality in 2004 when Davenport received a $30,000 grant from the Lilly Endowment Clergy Renewal Program (the congregation and the pastor came together to write a proposal to win the grant), which gave him the opportunity to travel throughout Europe and follow the footsteps of Van Gogh. He saw the different places Van Gogh lived, worked, and drew inspiration from. His collection includes Van Gogh’s artwork coupled with his own photographs taken of the actual scenery that inspired the artist.

This trip to Europe also led to the start of the Christianity and the Arts program at his church. Its purpose is to draw in and enlighten people on how the arts can inspire faith and express human experiences.

“We try to highlight the important connection between Christianity and the world of the arts and how they intersect in so many ways,” says Davenport. “Whether it’s film, drama, dance, or visual art, you can find a connection.”