Abraham Lincoln may only have lived in Indiana for 14 years of his adolescence, but the former U.S. president’s impact on the state has been remembered and honored for more than two centuries.

At the Lincoln Pioneer Village and Museum in Rockport, Indiana, the goal is to educate school groups and the community on what life was like when Lincoln lived in Spencer County. The Works Project Administration built the village, with 13 replica cabins, in 1935, and the museum followed in the 1950s.

“We have a great facility here that has a wonderful museum and really nice artifacts that people are pretty in awe of when they see what we have,” says Lincoln Pioneer Village and Museum director Nancy Kaiser.

The site boasts many historic artifacts, including a hutch built by Lincoln for his family’s neighbors Elizabeth and Josiah Crawford and a Breeches Bible from 1598, which is the oldest artifact on site. Another rare piece on the property is a Rocker Beater Loom — only 66 of which are known to exist — still in working condition donated by Evansville weaver Ruth Siems, who also is the inventor of Stove Top stuffing.

While school groups schedule field trips and activities throughout the academic year, the Lincoln Pioneer Village and Museum also offers Heritage Days twice each year in May and again later this year on Oct. 27 and 28 to provide family fun and history education.

“We have interpreters, demonstrations, and activities for the kids. They can make candles, and we have a few games they play,” says Kaiser. “It just really makes it come to life during the Heritage Days. It gives the feel to the kids of what it would have been like back then.” 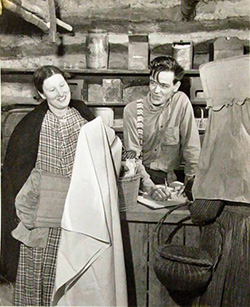 On Set
The 1955 Burt Lancaster movie “The Kentuckian” was partially filmed on the Lincoln Pioneer Village and Museum grounds. Several Spencer County residents also were cast as extras and doubles in the film.

Acting Out
Rockport native George Grose was cast as a double in the film when he was 12 years old and says his family was able to install plumbing in their house using royalties from the movie.

Barn Again
The transportation building still on site today was built by the crew to serve as a tobacco barn in the movie.