It’s a city with many nicknames. “The Big Easy,” “Crescent City,” and “The City That Care Forgot.”

New Orleans is complicated — a city of contrasts. Its reputation as a place to party is well earned. However, there is a lot more to NOLA than the Mardi Gras, so locals deny it is a festival of beads, boobs, and booze.

Founded by the French, ruled for a time by the Spanish, and part of the 1803 Louisiana Purchase, New Orleans is a cultural stew of the traditional, the mystical, and the modern.

Each Sunday morning in the St. Louis Cathedral, located in the French Quarter’s Jackson Square, there is Sunday mass. As the doors to the cathedral open, the smoky smell of incense seeps outside where more than a dozen fortune tellers, psychics, seers, and street performers line the area outside the church, offering a more exotic type of belief.

One street performer, calling herself La Katina de la Plaza, wears a yellow, flowing lace dress, a crown of roses, and sports a parasol. Her face is studded with several jewels; glittering eye shadow and what appear to be stitches are painted across her mouth and cheeks. She doesn’t want to explain her name or her character. She only will pose for “tips.” 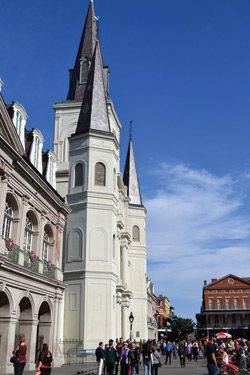 The French Quarter is a 78-square block area. As the oldest neighborhood in the city, it is 13 blocks long and six blocks deep. The narrow bricked and cobblestone streets are lined with iron lamps, beautifully preserved examples of Spanish architecture that include courtyard gardens and ornate iron railings lining two- and three-story balconies.

The Quarter is anchored by Jackson Square, named for President Andrew Jackson who, along with a coalition of pirates, free blacks, and Tennessee Volunteers, routed the British in the last battle of the War of 1812. Along the outside perimeter of the square, local artists display their wares. Across from Jackson Square is Café du Monde, famous for its café au lait and beignets, which are square pieces of dough that are fried, covered with powdered sugar, and sold in threes. The Jackson Square location is open 24 hours, seven days a week, closing only Christmas Eve and Dec. 26.

The French Quarter often is associated with Bourbon Street, a tacky, over-sold area crowded with bars, hawking what tastes like alcohol-infused slushies. But one block over is Royal Street, lined with art galleries, high-end clothing, and restaurants that are a foodie’s dream.

Just outside the French Quarter, in the Central Business District, is Café Adelaide and The Swizzle Stick Bar, a Brennan family tribute to an eccentric aunt whose three oversized portraits take up one wall of the restaurant. Adelaide’s menu includes shrimp and okra gumbo, tasso-brined double cut pork chop, and for dessert, a white chocolate biscuit pudding with root beer syrup. 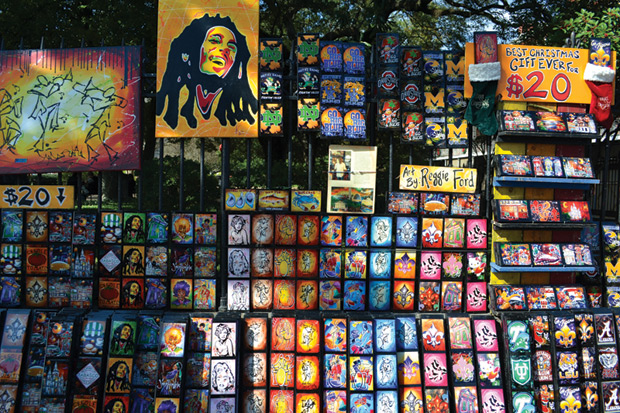 ▲ Artists hang their wares along the wrought iron fence that surrounds the square.

While the food in New Orleans is a big draw, the No. 1 place visited is the National WWII Museum, located in the Warehouse/Arts District. According to a press release, the museum had more than 483,000 visitors in fiscal 2014.

The museum, founded by historian and author Stephen Ambrose, sits on six acres and is composed of five pavilions. One of the highlights of this excellent facility is the 4D movie, “Beyond All Boundaries.” Produced and narrated by actor Tom Hanks, the movie parallels WWII events in both Europe and Asia, giving the viewer a comprehensive idea of how America was fighting a two-front war. With lots of advanced special effects and archival footage, this is a must-see, ideally before touring the rest of the museum.
Another highlight of the museum is the Boeing Center in the U.S. Freedom Pavilion, which houses air and motor crafts used during the war. For the best view, climb to the fourth floor viewing bridge to see the aircraft illuminated by a 96-foot glass wall.

The aircraft are suspended at different heights, including a Dauntless dive bomber which has a unique split wing/dive brake that allowed for dive attacks at up to a 70-degree angle. The Dauntless became a symbol of American resurgence after the Pearl Harbor attack. Also on display is an F4U-4 Corsair, which is considered to be one of the most effective fighter aircrafts. The Corsair has an inverted “gull wing,” designed to help the propellers clear the ground. Visitors also can view a P-51 Mustang which one WWII pilot described as “an answer to the bomber boys prayers … The mustang is the miracle plane that turned the tide of the air war.”

After the Boeing Center, visit the immersive gallery, “The Road to Berlin,” which illustrates American battles in Europe. Beginning with the Japanese attack on Pearl Harbor pulling the U.S. into the war, “The Road to Berlin” includes a well-executed explanation and demonstration of the initial setbacks suffered by the U.S. in North Africa. Audio of bombs exploding and pilots trying to communicate, give visitors an idea of the confusion and chaos of war.

A similar gallery, “Road to Tokyo,” which opened in 2015, retraces the battles of the Pacific theater from Pearl Harbor to Tokyo Bay, by way of New Guinea and Southeast Asia, the Himalayas, Burma, the islands of the Pacific, China, India, and Alaska. 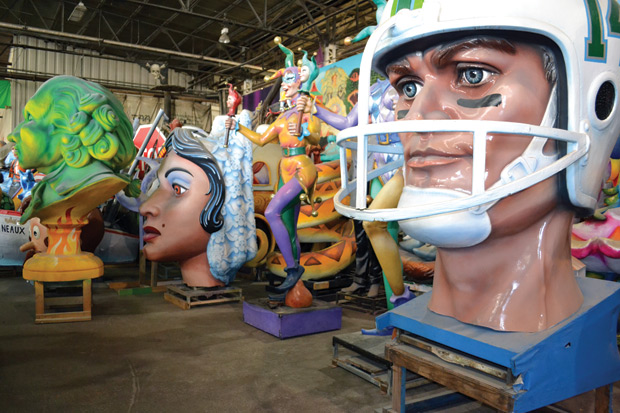 ▲ Mardi Gras World is a working warehouse where thousands of float props are created and stored. A tour guide leads guests on a 45-minute tour of how the floats are designed and constructed for the parade.

For a taste of Mardi Gras without the crowds, take the 45-minute tour of Mardi Gras World, located near the convention center. A working warehouse, a tour guide describes how the floats are designed and constructed for Mardi Gras, as well as other major parades.

The figures on the floats are called “props” and start as a base of Styrofoam, which are then covered with papier mache. According to the guide, in 2015 there were 54 different Mardi Gras parades, starting 11 days before “Fat Tuesday.” Mardi Gras ends at midnight on that Tuesday, with the start of Ash Wednesday.

New Orleans is a city with a fascinating history. The place has a vibe of being in almost constant celebration. Chris Rose, a columnist for the Times-Picayune, described New Orleans’ residents as the following: “We dance even if there’s not a radio. We drink at funerals. We talk too much and laugh too loud and live too large and frankly, we’re suspicious of those who don’t.” Or in the words of the French — Laissez les bons temps rouler! (Let the good times roll!)

The New Orleans airport is about 30-miles west of the central part of the city. The fare for a taxi to downtown is a flat $36 for one to two people. The airport shuttle is less expensive, has frequent service between the airport and downtown, but can be time consuming particularly if your hotel is the last stop.

1. The airport needs a serious upgrade. Be aware that bathrooms are not numerous and can be tricky to locate.

2. New Orleans, like all major cities, has a homeless population. Some homeless people are verbally, but not physically aggressive in asking for handouts.

3. It is best to walk in groups of at least two after dark.

4. New Orleans allows open containers of alcohol. Don’t be surprised to see people walking along the street in the morning having a beer. Some bars are open 24-hours a day.

5. Pedicabs, human powered bicycles with seating for two, are a great way to see the French Quarter, which has narrow, winding streets. Mule-powered carriage rides also are available.