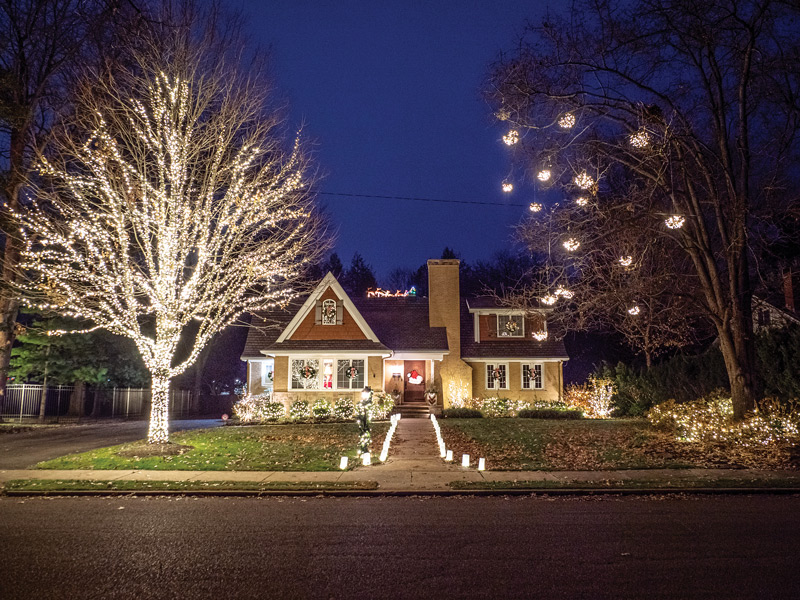 Each December, if you find yourself turning south onto Lombard Avenue from Bellemeade Avenue on Evansville’s East Side, you undoubtedly are greeted by a cluster of lights on a distant lawn. What awaits in the 700 block of Lombard is a gorgeous spectacle of bright, white lights wrapped around seemingly every inch of a young red maple tree.

The homeowners have been stringing up lights in their front yard since 2014. Lighting the way is Wilde Horticulture owner Brian Wildeman, whom the homeowners met when their children attended the same school. A proponent of using lights in innovative ways, Wildeman has partnered with the Lombard family to produce a custom light display each holiday season that is elegant, impactful, and displays their personality.

A team from Wilde Horticulture begins setting up the display in November, Wildeman says, before the weather turns bitter cold. The lights take a small, multi-person crew about two days to install, using a lift to access the growing tree’s top limbs.

The result has been a display so enchanting that the homeowners keep adding to it. “The first year, the lights were strung on the tree and bushes. Later, we added wreaths to the windows. A few years later, we hung the snowflake balls in our other front tree,”
the homeowners say.

While neither the homeowners nor Wildeman know the exact count of lights used — that number has long been pushed to the back of their minds — they estimate about 10,000 bulbs illuminate the current display. As the tree has grown, more lights have been tacked on to cover the additional growth, necessitating the implementation of multiple fuses to handle the strain.

Passersby stop to admire the display or take photos. It’s one of the many houses on an unofficial local Christmas lights tour.

“We’ve done it so long that not having it would feel like something was missing,” the homeowners say. “It would be like not having a Christmas tree in the house.”