In northeast Evansville, more than 70,000 residents occupy what 19th century writers referred to as Evansville’s City of the Dead.

The current park-like setting of Oak Hill Cemetery had its beginnings in 1850, when the City Council formed a committee to select a site for new burial grounds. The old cemetery, at Fifth and Mulberry streets, was running out of room and had become landlocked by new subdivisions. In May 1851, the city received a proposal from Horace Plummer to sell some property about a mile and a half outside of town. The property, known as Lost Hill, was the only tree-covered hill in an otherwise flat area.

In July, the council authorized the mayor to contract with Robert Barnes for 40 acres and Plummer & Colvin for the adjoining 15.75-acre hill for $1,200 and $750, respectively. City engineer P.H. Woodard surveyed the area and deeds were soon drawn up to transfer the property to the city. In May 1852, after a formal plan for the cemetery was presented, Councilman Stahlhoefer was ordered to begin cleaning up the property. During the remainder of the year, crews cleared brush, removed trees, installed drainage ditches, laid out the roads, and enclosed the cemetery with a rail fence with two gates.

In February 1853, it was announced lots for the Lost Hill Cemetery would be sold at the courthouse. By the time the postponed sale had been held on Feb. 22, the formal name had been changed to Oak Hill. On Feb. 18, 1853, two-year-old Ellen Johnson became the first burial in the new cemetery.

John Goodge, who served as sexton for 44 years, largely was responsible for the shaping of the cemetery grounds. The Civil War caused a military section to be laid out for the internment of 572 Union and Confederate soldiers who died in Evansville.

Many of the changes to the cemetery we recognize today occurred soon after. The current administration building (1899), front gate (1901), and brick wall (1917), along with other additions, are now over a century old. Today, the cemetery still performs interments on the grounds.

Although laid out as a cemetery, many see Oak Hill’s grounds as a park and arboretum. In April, the ArbNet Arboretum Accreditation Program and the Morton Arboretum awarded the cemetery’s William Halbrooks Arboretum a Level II accreditation. 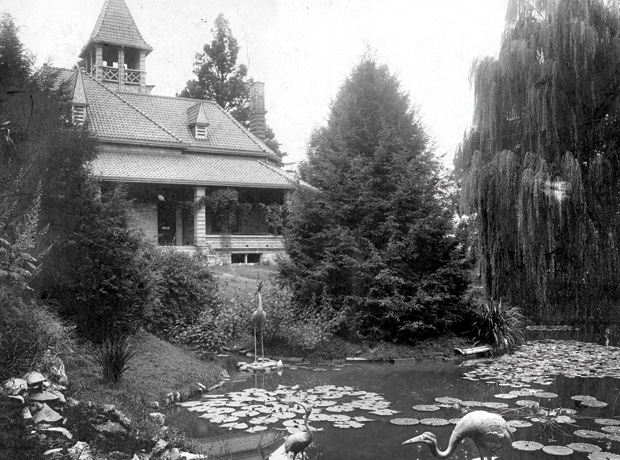 ▲ Opened in 1853, the Oak Hill Cemetery on the northeast side of Evansville has often been described as park-like due to its landscaping and the William Halbrooks Arboretum. The administration building, above, was erected in 1899 and the front gate, left, was constructed in 1901.
Share
Facebook
Twitter
Previous article
Holly Jolly Holiday
Next article
Something Extra