This story is edited from a series of posts in the Evansville Living editor’s blog, “300 Words.” Sources for research include the archives of former Evansville Preservation Officer from 1978 to 1996 Joan Marchand that are located at Willard Library, as well as the records of current preservation officer Dennis Au. Michael Schopmeyer, a Lombard Avenue resident and local attorney, also provided research materials. Nick Hebebrand assisted in research.

A shady street on the East Side of Evansville shares a name with one of the most famous streets in the world: San Francisco’s Lombard Street, famous for having a steep, one-block section consisting of eight tight hairpin turns. Our Lombard is an avenue, the principal street in a moderately successful real estate development called Bellemeade that was promoted as “a home site for the person tired of the city,” begun 100 years ago.

In April 1913, Evansville veterinarian John R. Mitchell bought 40-plus acres approximately two miles from the city boundary of Kentucky Avenue. The south end of the tract was bounded by Washington Avenue and the north end was bounded by Lincoln Avenue. The tract was just south of Woodmere, the state hospital. Mitchell platted the land into 89 lots and named the north-south street Lombard Avenue.

Mitchell bought what was known as the McCallister-Terry farmhouse at 3515 Lincoln Ave. to live in while he was developing Bellemeade. This home was constructed in 1830 and, over the years, it has been enlarged and embellished.

The 89 lots, which cost $300 or $500, were advertised as “large enough to give breathing space and have your own flowers, fruits, and vegetables.”

“Buy lots in Bellemeade. It’s a pleasure to show them,” proclaimed the advertisement Mitchell placed in an ad in The Evansville Courier in 1920. That was the message of Evansville veterinarian-turned-real-estate developer Mitchell as he marketed the street. For the next 40 years, Mitchell’s subdivision slowly grew; progress was impeded by war and the Depression.

He named his subdivision Bellemeade — beautiful meadow — and promoted the convenience of the nearby Bell Street streetcar extension, which terminated at the State Hospital, as well as the large size of the building lots. Lots on the east side of the street were 50 feet across and 395 feet deep.

A story published in the Evansville Courier & Press on May 3, 1994, by Anne Schleper about Historic Preservation Week activities ran with this headline: “A Daring Neighborhood: An Early 20th-Century Developer took a Chance with a Subdivision Called Bellemeade.” A Lombard Avenue tour was to be led by the city’s historic preservation officer, Joan Marchand.

“The Lombard Avenue development was daring at the time because it was so far from the city limits,” said Marchand in the newspaper story.

‘”It was an unusual suburban residential development because it was out in the ‘boonies.’ It didn’t develop fast because of that, and also because World War I intervened,” she said.

The developer Mitchell named the north-south street within the subdivision Lombard Avenue because he liked the sound of the name, Mrs. Marchand said. 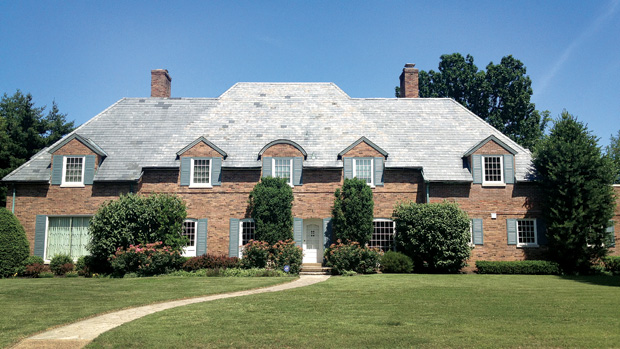 The best-known house on Lombard, 600, gets its acclaim from the famous oilman who lived there, Ray Ryan, allegedly murdered by the mob in October 1977. After working out at the 21st Century Health Club on Bellemeade Avenue, Ryan was killed when his Lincoln Mark V blew up when he started the ignition. The home, as it appeared when the Ryans purchased it in 1946, is pictured in the 2012 book, “Mob Murder of America’s Greatest Gambler,” by Herb Marynell and Steve Bagby.

The French Provincial home was built in 1938 for E.F. Schnacke who was the president of the North Star Furniture Co. It has been expanded through the years but retains the original character. 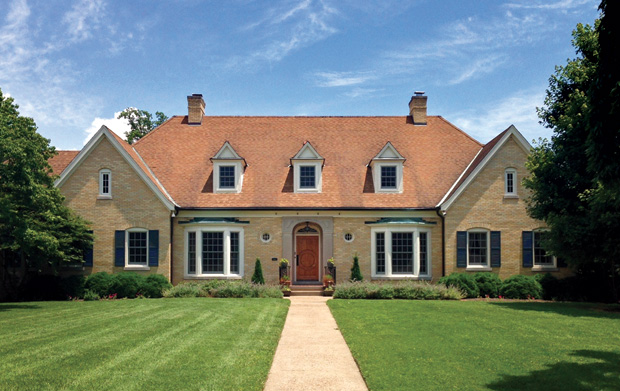 Next door, 654 Lombard is a busy home. Known as The May House, it was gifted to University of Evansville in 1980 by real estate developer Guthrie May, who lived in the house for more than 30 years. The home was built in 1940 for Robert Gray. Today it is the official residence of the University of Evansville president, and is often the site of university functions, including the freshman class ice cream social held each August. 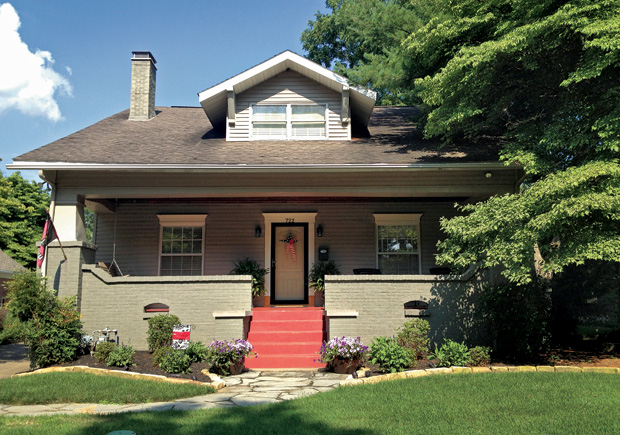 While Mitchell lived in the farmhouse on Lincoln Avenue, the first homes he built on Lombard were between Bellemeade and Washington avenues. Marchand’s notes indicate this bungalow, 722, was likely the first house in Bellemeade, built in August 1915 for Julius and Tillie Myer. He was a manager at the Home Federal Savings & Loan Association, established in 1914. 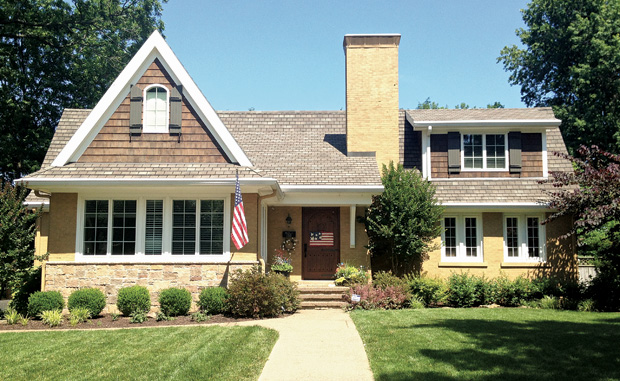 Erected beside the earliest house on Lombard is one of the newest renovations, 758. In 2012, this home was a movie set — several scenes in former Newburgh, Ind., residents and brothers Michael and Eric Rosenbaum’s movie, “Back in the Day” were filmed in this attractive Tudor. (See stories about the movie in Evansville Living September/October 2012 and January/February 2014.) 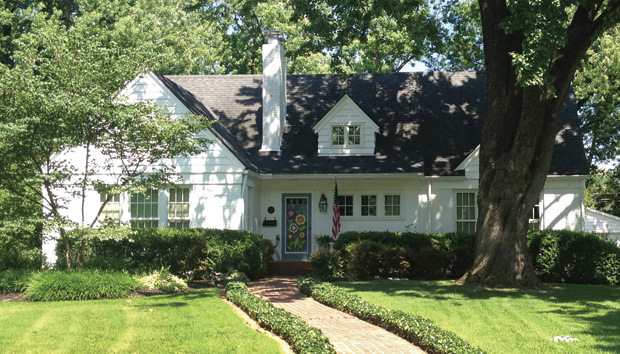 The beautifully manicured home at 808 Lombard was built in 1930 and is one of the larger homes on the street. It also is set further back from the street. 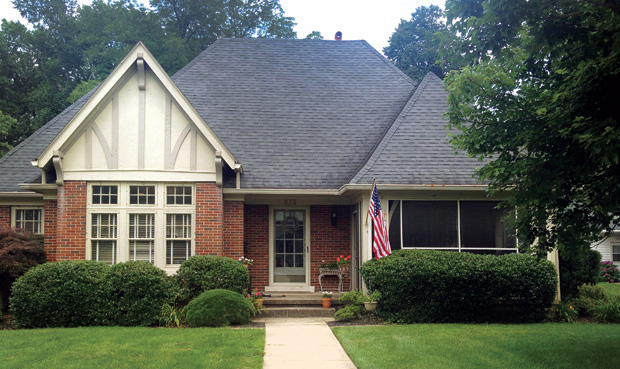 Continuing the tour of this tree-canopied street, the English Tudor Half Timbered home at 822 was built in 1925 for the Christian Becker family. Becker owned Becker Brothers Wagon at the turn of the century. Marchand noted that daughter Esther still was living in the home at age 92 in 1990. 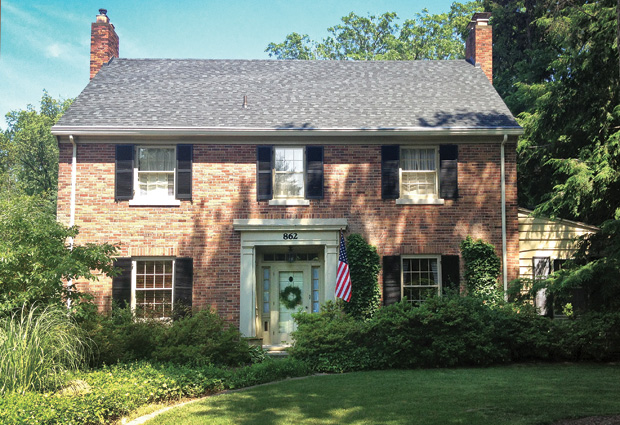 The stately Colonial Revival at 862 occupying two lots was built in 1938 for Robert and Elaine Pott. Pott was an engineer and inventor best known for developing the impact wrench that was patented by Ingersoll Rand. He also is the namesake of the University of Southern Indiana’s Pott College of Science and Engineering. The Robert and Elaine Pott Foundation has significantly endowed the University of Evansville, as well. 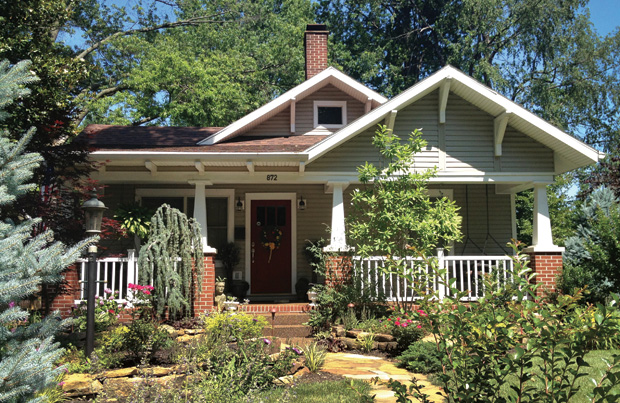 While I do not know the history of the charming Arts and Crafts style bungalow at 872, I admire its lovely gardens. 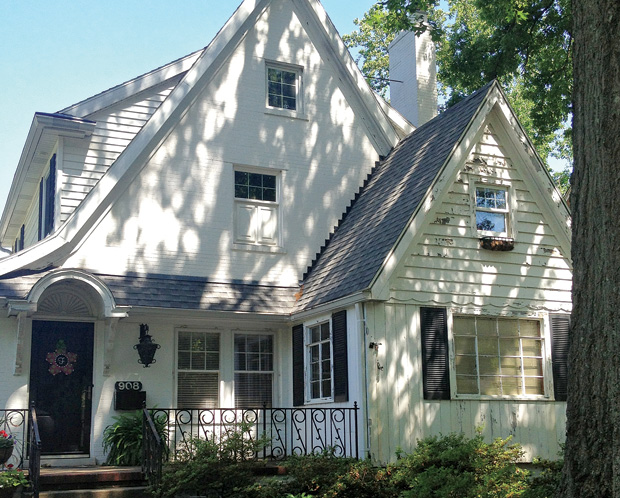 The English Revival at 908 was built by the developer Mitchell as a spec home in 1929. It did not immediately sell. In 1936 it was rented, and then purchased, by Phil E. and Elizabeth Drachman, owners of Drachman Chevrolet, the precursor of Kenny Kent Chevrolet. Drachman served as president of Evansville’s Redevelopment Commission in the 1950s and was an amateur artist and azalea grower — those efforts can be seen each spring in the home’s pretty bushes. Well-liked and widely admired, Drachman died in 1991 at the age of 89. 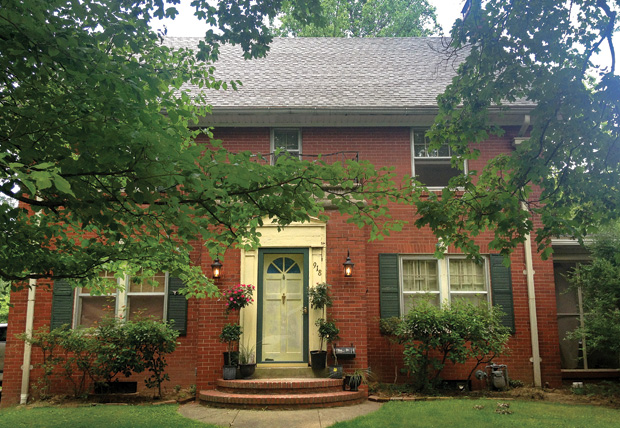 Amid the backdrop of the Jazz Age, before the stock market crash of October 1929, subdivision developer Mitchell built this handsome Colonial Revival home at 918 Lombard Ave. The first owner was John L. Martin, who was associated with the Ideal Dairy Company, founded in 1919 to offer pasteurized milk to the city. Later owners of the home were Jim and Emily Fowler, who moved there in late 1965. Emily, who became fondly known as the “Mayor of Lombard” for her watchful eye and neighborhood spirit, lived here until her death in 2009. 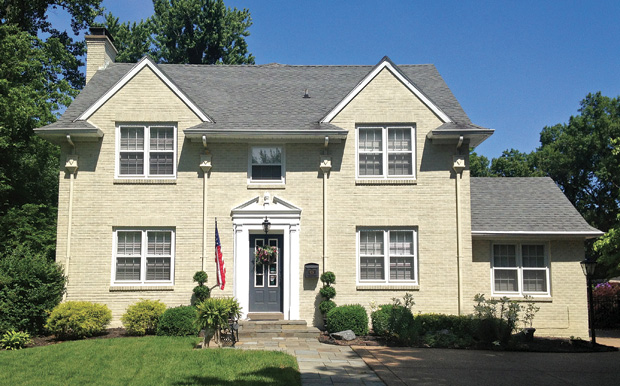 Next door at 928 is a beautifully restored Colonial Revival, built in 1936 by the Stovall Lumber Co. for Robert Burkert, a salesman with Burkert Walton Inc., a printing company founded in 1906 that is still operating in Evansville today. 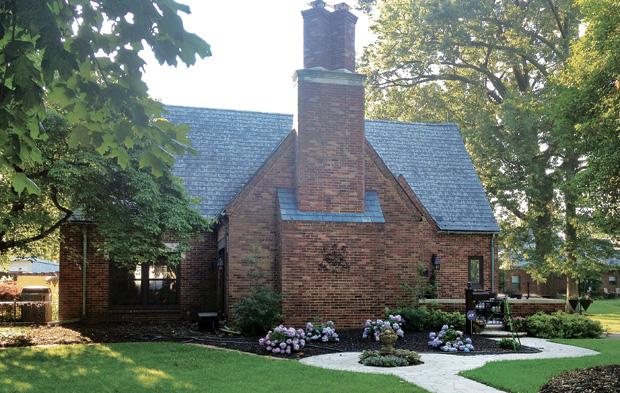 The charming brick and limestone English Cotswold cottage at 952, designed by renowned Evansville architects Anderson & Veatch, was built in 1937 for Harry B. Bourland, president of the Evansville Paint & Varnish Co.  — known today as Red Spot. The home’s unique façade is dominated by a large fireplace in its living room. 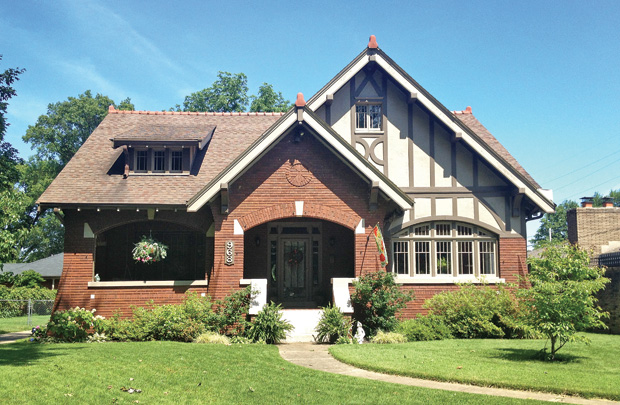 Former preservation officer Marchand’s notes indicate that one of the city’s finest examples of the bungalow style of architecture is at 968, near Washington Avenue. It was built in 1927 for Simon A. Schmitt, who owned a plumbing and heating business and also installed suburban water systems. In 1938, the home was purchased by William C. Welborn, an attorney and founder of the Conrad Baker Foundation. The foundation supported the Old Court House in its transition after the construction of the Civic Center. The home’s brick features an unusual diamond pattern. The house is adorned with half-timbering, as well as curved-topped windows and eave brackets. Indeed, it is one of my favorites, too. 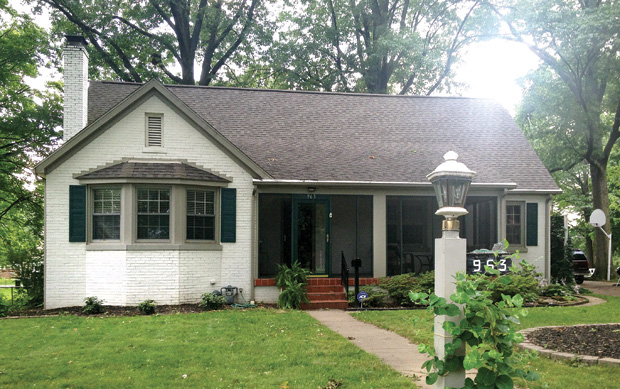 The founder of a now-closed but long favorite Evansville store lived at 963 Lombard. It’s known that Frank A. Baynham moved here from 768 Lombard in 1941. Preservation officer Joan Marchand’s notes make no mention of the Baynhams’ monkeys ever residing in the charming English cottage — they didn’t come along until the store expanded in the 1950s and monkeys were displayed in glass cages. For more than 50 years, customers flocked to Baynham’s on Main Street and later at Washington Square Mall, North Park, and Eastland Mall. 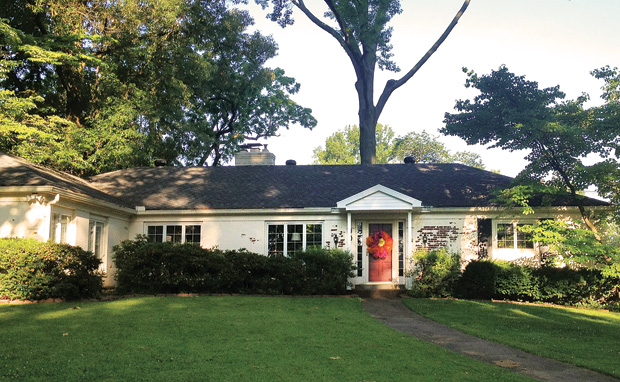 Marchand’s notes from her 1994 Historic Preservation Week tour tell the story of the sprawling ranch home at 901 Lombard. It was built on two lots in 1940-1941 by George E. Cameron, described by Marchand as having “breezed into Evansville on the late 1930s oil wave.” Cameron’s brother, Arthur, built the white brick Colonial mansion at 411 Hebron Ave. (located off Lincoln Avenue on the hill behind what is now Bethel Temple Community Church) for his actress wife, June Knight Cameron. 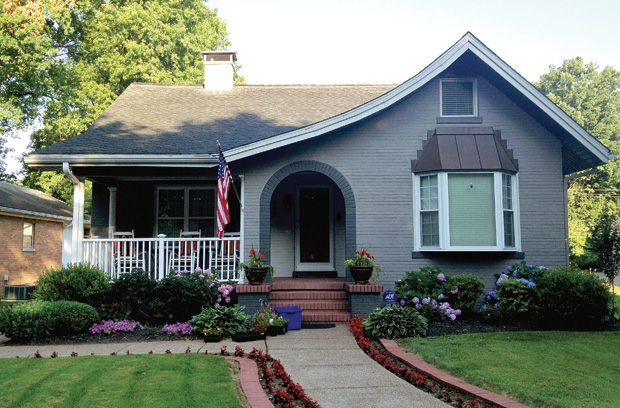 The painted brick cottage at 807 with an arched porch entrance was built in 1928 for Frank J. and Laura Lohoff. He was a sales representative for Evansville Tool Works. 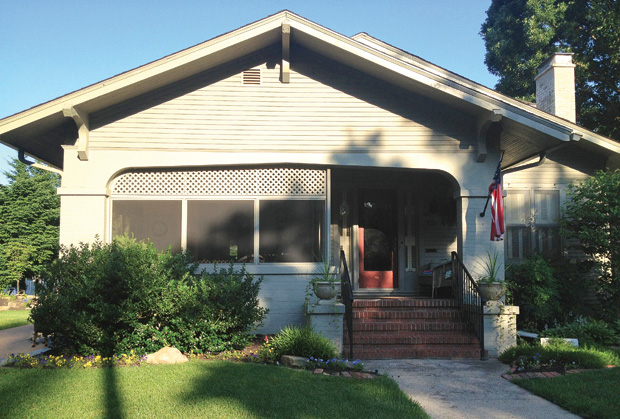 A grocer, Philip Hoelscher, was the first owner of this 1921 bungalow at 773, promoted as having five “spacious rooms,” including a breakfast room and pantry. I admire the breezy porch. 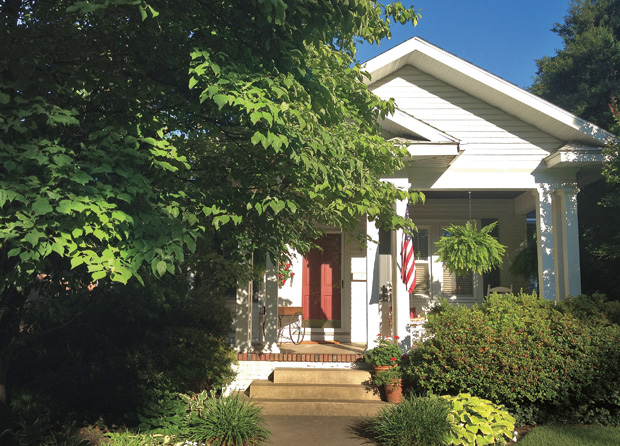 A lovely classical portico and porch define this 1926 home at 761 built for Jode and Mada Hay. He was associated with the Orr Iron Co. and made a mortgage loan for $2,900 with Peoples Bank for the home. 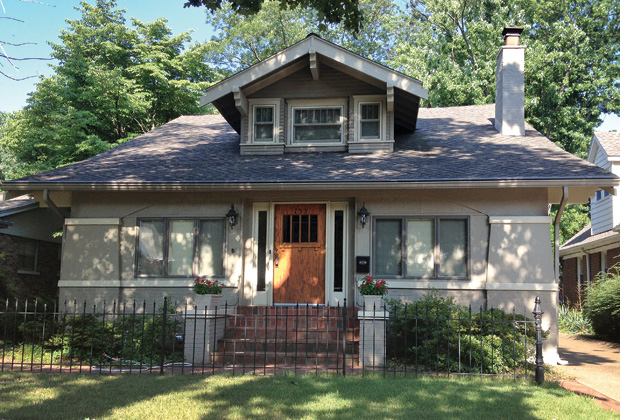 One of the oldest homes on Lombard is the attractive 1915 bungalow at 753 built by Mitchell as a spec home. 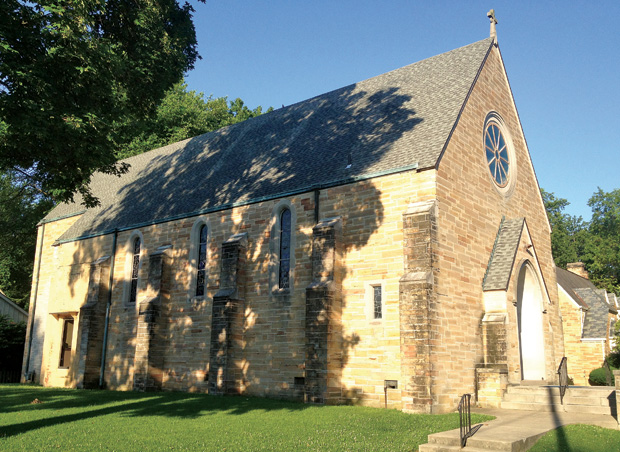 As development continued on Evansville’s East Side, a survey was conducted to determine if East Siders would support a church; most of the city’s churches were within the city’s core. The First Community Church, 3407 Bellemeade Ave., was established in 1940 to “embrace all doctrines and creeds.” Designed by a St. Louis architectural firm, the church on the corner of Lincoln and Lombard avenues was erected in 1950 for $100,000. The church is a French Normandy style and was built with St. Meinrad, Ind., sandstone. Today, it is the home to the Church of God of Prophecy. 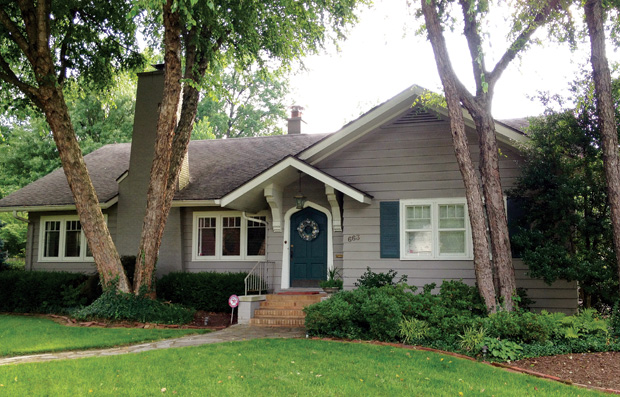 The home at 663, built in 1925 for the Walter Karsch family, is similar to another home on the street, 823. Karsch was Secretary of American Trust & Savings Bank, located at 6th and Main streets. The home is defined by its massive front chimney and has been significantly expanded through the years. 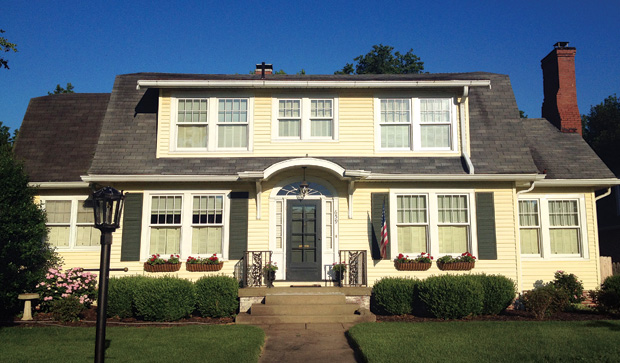 Next door at 659 is another John R. Mitchell spec home. Mitchell was living in this Dutch Colonial at the time of his death in 1944. This home, too, has a twin — on Parkside Drive in Akin Park. 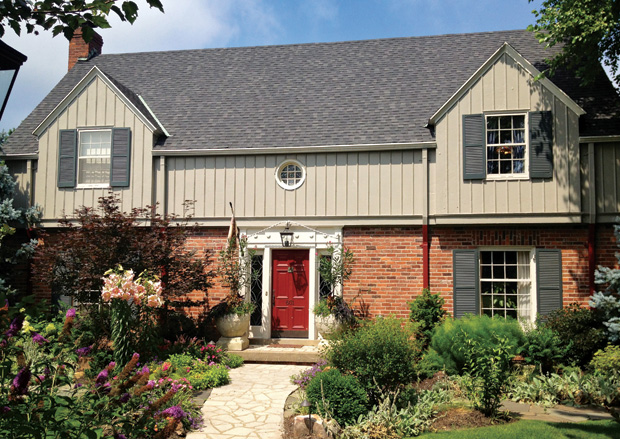 My family lives at 601, at the corner of Lincoln and Lombard avenues. Our home, a Colonial Revival, according to Marchand’s notes, was built in 1938 by Roy Ryan of Ryan Construction Co. as his personal residence. In 1943, the Ryans moved to McCutchanville and Bernard Schnacke, brother of E.F. Schnacke, who lived across the street in the French Provincial home, purchased the home. It, too, has been renovated and expanded, and extensive landscaping now largely shields it from Lincoln Avenue — much busier today — where John R. Mitchell first began to plan his beautiful meadow.

Grill Out and About