Made for the Stage

Seven-year-old Ange Humphrey may not have known much, but she knew one thing for certain — she wanted to be a movie star.

“But when people ask you what you want to be and you say you want to be a movie star, everyone laughs,” says the Calhoun, Kentucky, native. “No one was taking me seriously, but I was quite serious.”

So the young Humphrey set out to learn a new word — entertainer.

“It was such a wonderful 50-cent word I could throw right out there,” she says. “I always had that in my mind — I was made for the stage.”

Humphrey has seen many stages during her career; from theater to television to church, the 65-year-old Evansville resident has done a little bit of everything in her life and is not inclined to slow down any time soon.

“I’ve never been intimidated,” she says. “I don’t think I’ve ever been nervous on television or in front of a crowd ever.” 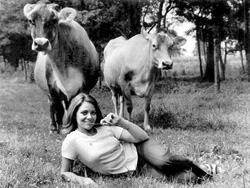 Though many know her from her years as the “down home weather girl” on WLKY, Louisville, Kentucky; as an anchor on the former WEVV 44 channel; and her current run on WEHT’s “Local Lifestyles” show (airing at 11 a.m. Monday through Friday), television wasn’t always in the plan for Humphrey. In fact, her eyes were set on a different type of stage.

“I had Broadway on my radar. I was going to be big in musical theater,” she says. “But you know, life is interesting.”

It could be said Humphrey has made a career out of trying new things. For her, following an interesting, winding path has been more fun than following the straight and narrow line.

Her break came during her college years at Murray State University, Murray, Kentucky. Just one semester shy of her college graduation, a friend called from Louisville with an idea.

“She said she had to move from her television job and asked me if I wanted it,” says Humphrey. “I said ‘Sure, but what do you do?’ I didn’t even know what she did.” 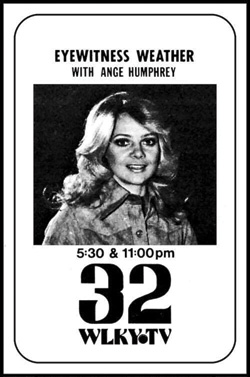 However, her lack of knowledge did not stop her. Barely 21 years old, Humphrey packed her bags and headed to Louisville to host “Dialing For Dollars” on WLKY. It was the first step into television for her. After less than a year as host, WLKY asked her to take over the weather forecasts.

“This is a really great story,” she gushes with a smile. “I didn’t know anything about meteorology, and I’m not too sure I knew much about geography at that point. But because I’m me, they said I would do fine.

“So the first time I had to do the weather, I had no idea what I was doing. It was back in the Marcia Yockey days, where you drew your own map and stuff. I didn’t know an isobar from a state border,” Humphrey laughs. “When they cued me to go on air, I realized I didn’t have a clue about actual regions of the country. So I totally winged it. And after a few days, I thought, ‘I can do this.’” 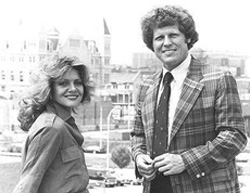 “For somebody like me who gets bored really easily with something, my life has been a fun time,” she says, “Because I was engaging with different people, and I liked that.”

Humphrey has the same phrase she uses when describing the twists and turns throughout her career — “It was so fun!” There’s a story for every encounter, every job she has taken in her life. From entertaining crowds in the thousands at the KentuckyDerby to passing professional wrestlers in tiny hallways at the Superstation TBS, it’s been one adventure after another.

WEHT/WTVW meteorologist Ron Rhodes has partnered with Humphrey on Local Lifestyles for the last two years, but has known her for 20 years. He sums her up simply, “Ange is a people person.” 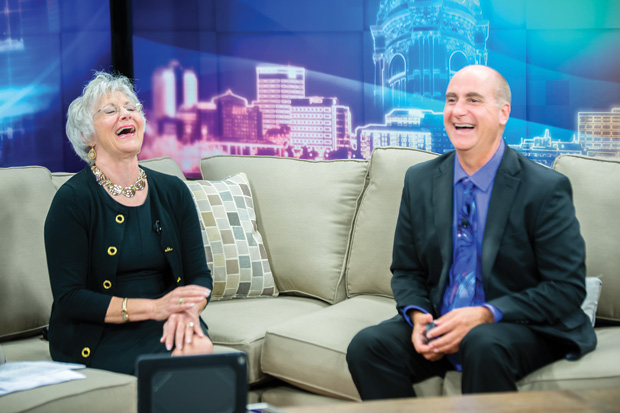 ▲ Above, Humphrey loves to put on a show and there’s no better place than on Local Lifestyles with her co-host meteorologist Ron Rhodes. “Who wouldn’t have fun working with Ron?”says Humphrey. Below right, Humphrey’s church Fresh Air Community shares space with Pastor Roberta Meyer’s Grace and Peace Lutheran Church on Boeke Road. The two congregations come together on many occasions for different events, says Humphrey.

“She loves being around people, and she truly cares about others,” he says. “I’m absolutely amazed by her energy. She anchors Lifestyles daily, she’s also the pastor of her own church, and I really don’t think there’s an event in Downtown Evansville she doesn’t attend.” 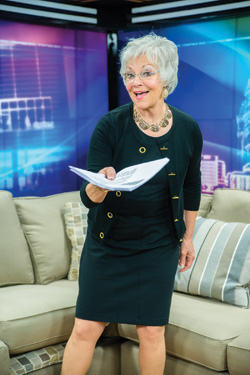 Humphrey had been away from broadcasting for 14 years when she was offered the host position on Local Lifestyles in 2015. After WEVV 44 closed its doors in 2001, she did a stint at Oakland City University, Oakland City, Indiana, as director of marketing while she finished her master of divinity degree. She had worked in Fresno, California, for a time at Ubiquitel teaching sales representatives before returning to Evansville.

After serving as interim pastor at American Baptist East church, leaving there to start her own church Fresh Air Community of Faith (a congregation Humphrey describes as welcoming and affirming), and doing a stint in retail at Dillard’s, the stage called to her once again.

“I was ready for something else, so I sent audition tapes out again. Before you know it, I was having a conversation with the news director at WEHT Bob Freeman,” she says.

Humphrey would go on to fill in for 10 weeks on Local Lifestyles while Laura Kirtley was on maternity leave. When Kirtley decided to leave the show, WEHT offered Humphrey the host spot.

“Isn’t that interesting?” muses Humphrey. “If nothing else, when people read this, I want them to know, don’t give up on yourself. Don’t let age or something you view as a limit to limit you.”

“I enjoy the joy and fun she brings to the show. I consider Ange a good friend,” says Rhodes. “She is such an upbeat and energetic person and that energy rubs off on the people around her.”

For Humphrey, life at the moment can only be described as “so good.” She and her husband of 15 years, George, really “get each other and support each other.” Her church Fresh Air gives her a chance to teach and lead others, she continues to write (her occasional column “Faith Matters” appears in the Courier & Press), and she speaks to different organizations.

“I’ve enjoyed, in all of my careers, that powerful bond you have with other human beings and how hungry we are to be connected,” says Humphrey.

The future could be just as winding and twisting for Humphrey, who says she doesn’t have a problem with that at all. 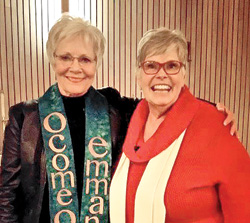 “I’ve learned so many things, and I plan to learn a lot more,” Humphrey adds. “You’ll have to check with me this time next year to see where I am.”

She has a hunger for knowledge and curiosity that she nurtures every day in her interactions with those around her. They are traits Humphrey encourages others to have as well — along with taking speech classes and reading, she says.

“Whatever is your past or your present, it’s not going to be the last thing said about you if you don’t let it be,” she says. “Remember that you are writing your story all the time and the end is in your hand.”