The date June 16 has meaning for Mike Allen.

In 2014, Allen and his Evansville Christian School team signed official paperwork for the acquisition of land to build a stand-alone high school for the organization. The move started a three-year countdown to break ground.

Fast forward to June 16, 2017 — Allen, who serves as head of school and middle and high school principal, stands in the brand new building along Epworth Road and accepts the keys to the new Evansville Christian High School.

“I had on my calendar I set three years ago a note that said, ‘Hey, be sure to launch Evansville Christian High School,’” he says with a bright smile. “We got the keys three years to the day. It was just really neat.”

The project has been an eight-year endeavor by the families, students, staff, and community of Evansville Christian. And it all started with an informational study.

In 2009, the financial resource development firm Jerold Panas, Linzy & Partners of Evansville and the University of Southern Indiana asked the Evansville community about the need for an interdenominational Christian high school in the area.

“Overwhelmingly the answer was yes,” says Allen. “And overwhelmingly again, the study said the organization to do this was Evansville Christian School.”

Evansville Christian’s roots began in 1975 when the first school was founded on the mission of providing exemplary learning environments to educate and equip students with a Biblical world view, to confidently engage the culture, and impact the world for Christ. Over the last 40 years, the organization has grown to a student base of more than 800 in 2017. At the start of the 2017-18 school year, ECS students will occupy five campuses across the area, partnering with multiple churches in Evansville; Newburgh, Indiana; and Henderson, Kentucky.

Completing a new education building is no easy, or quick, task, however. But it was a job the ECS board was up to, says board president and owner of Heston Insurance David Abbott.

“We felt our community needed an option Evansville Christian High School would bring to the families,” he says. “Given the positive feedback from the sources we engaged to advise us, we just felt we were obligated to move forward.”

That dedication would pay off as the project broke ground in June 2016 and wrapped up about 11 months later. ECS brought in PCI/Skanska as the architect and construction manager of the build, as well as a number of other contractors to the job site.

“It’s exciting to see their love for this. They are a part of it, through and through,” says architect and design project manager Jennifer Kissel. “That’s how I approach my projects in architecture, so it’s nice to have that related on the opposite side.”

Kissel and construction project manager Pete Giannini enjoyed the relationship with ECS during the build, especially the dedication of Allen and Paul Bair, ECS’s chief financial officer and director of advancement. 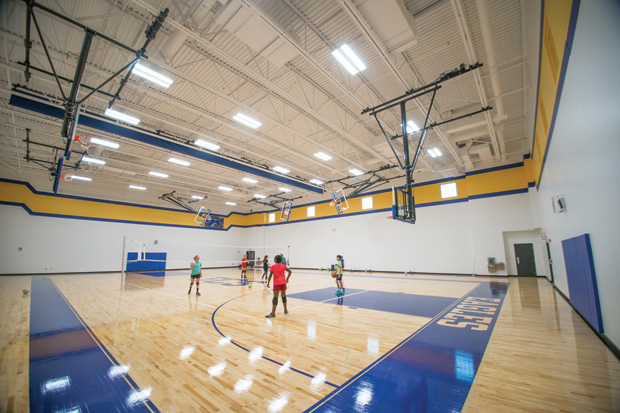 ▲ Above, the new basketball gym located at the south end of the new Evansville Christian High School combines the school’s colors. Below right, Jennifer Kissel and Pete Giannini of PCI/Skanska helped ECS with design and construction of the new high school. Both say they are proud to be a part of the project to bring a new school to the community.

“Mike and Paul were very involved with all the contractors, but they let us do our job. When there were challenges, we worked together to solve them,” says Giannini.

The finished building — on a multi-acre site acquired by ECS from Epworth United Methodist and Crossroads Christian churches — is not like a traditional school, say Giannini and Kissel. The two-story facility is void of the typical long corridors and separate wings found in many schools.

“The difference here is we have the heart of the school being the main area, where students will interact every time they come out of a classroom,” explains Kissel. “It builds people communicating, seeing each other, and learning how to work together.” 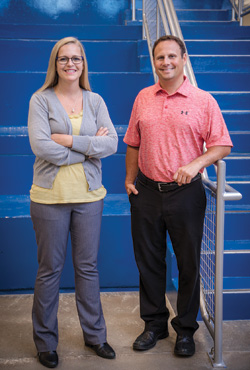 This center area features tables for lunch as well as audio and visual equipment for presentations. A section of gathering stairs serve as a type of theater seating in the area as well. The eight classrooms were designed and built as flex spaces, allowing divider walls to be set up or taken down to utilize the space for different functions.

“The idea is the staff puts more into the students and less into the spaces,” says Kissel, “because it’s really about the teaching that goes on in there and not as much about the room being full of tangible items.”

Incoming freshman Moriah Dunham says she’s excited to have a new campus to call home as well as being a part of growing Evansville Christian.

“Just being surrounded by people who share the same values and views as me is exciting,” she says. 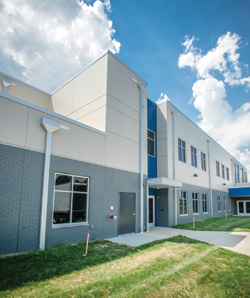 From the perspective of parents, the new campus affirms the trust in ECS to provide the education for their children they are looking for.

“For us, the decision to continue on with Evansville Christian at the high school level was a no brainer,” says Ali Rugani, who has three sons at ECS, including one incoming freshman.

“I want my children to have a high school experience that will build them up as leaders, with high morals, servanthood, and compassion for others,” she says. “ECS gives them that along with high academics, competitive athletics, caring staff and teachers, and more.”

“I’m very excited to see the students in here,” adds Abbott. “Having our own facility like this at the high school level, it’s just been fun to be a part of.”

Though the campus promotes an idea of growth for ECS, Allen says it’s about more than that to the organization. For the families, students, and staff, the high school represents a way to continue to educate children under the principles the organization was built on.

“Every time we do chapel, every time we sit here and eat lunch, go to classes … these kids are going to be developed as leaders, as people who understand the value of people,” he says.