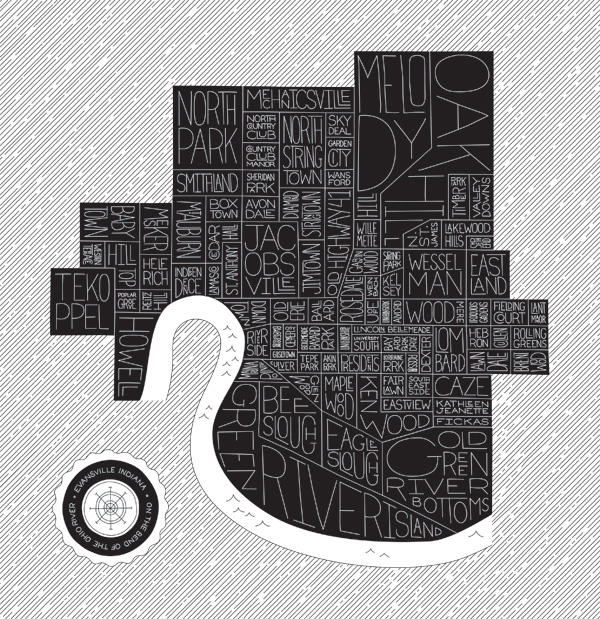 Like most cities, Evansville is made up of neighborhoods. From the long-forgotten Babytown to the often-discussed Jacobsville, the city’s history comes from its small but distinct districts.

For the first time, the Evansville Department of Metropolitan Development, with help from Matt Wagner Design, has compiled a map showing all the known historic and contemporary neighborhoods within the city limits. From Independence to Boxtown, it’s a history lesson and a piece of art all at once.

“There is no Babytown anymore,” says Kelley Coures, executive director of the Department of Metropolitan Development. “They haven’t called it Babytown (the area around Mater Dei High School) in more than 100 years. Smithland hasn’t been called that for a long time. But then there are places like Jacobsville, which still have active neighborhood associations.”

The idea came from a similar map produced by Indianapolis and Marion County, Indiana. That map showed all of the historic districts in Indianapolis, of which there are literally hundreds.

“It’s not a wayfinding map,” says Coures. “It is an artistic representation of geographic areas. It tells you where neighborhoods are in an interesting, creative way. It’s always good to know where things came from.”

Every district on the Evansville Neighborhood Map has a story to tell. Some neighborhoods are still easily recognized, like Howell, Tekoppel, Mesker, Stringtown, Oak Hill, and many more.

The money for the map came from a federal grant. Matt Wagner Design was chosen to create the map, which took nearly two years to complete. Matt Wagner and Rachel Wambach did the physical mapping work.

There were 500 printings of the map made, which are for sale as posters at the Arts Council of Southwestern Indiana for $25 apiece. The proceeds are split evenly between the Arts Council and the United Neighborhoods of Evansville.

Prints can be purchased at the Arts Council office inside Innovation Pointe on Main Street.

For more information about the Arts Council of Southwestern Indiana, visit artswin.org.