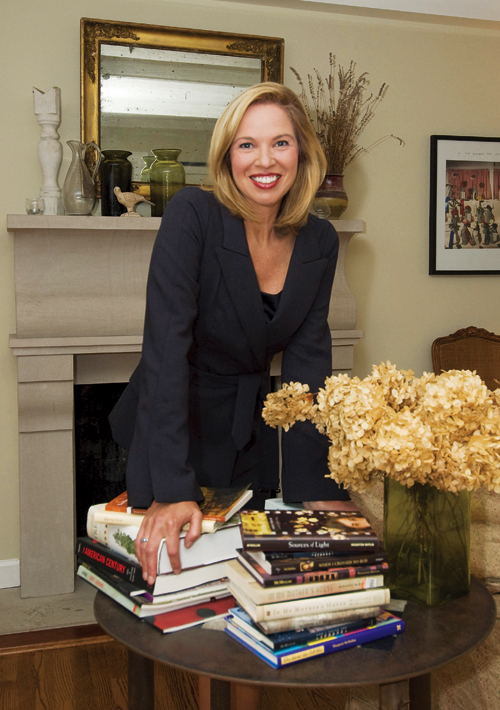 Years ago, in a high school in Jackson, Miss., Margaret McMullan’s sister ran for school president. She gave a speech that riveted students and teachers. Impressed, McMullan’s seventh grade English teacher told McMullan she would never write as well as her older sister. McMullan’s secret: She had penned her sister’s speech. From that moment, McMullan knew she wanted to be a writer. Six award-winning novels later, McMullan, a University of Evansville English professor, shows how wrong her former teacher was. She also has written for Glamour, The Indianapolis Star, the Chicago Tribune, and National Geographic for Kids — to name a few. Did we mention her teacher was wrong?

Sources of Light, her latest book, joins The Help by Kathryn Stockett as a piece for One Book/One Community, a community program bringing together readers throughout the Tri-State to share their experiences reading the same book during October culminating with a visit from Stockett on Nov. 4. McMullan’s novel is the young adult companion piece, and each author explores race relations in the South during the 1960s. The topic is close to home for McMullan, a Newton, Miss., native who lives in Evansville with her husband, Pat O’Connor, and their son, James. “Race issues are in the history of our state,” McMullan says, “and they also reflect the history of our nation. I still think it’s one of the biggest issues today.”

— McMullan and her husband Pat O’Connor once were contributors to Evansville Living. Find their archived “He Said, She Said” columns.

When did you know you could be a writer?
I had a wonderful high school teacher named Alva Lowey. She was from Alabama, and we connected when I took her class at Lake Forest High School in Lake Forest, Ill., a northern suburb of Chicago. She gave these great assignments, and she typed out all of her responses and comments. She was a very wise, dignified older woman, and she was very professional. She would not allow me to get overly sentimental about missing Mississippi. She submitted my short story, “Bees,” to a contest sponsored by Scholastic Magazines. It won. I got a gold pen and Mrs. Lowey’s approval. I was hooked.

I think it’s important to all of us that we understand all the sides to any issue. Most issues in life that people feel deeply about are not clear-cut. There are so many gray areas, and those gray areas interest me the most, as a writer and as a human being. It worries me when some people are so sure of their own opinions or their own brilliance.

Did you ever expect you’d write novels for young adults?
Writing for young adults was a happy accident. I wrote How I Found the Strong, which my agent sold in a week. When she told me she sold it as a young adult novel, she had to explain to me what a young adult novel was. Then, she immediately told me to forget what she said. She told me not to think about categories when I write because what the editors liked so much about the book was that I didn’t condescend to the reader. It was great advice. Just tell the story in the best way you know how. Take the reader through the experience. It’s the same advice (American author) Eudora Welty gave, and it’s what I constantly tell my students.

What separates good writing from bad writing?
Vivid scenes and great sentences go a long way. Most good writing is just mechanics. I happen to be a big fan of complete and clear sentences. Careful word choice, punctuation, and syntax show a real craftsman at work. And it’s not that a sentence has to be fancy or long. There’s nothing wrong with a short, well-placed, subject-verb sentence. “Jesus wept” packs a lot of punch.

That said, if the story is riveting, the reader might forgive a host of mechanical sins.

This fall semester, you’ll be a Fulbright professor of English at the University of Pécs in Pécs, Hungary. Founded in 1367, it is Hungary’s oldest university. What do you hope you take away from the experience?
My mother’s family, the Engel de Janosis, originally is from Pécs, beginning about 1820. I’ll be researching two particular family members for a new book. I was both surprised and thrilled to discover that one of the family’s estates is still there. My son James also will be conducting his own research into his family’s history. The take-aways from this experience are endless.