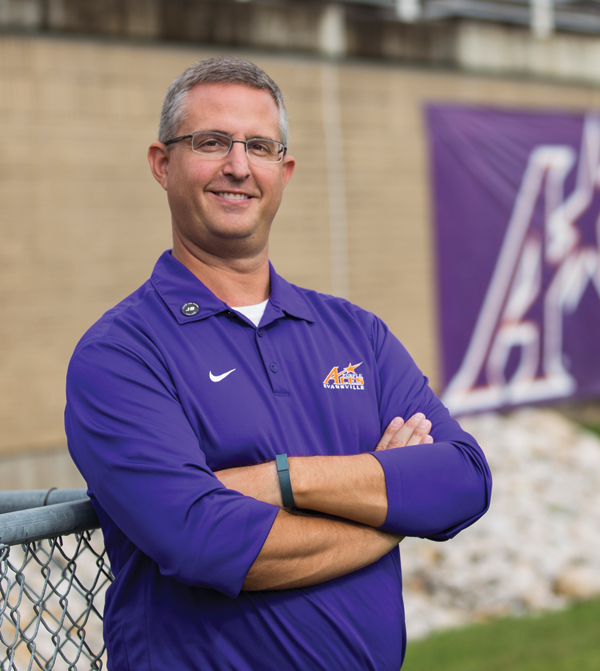 Mark Spencer was sure he would become a basketball coach. Studying for his master’s degree at Georgia State University, he dual-majored in sports administration and coaching and realized coaching wasn’t his forté.

“I found I am an analytical accounting mind; administration is where I’m best suited,” he says. “Doing the business side of things is really where my mind goes. I like to fix problems.”

Spencer has worked with athletic departments at universities across the country, big and small. What drew him to athletics,
he says, is the chance to make a difference in students’ lives.

“It’s those kinds of relationships that really make the difference between just having a desk job and working in athletics,” says Spencer.

I feel like I have been following Evansville for about 10 years, since Bill was here. I had an idea of what Evansville was about; I was excited to have the opportunity. I knew it was a place of growth.

What have you enjoyed most about Evansville as a community?
It’s tough to really narrow it down. Evansville is as big or as small as you want it to be. It’s truly Midwest. I’ve met such a great range of people. It is a melting pot. You have the bankers, the insurance folks, the mom-and-pop shop operators, and the farming community. And all of them love their Aces.

We want to give them more recent history they can be excited about. They really embrace the school, our student athletes, and what we’re about. So it’s been great to be welcomed with open arms into the community.

What work do you feel most proud of in your two years at UE?
The deal with ESPN and the Missouri Valley Conference (MVC), which allows us to broadcast all of our home men’s and women’s basketball and soccer, women’s volleyball, baseball, and softball games. Every MVC conference member does the same, so fans are able to watch all of the MVC road games as well. The deal brought a producer and director onto our staff. They’re also working in concert with our communications department to help bolster UE’s athletic communications degree to recruit students. They actually teach classes.

The deal integrates so many pieces on campus. Athletics so often can be seen as a divider. We are, for good or for bad, the front window of the university. To be able to represent that through ESPN 3 game broadcasts, while also integrating the communications department, goes exactly with what I have as a professional goal for all my student athletes and really ties into the university’s mission.

What’s your favorite sport?
That’s a tough one. I played basketball, I’m a college basketball junkie. I’m also an absolute soccer fanatic, whether it’s college soccer, Major League Soccer, or English Premier League. Those are the sports I know.