Jeff Friedlund was fresh out of college, a graduate of Vincennes University, when he started working at Spa City U.S.A. in 1997.

An Evansville native and North High School graduate, Friedlund began his career by delivering hot tubs his parents Bob and Lois Schmitt sold at their business. Eventually he would work his way up to owner and operator of the home recreation company.

Spa City itself was a new business when Friedlund came on board. Working out of a small space he equates to the size of a garage, Spa City sold more than just hot tubs in the beginning.

“We were just selling everything,” says Friedlund. “From patio furniture, tanning beds, saunas, pool tables, grills to swimming pools. We sold a lot just to get going.”

In 2001, Lois and Bob were ready to hang up their hats and retire. They were the sole owners of the business and prepared to sell the company. By this point, Friedlund had expanded his duties at Spa City. Not only would he go on delivery calls, but he worked on and serviced the spas sold, and had his share of sales experience.

Friedlund says he didn’t want to see Spa City sold to someone else, so he stepped up and told his parents he wanted to take over.

Since its beginnings in a small space on the East Side, Spa City has moved to a larger location at 6100 E. Maxwell Ave., a warehouse space that allows Friedlund to utilize a 13,000-square-foot showroom. Walk into Spa City on any given day and Friedlund has about 50 to 60 hot tubs on the floor, ready to sell. This is something not common with hot tub retailers, he says.

In Spa City’s 21st year of business, Friedlund and his staff concentrate their inventory on hot tubs, occasionally installing swimming pools and selling grills. The quality of products and customer service has earned Friedlund and Spa City a reputation among clients, both new and repeat.

“I think people like our service, our friendly demeanor,” says Bill Alexander, a sales representative who has worked with Friedlund for 15 years. He also started in delivery at Spa City before working in sales. “We try to answer all their questions and we don’t put people off.”

“People just keep coming back,” adds Lois, “and by word of mouth, people tell others to go to Spa City and see Jeff. Everyone knows who Jeff is.” 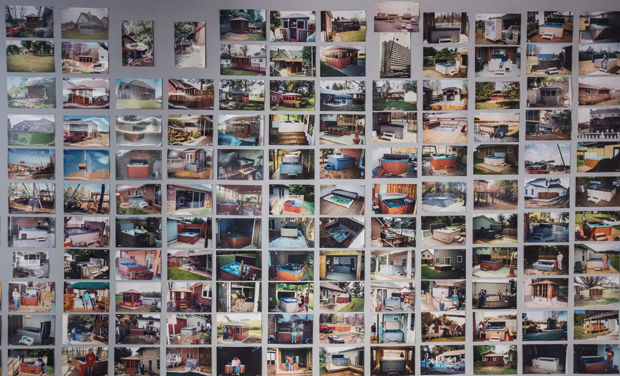 ▲ Tales of success  – Inside Spa City’s store, before entering the showroom floor, customers are greeted by photographs of spas installed by the company over its 21-year-history. Owner Jeff Friedlund credits the success of the business to the quality of customer service offered by the staff, which creates lifelong customers.

Spa City was born out of a want to help other people, says Lois.

“It started out very small,” she adds. “The place we started in didn’t have plumbing or anything. It had just enough room for a desk and a couple of hot tubs.”

Lois and her husband Bob opened the storefront in 1995 to help a friend in Tell City, Indiana, who built his own spas. When he ran into financial trouble and difficulty marketing his hot tubs, the couple offered to step in and help, opening a showroom in Evansville for his products. They then hired another friend — a salesman who had recently lost his job — to sell the product.

“We put a little ad in the paper about the business and we sold out,” says Bob. 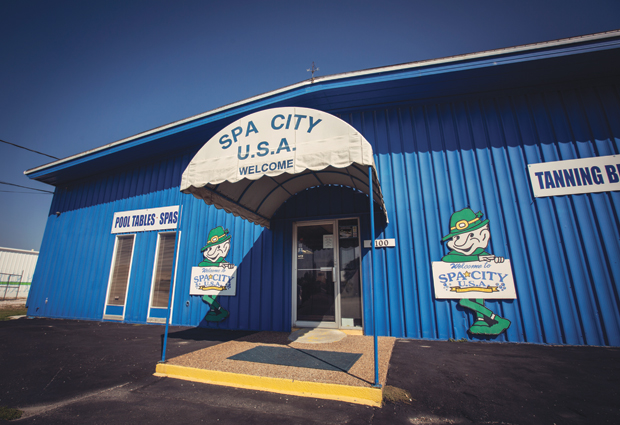 ▲ Off the Beaten Path – Spa City opened its doors in 1995 in a small showroom behind Lea Matthews Furniture and Interiors on the East Side. After a year and a half, the company moved to its current location on East Maxwell Avenue.

Just after Spa City’s one-year anniversary, the Schmitts purchased the location on Maxwell Avenue. From there, the business only grew. Their inventory expanded by purchasing overstock models from factories in Florida. When the spa manufacturer Gatsby went out of business, Lois and Bob bought the company’s entire inventory, allowing them to showcase close to 100 tubs in their warehouse.

“It started on a whim,” says Lois, “and it turned out to be a fast-moving, big business.”

When the couple decided it was time to leave the company, it wasn’t a surprise their son Jeff wanted to continue in their place.

“Since Jeff had worked there, he knew the business,” says Lois. “He worked up to owning it; he didn’t just come in and say, ‘Oh, I want this.’ We were ready to get out and he wanted it. He was ready to get into something.”

For 15 years, Friedlund’s hands-on approach and work ethic have grown Spa City into one of the largest spa retailers in the Tri-State.

Through the years, the business had its share of rough patches as well as achievements. During 2006 through 2009, when most businesses were struggling with the economic recession, Friedlund says his company wasn’t immune to the slump. Before 2006, Spa City would sell about 120 spas a year. During the three-year downturn, that number dropped to 50.

“Instead of giving up, we kept going, kept pushing,” says Friedlund. “Now we’ve double and tripled our sales since 2009.”

Spa City’s slogan says the company is “A Bubble Above the Rest,” harkening to its devotion to service and customer relationships, which Friedlund emulates and stresses to his staff. Spas can provide more than entertainment for families. Spa City helps customers find the right hot tub for their needs, whether it be relaxation to relieve stress or hydrotherapy to ease joint pain or arthritis.

The company serves clients within a 100-mile radius around Evansville. Jobs do not just end when the spa is installed either, adds Friedlund. The company employs just five staff members, many who have been with Spa City for more than 12 years.

“There are quite a few of us here who know everything about all of the hot tubs,” says Alexander. “So when a customer comes in, they’ll know we know what we’re talking about.”

“We’re not paying a high rent or overhead, so it helps pass on savings to our customers,” he says.

Spa City’s quality spas are important to Friedlund as well. All three of the spa manufacturers he carries are made in the U.S., with one located in Fort Wayne, Indiana, and another in Nashville, Tennessee. Many competitors’ spas are manufactured outside the country, he says, in Mexico or China.

“The quality of a hot tub built in the U.S. meets higher standards,” he adds. “They have to meet a certain qualification when they are built here.”

“We make sure we get the right hot tubs that fit our market, the ones our market would readily accept,” adds Alexander.

The elements of Spa City merge to give customers an experience as enjoyable as sinking into the luxury spas they purchase.

“Customers refer others to us based on their experience with us,” says Friedlund. “When we hear people say that, we know we’re doing something right.”

Though Friedlund is the sole owner, his long-time employees have seen little difference between Jeff the deliveryman, service tech, and salesman, and Jeff the business owner. 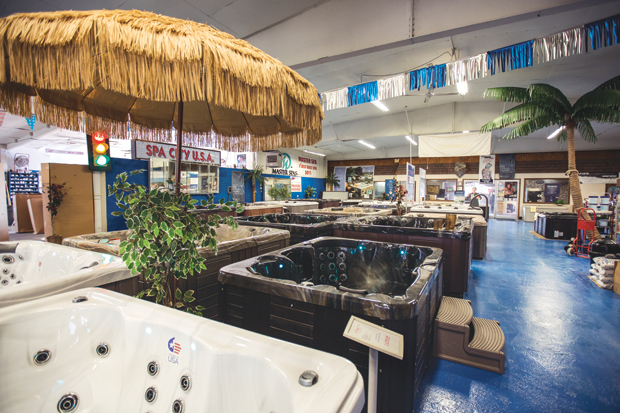 ▲ The building offers Friedlund 13,000 square feet of space to showcase the company’s products. Spa City keeps anywhere from 50 to 60 hot tubs on hand ready to sell. Friedlund says this is more than most dealers keep in-house.

“He’s definitely a hands-on owner/operator,” says Alexander. “He enjoys that. He likes getting out there on deliveries, doing repair work when he can. That keeps him in the game; keeps a hand on the pulse of the customers.”

That dedication drives Friedlund every day. As a husband and father of two young daughters, he juggles after-school practices and family time with answering phone calls and making sure things run smoothly. The mentality benefits his company, helping him retain customers, create repeat clients, and produce word-of-mouth advertising that brings in new business.

“You always hear stories from people, customers who come in and say they’ve had horrible customer service elsewhere,” he says. “I don’t want someone to say they would never come back here because of bad customer service. That’s not how I want to be known.” 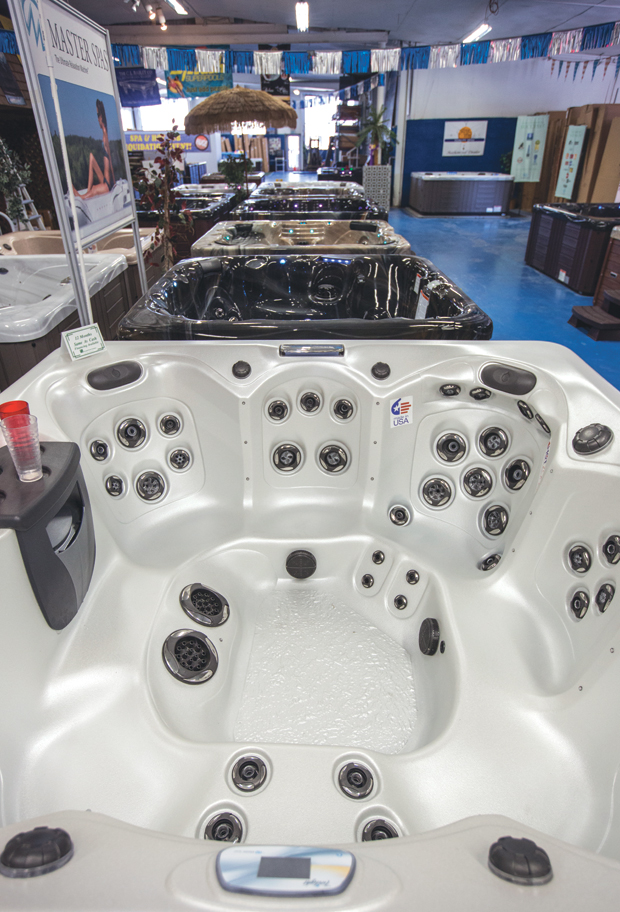