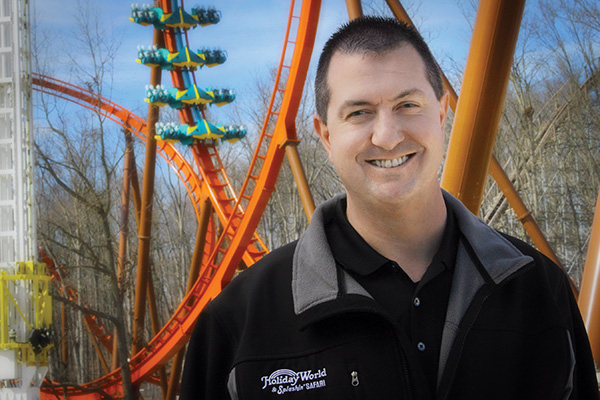 When Matt Eckert was a boy visiting Santa Claus Land in Santa Claus, Indiana, he never dreamed he would one day become the president and CEO of the theme park. He actually thought he would become an optometrist, until he realized science wasn’t his niche.

Now, Eckert is going into his 18th year working for Holiday World & Splashin’ Safari and has seen tremendous growth since he first joined the company. In 2000, the park was seeing more than 500,000 guests each year, and now averages about a million every season.

“We are in a business that is very dependent on a lot of different factors for success, so you always have to be ready to turn right when you thought you were going to be turning left,” says Eckert. “We just have to roll with the punches and do the very best we can, and we’ve done so and been very successful with it.”

What is something you think people would find most surprising about working at a theme park?

I think probably one of the biggest questions we get asked quite often is, “Since you close down in October, you guys pretty much get to take off until you pick back up in May, right?” That’s totally not the case. We’re actually probably busier during the offseason than we are when we’re actually open. It’s just a different kind of busy. I think people would be very surprised to know what all goes into making the magic happen.

Is there a shift in your role from offseason to during the summer?
Definitely. I would not just say my position, but also every position throughout the company. Right now, we’re definitely in planning mode, and we’re looking into long term, strategic planning for the next five to 10 years. But come June their job is going to be totally different. They’re going to be doing something totally different than what they’re doing at the present moment.

What was it like coming in as the new president and CEO to such a longstanding family business?
We really try to ensure everyone feels like they are a member of the family. And having been with the company for as long as I have and with Will Koch [the previous Holiday World & Splashin’ Safari president and CEO who passed away in 2010] — he was one of my very best friends — I’ve been close to the family for a number of years. So it almost felt natural when I rolled into that position. It just seemed right; it felt right. It was an honor the family asked me to take on this position and this role.

As CEO and president, how often do your ride the rides?
More often than you would probably think. Any time we have a day off, which is rare, my family and I do come here to the park quite frequently. They’ll meet me over here after hours, and we’ll go ride rides. We have reporters here who want to test something out. It’s kind of my job to make sure they get to experience it. I’ll jump on anything and everything they want to do.