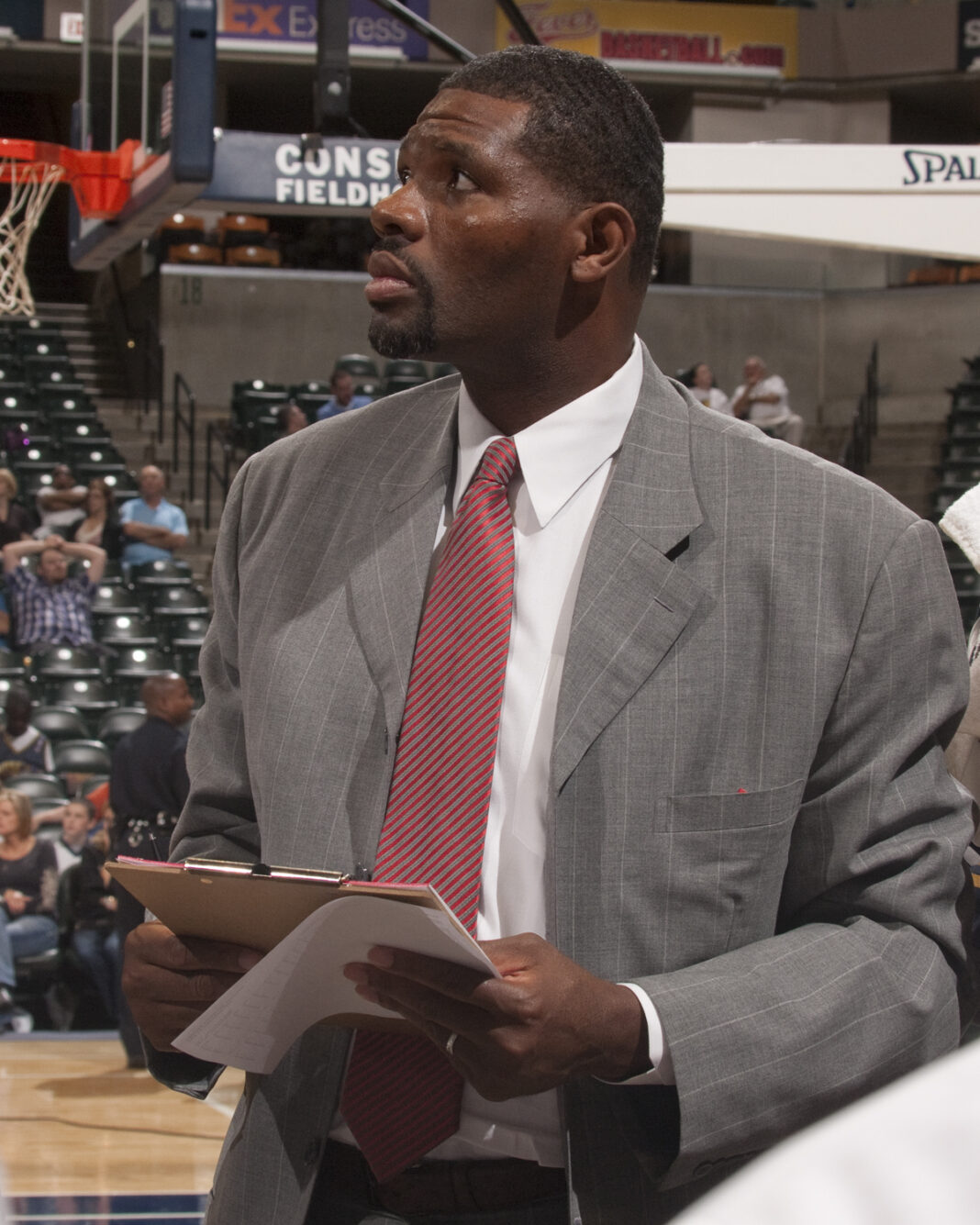 Chris Lowery has kept in touch regularly with Walter McCarty since their days attending Plaza Park Middle School together in the mid-1980s. The two Harrison High School graduates have had plenty to talk about. Lowery became an all-Missouri Valley Conference guard at Southern Illinois University and now is in his seventh season as the coach of the Salukis. McCarty played for a national-championship team at the University of Kentucky in 1996 and went on to a 10-year NBA career. But Lowery didn’t see it coming when his old friend called a little more than three years ago and said he wanted to coach. “I was a little surprised,” Lowery says. “But if he wants to do something, he does it. That’s just him.”

Current Harrison coach and athletic director Bryan Speer was McCarty’s teammate with the Warriors before they graduated in 1992. When Speer got the job at Harrison in 2007, he asked McCarty to speak to players in the Harrison feeder system, one year after his professional career had ended. “People would ask him what he was going to do.” Speer says. “He said he was going to take a break from basketball. I figured he was going to mess around with his music, but he didn’t indicate he was going to coach at all.”

Three weeks later, Speer learned McCarty had accepted an assistant coaching position at the University of Louisville, which was coached by Rick Pitino, a longtime college coach with an enviable record and McCarty’s former coach at UK. Speer was surprised, too. The more he thought about it, however, the more it made sense. “Whenever he spoke at our camp, it came easy to him,” Speer says. “He’s a great speaker, very charismatic. He was talking to young kids, fourth and fifth graders, and you could tell right then that if he wanted to coach, he could do it.”

After three years at UL, McCarty returns to the NBA this year as an assistant for the Indiana Pacers. Coach Jim O’Brien, a UK assistant during McCarty’s time there, asked him to fill an opening on his staff after last season.[pagebreak]

McCarty looks a little perplexed during an interview just outside the Pacers locker room at Conseco Fieldhouse when told that many of his longtime friends were stunned when they first heard he went into coaching. Many assumed he might pursue a career in the music industry, another passion he displayed while growing up on the East Side. He sang national anthems before games on the high school, college, and professional levels, and released a rhythm and blues CD in 2003. “That’s more of a hobby,” McCarty says. “Believe me, music is not something you want to make a career.”

By all accounts, he took care of his money from his NBA days. McCarty and former UK teammate Tony Delk have made several investments together, including in a plastics company and several Papa John’s and Dunkin’ Donuts franchise restaurants. But despite those varied interests, McCarty says his No. 1 love always has been basketball. Maybe he wasn’t thinking so much about it back in his days at Harrison, but in the NBA, coaching didn’t seem so far-fetched. “I really enjoy helping players develop,” he says. “I feel like after some of the success I’ve had, I’ve got something to contribute.”

McCARTY WAS A RAIL-THIN 6-9 during his career at Harrison (he was listed at a generous 189 pounds during his senior season), but few players in city history were more versatile. He could post up, but he could almost as easily step out and shoot a 3-pointer.

In a 1992 sectional championship game against North High School at Roberts Stadium, Harrison coach Will Wyman played McCarty all over the floor, and McCarty responded by scoring 33 points, grabbing 15 rebounds, and blocking seven shots to lead the Warriors to a 49-42 victory and the first sectional title in school history.

“Walter was an intelligent player,” says Wyman, retired from coaching but still a teacher at Harrison. “It’s not surprising with his background after high school, with his college days and pro career, that he’s picked up a lot of basketball and can really share his knowledge.

“When you’ve been there and you’ve done that, you have people’s ears. He’s a good communicator. He’s a positive person. He’s fun to be around. A lot of those characteristics really translate into being a coach and teacher.”

Lowery is two years older than McCarty, and he noticed something different about him. “He had something that drew people to him, no matter if they were white or black,” Lowery says. “He never abused that. He always treated people well, no matter who they were or where they came from.”

McCarty was named a Parade All-American and finished second in the Mr. Basketball voting following his senior year at Harrison and then it was off to UK and an NBA career that included stops with the New York Knicks, Boston Celtics (where he played under O’Brien again), Phoenix Suns, and the Los Angeles Clippers.[pagebreak]

McCARTY SPEAKS GLOWINGLY OF UL and the opportunity Pitino gave him. But he didn’t like some of the changes he saw in the college game upon his return. For instance, McCarty says he made it clear to other schools recruiting him before his senior year at Harrison that UK was clearly his No. 1 choice. His only other visits were to the University of Evansville and Purdue University, and he told then-Purdue coach Gene Keady in his office that he would go to UK if things could be worked out there — and Keady respected him for it, he says. “A lot of kids are not interested in your school, but they won’t tell you that,” McCarty says. “Now, (athletes) just want to be on all the (Internet) recruiting boards. When I was a kid, if I wasn’t going to your school, I wasn’t going to put you through all that. It was a waste of time.”

He also says he saw little of the camaraderie he experienced at UK, particularly the 1996 national championship team, which had nine future NBA players. “Tony and I we would sit in a room and would say, ‘We’re going to win a national championship, and we’re going to graduate,’” McCarty says. “We would challenge each other. We both had the same major. If one of us was struggling, the other would pick (him) up. We kept each other accountable.

Thus, McCarty decided he might be a better fit in the NBA. O’Brien, familiar with McCarty’s body of work, was keen to the idea. When O’Brien first was hired as Pacers head coach in 2007, he says he tried to convince an aging McCarty to play, but after 10 NBA seasons, McCarty retired and mentioned to O’Brien he was interested in coaching. “Walter is a great communicator. He’s really been taught the fundamentals of the game well throughout his career,” says O’Brien. “It doesn’t surprise me (that he went into coaching). He would be a very positive influence on any staff he would be on.”

O’Brien found McCarty’s resume impressive. “If you work for Rick Pitino, you get in very early and stay very late,” says O’Brien. “You’re involved in every phase of the program, individual instruction, and preparation to play against opponents. Having been an assistant of Rick’s for a long time, I don’t think you can find a better training ground for being a coach than being on Rick’s staff.”

The opportunity intrigued McCarty. “I grew up idolizing (Pacers president Larry Bird), and I was able to come in and work with him,” says McCarty, who eventually would like to become an NBA head coach and general manager. “To me, it just made a lot of sense. It’s just the challenge of moving to a different environment and different level.”

McCarty still maintains plenty of ties to his hometown. Joy Lindsay, his mother, lives in a home in Newburgh he purchased for her. He spoke at a fundraiser for the Harrison basketball team last August, and he has donated money to the school’s vocal music program through his music foundation. “I’m very happy because I have the same friends as I had back in 1988 or 1986,” he says. “We’re very close. We still talk all the time. Life may take you in different places or different routes, but to us, you enjoy life and friends and helping each other out.”

Even when all those friends could have sworn he would never end up in coaching.