The tradition of enjoying handmade products and buying locally crafted items thrives in southern indiana. From leather goods and woodwork to jewelry and goat’s milk soap, there are many ways to indulge in the hard work of local people. Delve in, get your hands dirty, and discover the makers and artisans behind these unique goods and creations. 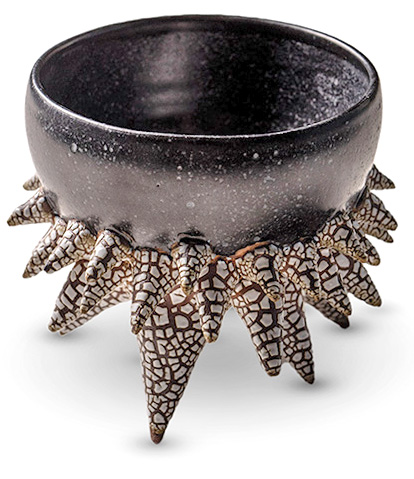 Alisa (AL) Holen has been drawn to the art world her entire life. The associate professor of ceramics at the University of Southern Indiana and recent Arts Council of Southwestern Indiana Award recipient considered other career options like graphic design or medical illustrating but was continually pulled back to ceramics. 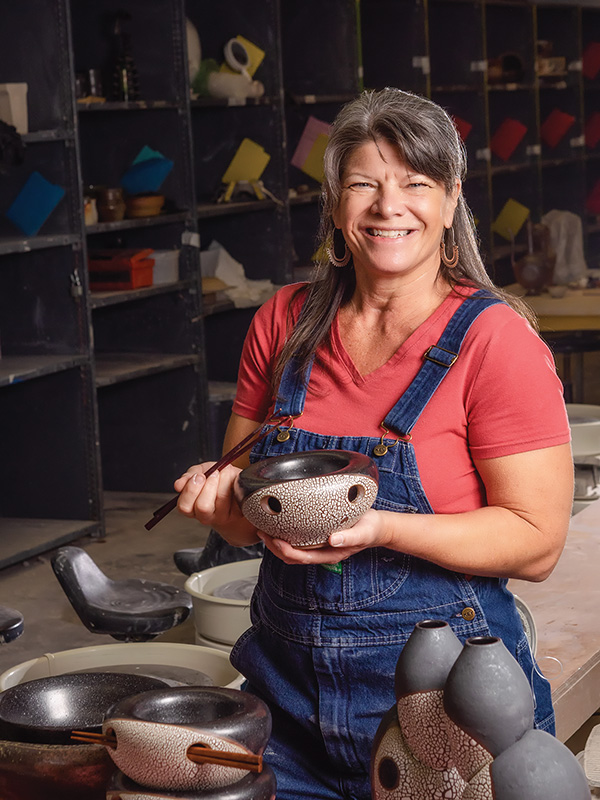 “It came down to the physicality of clay,” says Holen. “Clay is really physical. The stuff is heavy. You’re lifting heavy bags, you’re wedging the stuff, you’re putting it down on the wheel, you’re lifting it up, you’re fighting gravity. It’s physical. That’s what I think draws me to it.”

While all of Holen’s work has a strong sculptural presence, she says she always thinks about function. An avid ramen eater, Holen’s ramen bowls are double-walled to prevent the hot dish from burning the user’s hands and have chopsticks built in. Finding the solutions to those everyday problems is one of her favorite parts of the process.

“The oldest fired clay they’ve found is about 35,000 years old, and they were able to pull a finger print of what they assume is a 7-year-old kid from this piece,” says Holen. “Now I’m leaving my fingerprints on things for the next 35,000 years.”

On conceptualizing pieces:
“I’m a big believer in problem solving, which is kind of the heart of design. Like with the spiky butter dishes, clearly it’s unnecessary. If you need to eat less butter, you should just eat less butter. Can you imagine if you were dieting and everything you picked up poked your fingers? I like coming up with those kinds of abstract solutions.” 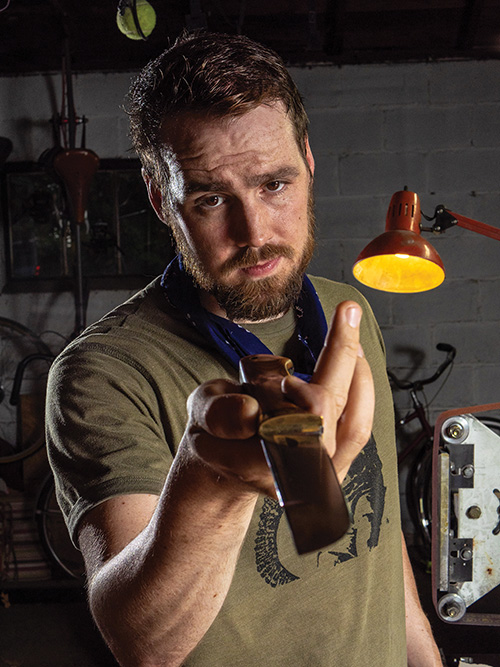 A stone hatchet was the first attempt at a knife Rick Iorio ever made.

“I was probably about 7 years old,” says the Evansville native and digital marketing strategist at Redstitch Digital.

Since then, knives have been a constant in his life, from collecting to making and now selling his personal creations. Iorio did not begin crafting hunting, camping, and kitchen knives until 2017 when he met Evansville Knife Club member Michael Smith at a local gun show. Smith invited Iorio to his shop in Newburgh, Indiana, to learn how to make blades. From there, Iorio says he was hooked.

“Knives are the oldest tools — they are integral to what make us human,” he says. “I feel like I’m carrying a torch that started at the infancy of humanity. I absolutely love it. I’ll never stop.”

Currently, Iorio produces two to three knives monthly. As he has honed his skills, he has branched into making more cutlery knives for kitchens.

On his favorite part of making knives — the handle:
“It’s fun because it is less the industrial, heavy-tools, grinding steel part — it’s more of the artistic part of knife making.” 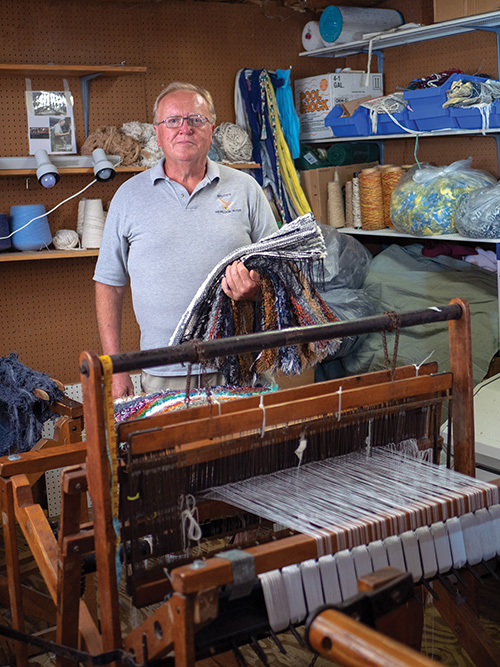 Bruce Blunk is the fifth generation of his family to work in the rug weaving business — at least that is as far back as Blunk can name, but he says it goes back even further.

The weaver has been in the business for more than 40 years. Though he now considers himself retired, he made his sole living off the business, Bruce’s Heirloom Rugs, for more than 20 years. From neckties and blue jeans to plastic bags and socks, Blunk says he can make rugs out of anything. The biggest change he has seen throughout the decades, however, is the material.

“I buy scrap material from people, but the mills are gone,” he says. “All the sock mills have gone to China. They’re leaving the country like crazy. Materials have gotten a lot more expensive.”

One part of weaving that hasn’t changed is the process itself. The Newburgh, Indiana, native weaves on two looms — one that is 90 years old and another that is 118 years old. Though the world today looks drastically different from the one in which Blunk’s great-great-grandfather weaved, he works the same craft in the same form.

“It’s really relaxing to me,” says Blunk. “I don’t consider it work. I consider it an art form.”

On using recycled materials:
“Everything I do is either recycled, up-cycled, or made out of recycled cotton. I like the idea of not filling landfills up. You can’t just use our natural resources up.” 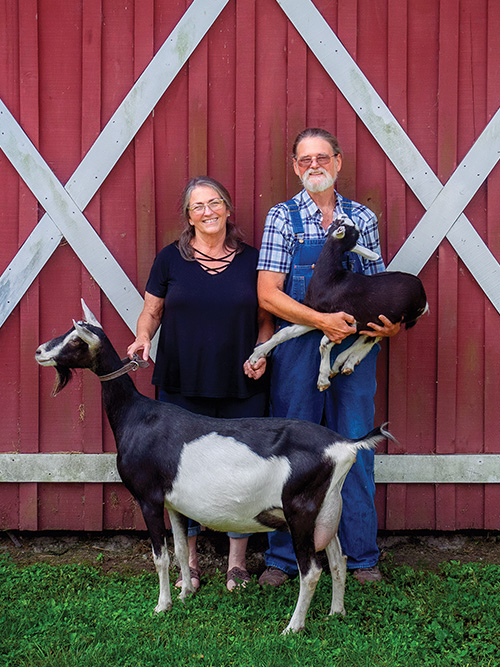 Esther and Mildred are escape artists. At two months old, the goat kids have perfected the art of slipping out of their pen to munch on a citronella plant or, better yet, the resident rose bush.

“They’re pests,” says Jerrilee LaMar, nursing faculty and the chair of the Dunigan Family School of Nursing at the University of Evansville. She then laughs, “They are so friendly.”

In a few years the two kids will become milkers on the small farm Jerrilee and her husband Scott own in Poseyville, Indiana. From that milk — and the wax she renders from their apiary — Jerrilee makes her Artisan Homestead handmade soaps, shampoo bars, lotions, deodorants, cuticle balms, insect repellents, dog shampoos, and more. It’s a venture she started around 10 years ago.

“It’s a creative outlet for me,” she says. “I enjoy the entire process. I design my own labels and packaging, and Scott milks the goats and builds the displays.”

Vitamin A is key in helping repair damaged skin tissue and maintaining healthy skin. And goat’s milk contains it in abundance. Since starting her soap making, Jerrilee has had many loyal customers who use her organic products to help their skin.

“I tinkered with the process for about six months. I finally figured out how and when to add my goat’s milk to maintain the maximum health benefits,” she says. 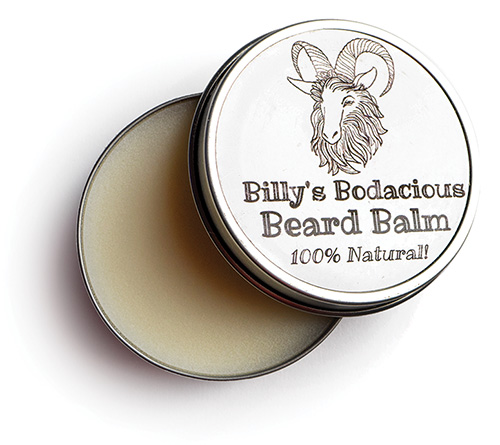 “Talking to people about how the products have helped them and their pets just warms my heart.”

On what brings her the most joy:
“It makes me feel good that I’ve been able to benefit somebody from the products that I’ve made. That’s my goal and has been a true blessing.” 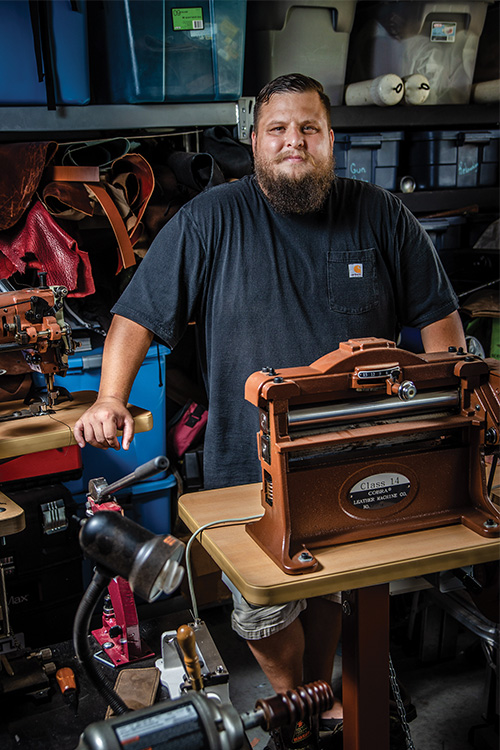 As a Boy Scout, Evansville native Christian South-Alderson
learned to do small projects with leather. He would go on to work as a social worker in Evansville before finally falling back in love with the trade.

South-Alderson began making leather gifts in 2011 and turned the venture into the brand Smith & Hide, which eventually will include metalwork projects as well. For South-Alderson, his custom leather pieces all began with an old baseball glove.

“I had a lady bring me her kid’s glove at the Franklin Street Bazaar,” he says. “She said, ‘Can you make something out of this?’ That’s kind of where the baseball wallet design came from.”

Aside from custom projects, South-Alderson also makes wallets, belts, bags, watch rolls, sheaths, and other products. While he does repurpose leather for some projects, he also uses Italian leather for the watch rolls and American-tanned leather for most other projects. Much of his work, however, he says is a trial and error process.

On being dedicated to his craft:
“Usually when I get into something, if I have a decent feeling about it, I go all out.” 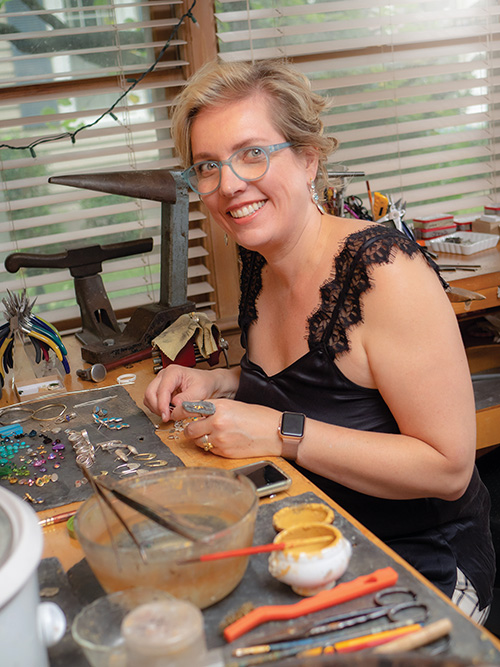 Creating jewelry pieces imitates life, and that’s what Frances Cadora adores the most about her crafting process.

“It’s such a life metaphor when you’re working because you can really f… sh.. up so quickly,” says the full-time jewelry maker. “But when you learn the most is when you screw up. It’s no big deal — you just melt it down and start over. That’s what I like about it.”

The Atlanta native and graduate of the Savannah College of Art and Design (SCAD) has made jewelry since her college days but began to sell custom pieces about 10 years ago. She does not limit herself to a specific type; she makes earrings, necklaces, bracelets, and rings.

“The love comes in the doing, not the end product,” she says. “And I like things to be difficult in my work because it challenges me. I always want to make it harder because I don’t want to be stagnant.”

Cadora completes each step of the crafting process herself, working with raw materials — including different metals and raw diamonds, among other stones — from the start. Her hands are on each piece from beginning to the end.

“I want it to look like it has my touch,” she says. “I literally love the entire process.”

On deciding to sell jewelry full time:
“I am bossy. I don’t like anybody telling me what to do, so I would rather be my own boss and kick my own ass. I’m very driven. My goal always is the next thing better than the last.” 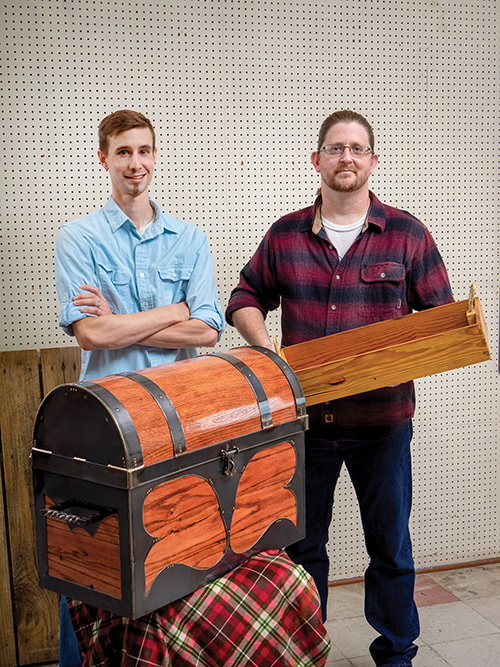 Every piece of woodwork constructed by Brandon Hutchinson and Ryan Smith of Hutch & Smith Trade Works is a one-of-a-kind piece. But that isn’t the most interesting part of their work.

“All the wood that we use is reclaimed from some local area,” says Smith, adding that the wood gives every piece the two put together a story behind it.

While Hutchinson and Smith (who have lived in Evansville most of their lives) spend most of their days building and restoring cars and trucks in their shop Hoosier Hot Rod, located in Haubstadt, Indiana, their woodworking business came about a year ago as a desire to do something more.

“We just like to make things,” says Hutchinson. “We both enjoy woodworking and we thought we would try it.”

The two craft their works whenever they can find the time — whether it’s a free moment during the day or at night after a shift at the shop. One design both take pride in is their custom chandeliers, which was the first piece they made and featured in a Dan Buck home in 2017 during the Parade of Homes. 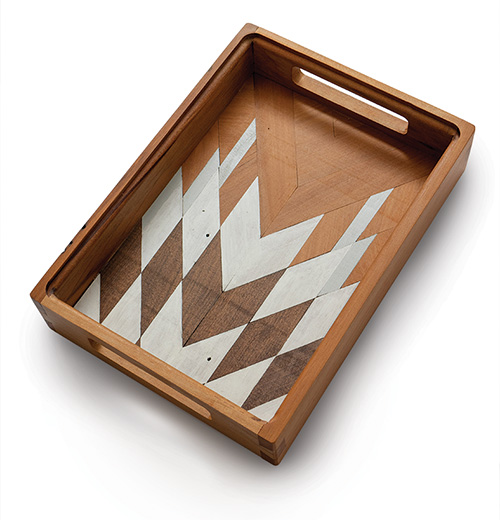 “The first one was fairly difficult. We had never built one before,” says Smith. “But we designed it and built it in five days — a day ahead of schedule.”

On what drives them:
“What else would we do? We make neat stuff and get to hang out with our families.” — Ryan Smith
“That and just seeing the end project And the reactions you get from people.” — Brandon Hutchinson 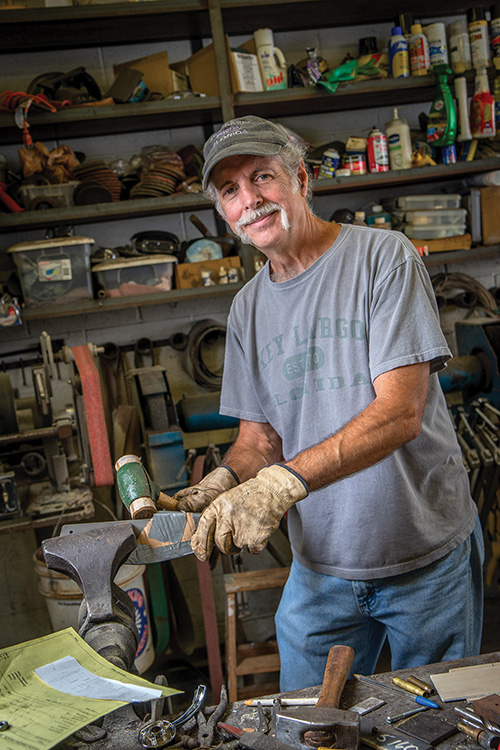 Looking around David Perkins’ home in Newburgh, Indiana, one element seems to be at every turn — metal. The welder and metalworker retired from Toyota Motor Manufacturing in 2015 and began making decorative functional items. It began with picture frames and today has expanded to projects like entire desks and a bed frame featuring turquoise stones.

When working on the bed frame, which weighs a whopping 500 pounds, Perkins’ jeweler fell through. He was left with huge amounts of raw, uncut turquoise, so he decided he would learn how to do the stonework himself. In addition to the steel and silver work, the bed frame also features 2,500 carats of polished and cut turquoise. 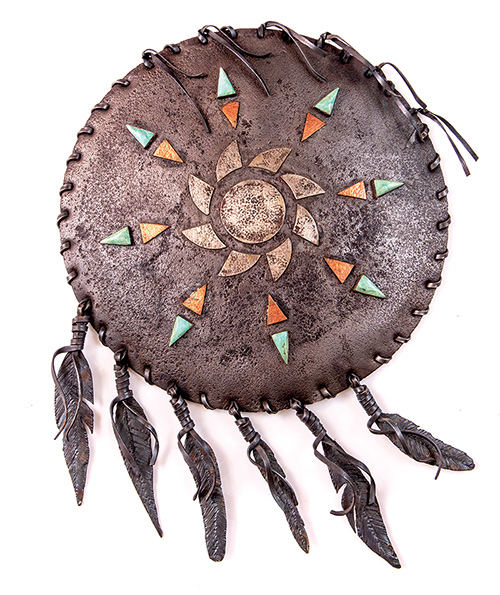 While he was working full-time at Toyota, he would go home and do more welding work on his personal projects. His co-workers thought he was crazy, but to Perkins the creative projects weren’t extra work. The southwestern-style desk took a total of almost nine months with 600 hours of actual working time invested, not including the time he spent planning and sketching.

“One section was going to be straight, then other things happen. I decide I don’t want something on there,” says Perkins. “I never know when it’s going to hit me. A lot of these ideas evolved over weeks, sometimes months.”

On being flexible:
“It’s better to ask the metal to do what you want than to tell it. It does work better that way if you don’t try to force it.”