This year I will celebrate two milestones. The first is next Tuesday, when my 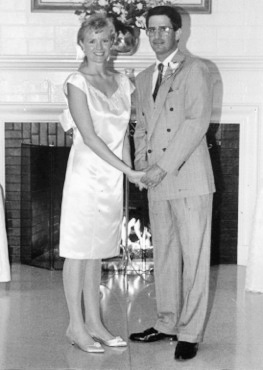 husband Todd and I celebrate 25 years of marriage. We were married at the then newly renovated Clearcrest Pines Golf Club on Evansville’s North Side. I was 24 and Todd was 26. The wedding was fairly small – my sisters were my attendants and Todd was attended by his father and cousin. My mother made my dress. A harpist played Pachelbel’s Canon in D and Handel’s Water Music, though Todd had convinced my mother Hail to the Chief would be played when he and his father walked down the aisle. It was April Fools’ Day, after all. We honeymooned at the New Harmony Inn, and then in Key West, Fla., helping to move his cousin, living in Boca Raton, Fla., along the way.

Todd and I had dated for eight years prior to our wedding. His story: We met while I was parading my dog Skippy back and forth in front of his house. He noticed me and brought out his English sheepdog, Fanny, for a walk. My story: Our mothers were friends (single school teachers socializing together) and I knew he wanted to meet me. He saw me walking in front of his mom’s house and asked if he could walk his dog, Fanny. I was pretty sure Fanny was not accustomed to long walks.

The second milestone? I’ll turn 50 in June. (I will have been married one-half of my life!) Since First Lady Michelle Obama began the parade of the last of the baby boomers turning 50 in January, I’m reminded daily I have plenty of company: Nicholas Cage, Matt Dillon, Sandra Bullock, and Rob Lowe are among those turning 50 this year. I’m not there yet, though, so I’ll save space for those words when it’s my turn in the parade.