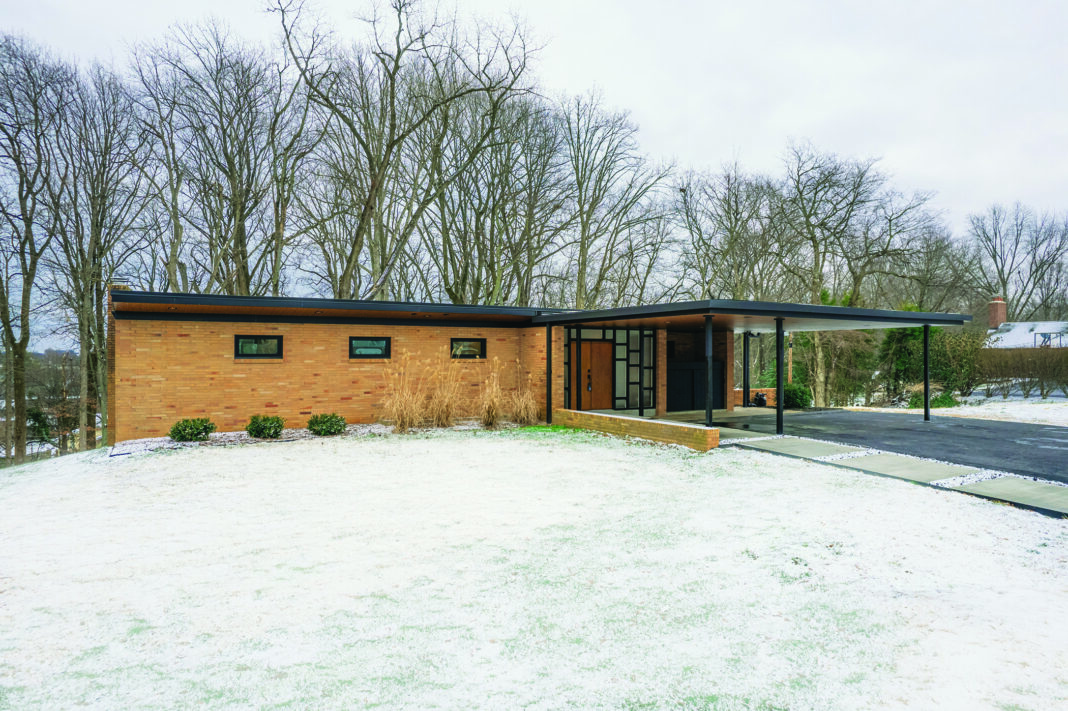 Scenic Drive’s name isn’t just for its elevated views of the East Side. The homes on this secluded street off the crest of the Lincoln Avenue hill also are quite the sight themselves. A standout among the custom builds is 440 Scenic Drive. Designed by local architect Ralph Robert Knapp in 1955, the home is one of the most authentic examples of mid-century modern architecture in the area.

Mid-century modern design is defined by its clean lines, minimalist aesthetic, angular structures, and a flowing connection between the indoors and outdoors. A mid-century decor and furniture collector, Dan Hendrickson was immediately drawn to the home built for Iley B. Browning Jr. and his wife Elizabeth Lowry Browning. Hendrickson even added the house to the Indiana Register of Historic Sites and Structures in the Brownings’ name in 2018.

“I definitely thought it was one of the better examples of this type of architecture in the city,” he says. “Elizabeth is largely responsible for the design. She was a writer and very progressive for her time. In the ‘50s, especially, she was eating organic and doing yoga. She wrote a book called ‘With Love and Elbow Grease’ about fixing up furniture.”

A second owner would buy the home in 1974 and reside there until 2017, when it was purchased by Hendrickson — an Evansville native and chief banking officer at Peoples Bank — for himself and his partner Grace Stevens, owner of Growing Through Grace psychotherapeutic services. The two-level structure’s walnut interior and cork floors were enhanced by vintage furniture and decor such as a geometric block clock and intricate shelving unit original to the home that gave it the impression of being
frozen in time.

Despite its aesthetic positives, the home wasn’t perfectly preserved. At the time Hendrickson bought the house, outdated pinks and blues covered the bathroom tiles, and the 1.3-acre lot was crowded by landscaping. The carport also had been repaired after a fallen tree caused damage.

In 2018, Hendrickson began a year-long remodel that both restored the home and added modern amenities carefully selected to blend with the existing characteristics.

“I didn’t want somebody to walk in and think, ‘Oh, they ruined it,” says Hendrickson. “I think it’s important in any restoration to respect the original design.”

With a clear vision and a collection of mid-century knowledge and furniture at the ready, Hendrickson partnered with Lamar Architecture and Design owner Jonathan Lamar and contractor David Rahman of Rahman Homes of Evansville for the remodel.

“The reason (Dan) called and wanted to do some modern work was because the bones of the house were designed by an architect who was local at the time,” says Lamar. “It wasn’t a spec home or a builder home that looked a lot like others around it. (Knapp) was someone who spent some time and designed the house, so (Dan) wanted it to have that same character with his remodel.”

Framed at 3,276 square feet, the home’s floor plan features a flipped version of a traditional layout, with the kitchen and living room downstairs and three bedrooms on the main floor. Hendrickson wanted to preserve aspects of the layout while also amplifying common spaces with an open concept rather than the classic cut-off, square layout.

They gutted the home down to the studs and took three bedrooms down to two on the main level. New plumbing, electrical, lighting, and HVAC systems were installed, and Hendrickson had the property’s hill re-sloped. He removed the foliage surrounding the home to expose its unique butterfly roof, floor-to-ceiling windows along the back exterior, and new siding. The 52-foot-long track of glass and other windows provided by Lensing Home Showroom supply ample natural lighting, along with strategically placed original skylights.

Also on the backside, two rare metal Mondrian panels — by Dutch artist Piet Mondrian whose patterns influenced design during the era — intermix with the windows. Visitors are welcomed on the property by a handmade mailbox modeled after Deus Modern’s geometric styles, a rebuilt carport, and extended concrete pads.

“I think those pieces of the project really add character and brought a tired-looking building to life,” says Lamar.

Inside, Hendrickson updated the cork flooring on both levels and utilized some of the interior walnut wall panels for new projects, including the linear electric fireplace in the basement. Marble and slate were used for the restored fireplace in the master bedroom, the shower tile, and bathroom flooring.

“The upstairs master fireplace and the natural light with the skylights are probably my favorite things that are still as they were before I remodeled,” says Hendrickson.

Removing the third bedroom to create an open walkway and sitting room, the design team created a simple, yet elegant space flowing effortlessly with the home’s entryway and show-stopping stairwell.

Suspended from the ceiling by cable rods, the floating steel stairs were custom-built by McCullough Welding and Fabrication. Painted black to match darker elements in the kitchen, the stairs are reinforced and produce a clean, airy look classic to mid-century design. The railing on the main level was also refurbished with repurposed walnut and raised to meet modern building codes.

Downstairs, the kitchen and main living room are grounded in minimalist designs with hidden uses. With the flip of a switch, a hidden projection screen unfurls in front of the fireplace. Press lightly on the smooth brown Fehrenbacher cabinets, and the garage housing a toaster and other appliances glides open. The cabinets also conceal a two-door refrigerator.

The five-range JennAir stovetop in the island matches the reflective black glass backsplash and the countertop’s waterfall edge. A brick wall offers both structural support and a staple of mid-century characteristics by running from the outdoor patio into the basement at the base of the stairwell.

The basement is noticeably missing support beams, which Hendrickson notes are hidden, built horizontally into the ceiling instead of breaking up the room vertically.

“The kitchen and downstairs living area are my favorites,” he says. “It took a long time to get here but seeing all the pieces come together over the years, you can’t help but have that good, proud feeling of a job complete.”

Once the remodel was complete, Hendrickson and Lamar immediately began drawing up plans for phase two, which included adding a garage and two-story addition to the home. But Hendrickson and Stevens had welcomed their first child during that time and decided to relocate to a home that better supported their growing family.

Purchased after just one week on the market by Evansville natives returning from California, Stuart and Michelle Dorsey, 440 Scenic Drive is a testament to the importance and benefits of historic preservation.

“I think, especially for Evansville, it’s different for most people and the aesthetic that’s prevalent here,” Hendrickson says. “I think people appreciate the uniqueness of it, and it makes an impression on them in some way.”

“If you have a unique piece of property like this, it’s pretty awesome when someone decides they want to preserve it and bring out the best in it,” adds Lamar. “It keeps pieces from the past with us, and I think that’s important. I think it gives us something to look back on, (something) we can learn from, and it’s a very important piece of history.”