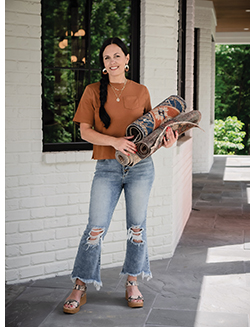 Beset by woods and tucked away among the greenery of Southern Indiana’s rolling hills, a new home’s modern exterior belies the vintage and eclectic wonder within.

Kristyn Blackard had loved her previous, more traditional home, but to meet the needs of her growing family, she and her husband opted for a change: a new build and, ultimately, their dream home.

“We actually saw Studio McGee’s show (Netflix’s “Dream Home Makeover”) when it first hit and they were launching their Windsong Project (a modern farmhouse remodel). I ran to get my husband and said, ‘This is what I want. This is the home I have been waiting for my whole life!’” Kristyn says. “And so, we put our house up on the market three days later, and we went to an architect and later the builder, Becher Brothers, to start designing a home.”

Modern and vintage styles combine inside the house, set amongst the rolling landscape north of McCutchanville.

“My husband really loves modern design — clean lines, black and white shades. Me, not so much. But I have always been drawn to farmhouse eclecticism and antiques,” she says. “Our current home is really a merge of these things, featuring a lot of modern elements but still having the farmhouse charm with the eclectic décor that I love.” 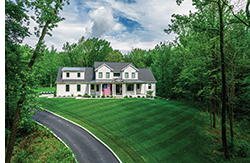 From the shaker-style Fehrenbacher cabinets to the open shelves in the kitchen, pops of farmhouse style can be found throughout the house.

Now that her kids are older, Kristyn took the leap into more modern furniture. Hand-me-down chairs and couches were dispensed with, and in came a gorgeous, deep green velvet couch from CB2 for the formal living room, along with a giant globe light fixture from Restoration Hardware. Her “chill room” in the house, the space affords Kristyn a great spot to enjoy her coffee and bask in the room’s neatly layered fusion of styles.

“Modern, clean lines can be seen in the back paneling,” says Kristyn.

“I threw in the eclectic, funky style with the couch,” she says. “The piano is in that room, too, so that brings in a more classic element. I just try to bring in a little bit from all our favorite styles. And then I tie things together with a vintage rug — that brings in the old charm.”

In fact, save for the master bedroom, each space in the home has a vintage rug. Kristyn had rugs in her home before, usually vintage items she purchased off Etsy or at estate sales. But as she was styling her new abode, finding the ideal spot for each piece, she began searching Instagram for inspiration and came across a bounty of vintage rugs. The trend prompted her to learn more about Turkish rugs and their history as she embraced the process of finding and collecting the unique pieces. 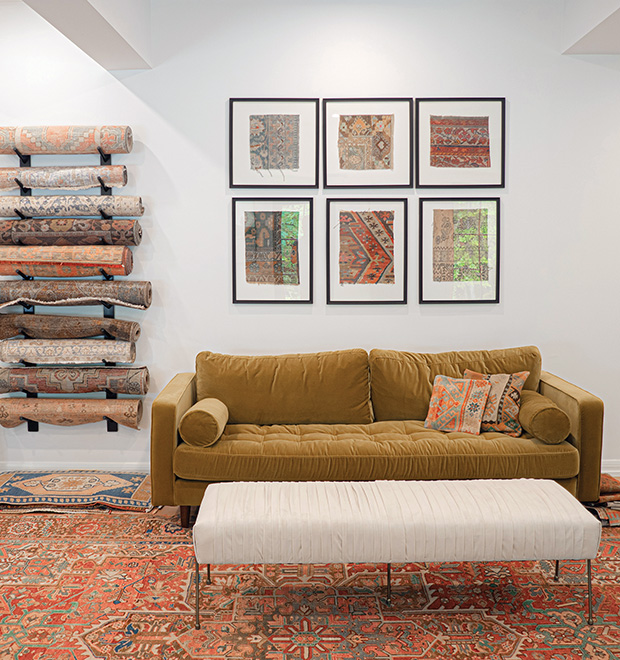 “I realized that I had found something I had never anticipated falling in love with,” she says.

Jumping into her own rug business began slow and developed organically. Kristyn loved the rugs, started collecting them and displaying the rare finds on her Instagram, and soon found herself approached by friends wanting the same look.

“So, I would help them find a rug. And then I started buying more for our home and switching them out according to the seasons,” she says. “Eventually, it became a giant pile of rugs, and my husband asks, ‘What are you going to do with all these? Maybe you should start a business.’ I launched my business, Violet Vintage Rugs, on Instagram, and it has been growing ever since.”

First a creative outlet, her business grew into a passion for helping others find the décor she admires most: vintage rugs sourced from Turkey. These are not the sort of rugs you might find at big box stores; these timeless textiles relate a narrative. “I love to point out to my customers that each of these rugs comes with a story.” she says. 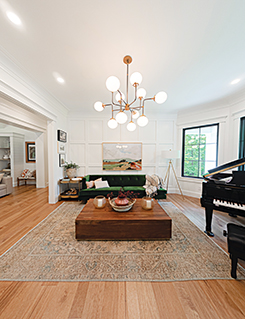 “I have sold 1,500 rugs, and I never see one that looks the same. They all have their own personality and patterns and bring so much character to a space,” says Kristyn, who names her rugs after people and places she has been. Partly to celebrate the rugs’ individuality but also to denote the features of each rug, naming them certainly makes the buying and selling of her rugs easier.

“I would send people images of hundreds of different rugs, check out the space that they are working with, and help them narrow down the right rugs for them,” she says. “It’s all about helping people through the design process, because some people actually use them as their starting point in their home’s décor.”

For one item of décor, this seems like a tall order. Yet, this is why Turkish rugs are so worth the investment, Kristyn says. They keep well.

“A lot of the rugs have lanolin woven into them, and it almost acts like a repellent for everything from barbecue to spaghetti sauce,” she says — and you can get your money back out of your rug if you decide to sell it. In fact, the rugs might go up in value. Kristyn herself has a collection of vintage Turkish rugs that are over a hundred years old — those she cannot sell or display on her home’s floor are repurposed into framed wall art.

Rugs welcome warmth and color into Kristyn’s primarily white-painted home. If she wants to change things up, she can always bring in a new rug.

“The core things that take a lot of money to redo, like countertops or windows, I try to stick with classics like clean lines, marble tops, things that will remain timeless forever. I think that allows you to take risks elsewhere with bright wallpaper or rugs,” she says.

Kristyn loves helping her customers find the picture-perfect rug, something she hopes they will admire in their homes for years to come as she does.

“I tell them, it’s a lot like finding a wedding dress. You will know when it’s the one,” she says. “So, I will keep sending you pictures like you are searching for a wedding dress. And, eventually, you find the one, and you will say, ‘This is it! That’s the one I’ve been looking for!’”