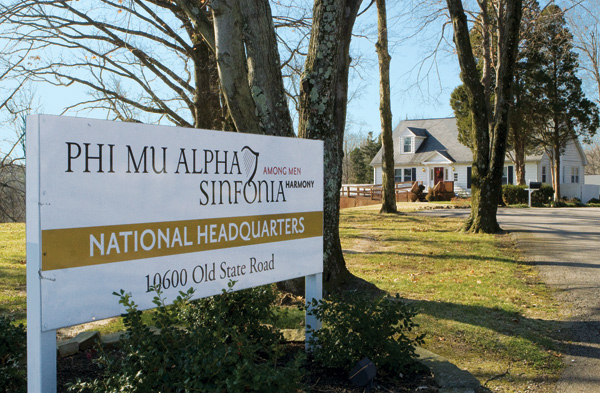 During the holidays and throughout the year, college men travel around Evansville to sing to patients at healthcare facilities and hospitals. They aren’t your average carol singers: They’re members of Phi Mu Alpha Sinfonia, the country’s oldest and largest collegiate fraternity devoted to advancing music in society and its members. Composer John Philip Sousa, jazz musician Duke Ellington, philanthropist Andrew Carnegie, tenor Luciano Pavarotti, and American Idol winner Ruben Studdard all have pledged membership to the fraternity, often called “Sinfonia” (Italian for symphony) for short.

The organization was created in 1898, when 13 male students at Boston’s New England Conservatory bonded over a shared love of music and desire to improve themselves and their art. Since then, more than 150,000 members have been initiated into the fraternity, headquartered in Evansville. For decades, Sinfonia lacked an established headquarters. In the 1960s, when it was operating on the Murray State University campus in Murray, Ky., a group of Evansvillians launched a dialogue about opening a classical music museum in the River City. The fraternity’s staff joined the discussion, says executive director Ryan Ripperton, hoping to relocate their offices to the future museum. That museum opened, but its focus changed: It now is known as the Evansville Museum of Arts, History and Science. Sinfonia already had begun to envision itself in the River City, though, and moved its headquarters to its current home, an estate dubbed “Lyrecrest,” in 1970.

Brothers in chapters around the country socialize and host music-themed events, but a major focus of the fraternity is community outreach. More than 100 years ago, the fraternity’s founder, Ossian Everett Mills, traveled to hospitals in his hometown of Boston, using his musical abilities to lift patients’ spirits. Modern Sinfonians have adopted Mills’ “music mission” in their own cities, spreading “music, flowers, and good cheer,” says Ripperton.

Sinfonia also has a stake in the local economy. Dues from the 227 fraternity chapters total $1.1 million each year. This money not only keeps the organization running; it boosts the local economy. The Evansville headquarters houses the offices of eight Sinfonia staffers, and it frequently hosts fraternity retreats and meetings. In July, Evansville will host a four-day leadership institute expected to draw more than 200 collegiate members. True to Phi Mu Alpha Sinfonia’s mission, the participants will “learn life and leadership lessons, as well as become familiar with the community surrounding the headquarters’ home,” Ripperton says.