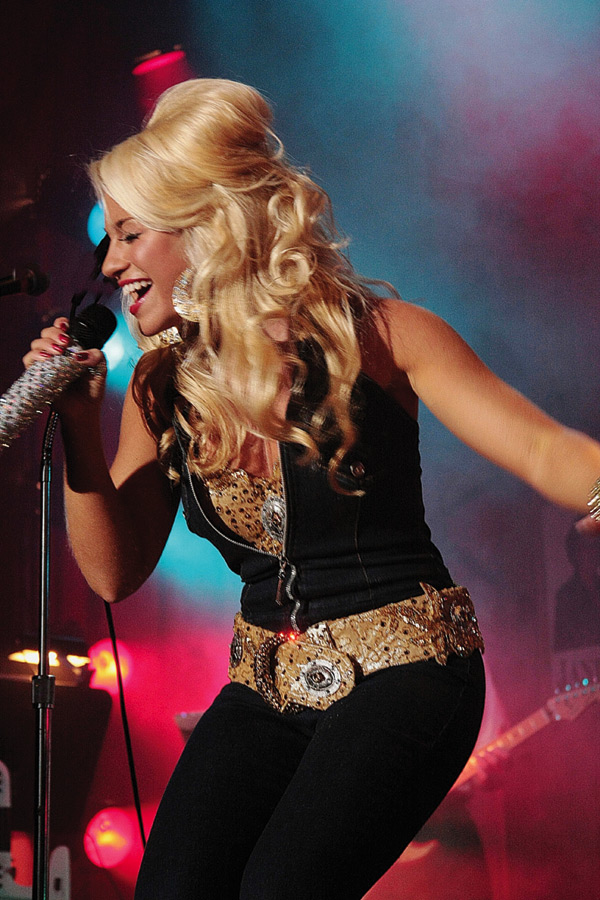 Dressed in a jean skirt, a red cowboy hat, white boots, and an American flag scarf, a 3-year-old Natasha Neely stood trembling behind the microphone at Goldie’s Opryhouse in her hometown of Owensboro, Ky. Neely’s parents had brought her to perform at an open mike night, and she remembers being overwhelmed by stage fright. Still, her rendition of “God Bless America” won over the audience — and Goldie Payne, the longtime owner of the entertainment venue that closed in 2008.

Neely became a regular at Goldie’s (now leased to the Theatre Workshop of Owensboro) and credits the owner and cast — her “second family,” she says — with nurturing her love for traditional country music. That passion inspired a move to Nashville, Tenn., to study music business at Belmont University and pursue her dream of becoming a country star.

Neely, now 23, has performed at Dollywood and the Country Tonite Theatre in Pigeon Forge, Tenn., opened for country legend George Jones, and shared the stage with Louise Mandrell during the singer’s Christmas show at Nashville’s Gaylord Opryland Hotel. She graduated from Belmont last year, and before returning to Music City, she’ll spend the summer in Hershey, Pa., performing in a Matt Davenport-produced country show at Hersheypark. (Davenport’s Tennessee-based company also produces shows at Holiday World in Santa Claus, Ind.)

Do you remember your first performance?
I really don’t remember it. I know that I was terrified when I got up there for the first time. And I had Goldie up there with big hair, fake eyelashes, really super loud. My mom had to get up on stage with me and get me started. I think I was OK after that first initial fear of being up there with Goldie and those bright lights. I definitely got over that fear.

Speaking of big-haired blondes, you spent a summer working at Dollywood in 2007. What was that like?
Walking into Dollywood every day was so surreal. I never took it for granted. Walking through the park on the way to the venue where I performed, I thought, “Do I really work here? Do I really work for Dolly?”

Do you know how much you resemble her?
People have told me that. And I’m not going to lie: I like that because she’s somebody I really look up to as a person.

You’ve said you enjoy covering other songwriters’ material. Do you have a favorite song?
There is one song that I have performed that seems to have had a big influence on people: Rascal Flatts’  “God Bless the Broken Road.” I sang it at Owensboro Christian Church one year, and it was a recognizable country song that really was not expected to be heard at church. The preacher geared his message around the song, and I got so many comments on that song, even years after. I guess the song along with the preacher’s message made a big impact on people. That song’s always had a special meaning to me because of that.

You travel often, and your schedule is busy. Where do you find inspiration?
My passion is country, and just music in general keeps me going and is the driving force behind why I do what I do. Country music tells stories and can really affect people. To be able to relay a message through a song is another driving force that I have: just being able to reach people, being an example, and sharing a message.

To learn more about Natasha Neely or purchase her two EPs (including last year’s What I Was Waiting For), visit www.natashaneely.com or www.myspace.com/natashaneely.