I’ve been thinking about Evansville’s neighborhoods. Twice a week I now make a morning driving to the University of Southern Indiana, joining the nearly 50,000 vehicles traveling west on the Lloyd Expressway. Despite the construction of the cloverleaf interchange at U.S. Highway 41 and the resulting traffic congestion, it’s still easy to sail over the city at a pretty good clip barely glancing down at the rooftops below the expressway. And it’s the neighborhoods these rooftops make up that I’ve been thinking about.

Independence, Lamasco, St. Anthony, Jacobsville — the neighborhoods cut by the swath of the expressway have names — or at least they did. Now, the Evansville Department of Metropolitan Development, with help from Matt Wagner Design, has compiled a map showing all the known historic and contemporary neighborhoods within the city limits. The prints are $25 and proceeds benefit the Arts Council of Southwestern Indiana and United Neighborhoods; they can be purchased at the Arts Council offices at 318 Main St. 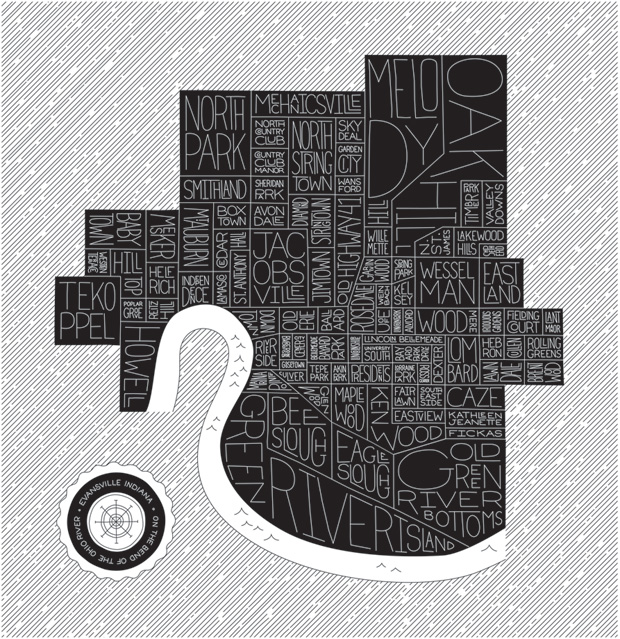 The 1957 Evansville phone book I wrote about a few blog entries ago also has prompted me to think about our city’s neighborhoods. The shotgun house my father grew up in on W. Florida Street, as listed in ’57 phone book, still stands in Lamasco, not far from Pigeon Creek or the Ohio River; I can picture my father as a young boy exploring the area. Today, there’s not much to bring visitors to this now industrialized neighborhood. But the house remains — one of the tidier homes on the block, with a white picket fence and, conveniently for the neighbors, a Pepsi machine in the front yard. The folks living in these homes not far from the shadows of the Lloyd Expressway are indeed neighbors, and their neighborhoods make up the fabric of the city.