“Then they traded Kay for Bunny.”

For Evansville residents, this is how the story of Mesker Park Zoo’s first elephant Kay ends. While most have been content with the explanation of the transfer, something about the vague story did not sit well with Erin Gibson.

“I’ve always been like, ‘Well, what happened to Kay?’” says the Posey County native.

Then Gibson, a journalism professor at the University of Southern Indiana, heard a report on the elephant she says described a horrific event that happened to Kay after she was sold from Mesker Park. It was something that caught Gibson’s attention and wouldn’t let go.

In 1929, Kay arrived in Evansville and was celebrated with much fanfare. In 1954, she gained notoriety for fatally injuring her handler and then-director of the zoo Bob McGraw. Before McGraw died from his injuries six days after the incident, he begged the Parks Board and city not to destroy Kay.

“Here was this man who everyone loved and respected, and I couldn’t believe he would have asked them not to do anything and they still would have done what I heard happened to her (euthanasia),” says Gibson. “I knew it was possible elephants had been killed for what they had done. I just couldn’t believe this one had.”

And so began a four-year-long endeavor by Gibson to find the truth of what happened to Kay the elephant. The work has culminated into a documentary film, “Two Elephants,” which will debut at a special public screening at the Old National Public Theatre at WNIN May 18 and 19.

“I was supposed to tell this story,” Gibson says of the experience. “And for some reason Kay is just this inspiration for me. So I did it and I would do it all over again.”

What happened to Kay after she was sold from Mesker?

That’s kind of the mystery I solve in the film, so I won’t reveal much about it. I can tell you I know what happened to her. I don’t know exactly all the details surrounding it, but I know where she died.

It felt really good. It’s hard to even put into words. Kay represents for me the larger story about elephants in captivity in the last century. We now know what elephant memories are; we know how strong those memories are. We know what their intelligence is; we know what their emotions are. That tells a big story now, where at the time (Kay came to Evansville), they didn’t know. They had no idea what they were doing.

The film also covers the story of Bunny, Mesker’s second elephant. How did her story come into play?

Bunny’s ending, everyone is familiar with; Bunny leaving here and going to The Elephant Sanctuary in Hohenwald, Tennessee. She lived up to her gentle name. 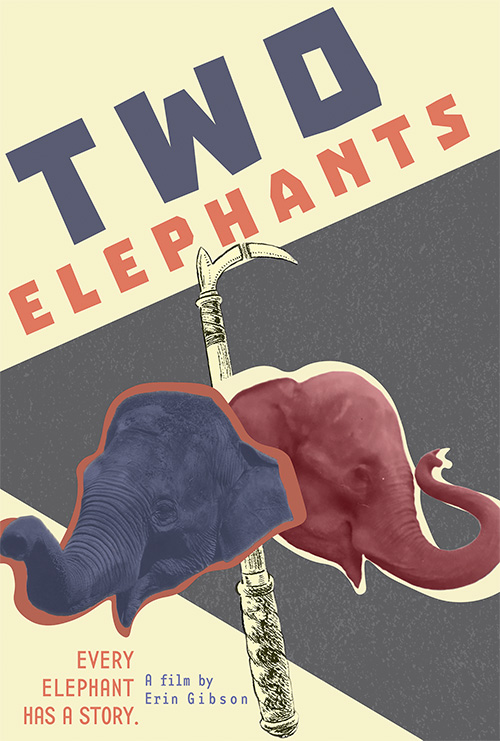 Other than telling the stories of Kay and Bunny, did you have any other goals for this film?

One of the things was I needed to solve the mystery of what happened to Kay, and I needed Evansville to acknowledge that. I needed it to be somewhere that it could be easily found, because it was not easy for me. And now it will be.

There was a surprise that happened also — I ended up solving a mystery for another community (in Michigan), where Kay died.

What about your process did you enjoy the most?

Not the editing, let me say that. I did have help — I hired someone who was a student at the time, David Arthur. He graduated and continued on with me.

But what I enjoyed? I had some amazing experiences sitting in libraries and coffee shops, and sometimes at the bar at Tin Man. The archival research was both the most exhilarating and sometimes the most mundane parts. I got to spend a lot of time with myself just reading headlines, trying to figure the story out.

I loved spending my summers researching. I would go to the West Branch Library and sit at those old wooden tables, look out those big windows that overlook Franklin Street.

What kind of approach did you take in the film?

I did this film without a narrator. So that was a challenge — I’m a big fan of films that are told through the voices of the people who lived it. That’s what I wanted in a documentary.

But I was portraying events from 1929 through the 1950s, 1960s, and I have no one from that time to speak. Karl Kae Knecht is gone, Bob McGraw is gone, Kay can’t speak for herself. I had to rely on newspapers to tell me things.

It was really neat to be able to use these words that were written so many years ago. They were direct words, slightly modified to avoid any repetition. That was a lot of fun. I didn’t know how much fun I was going to have writing the script.

Are you looking to distribute the film?

I’m not looking for distribution. I just want to tell this story, and it’s been incredible.

I’ve also entered it into some film festivals. I don’t know what’s going to happen. I hear they are very hard to break through, but I also knew I couldn’t have gone through all of this without giving it a chance.

I’m just really happy to finally be sharing it.