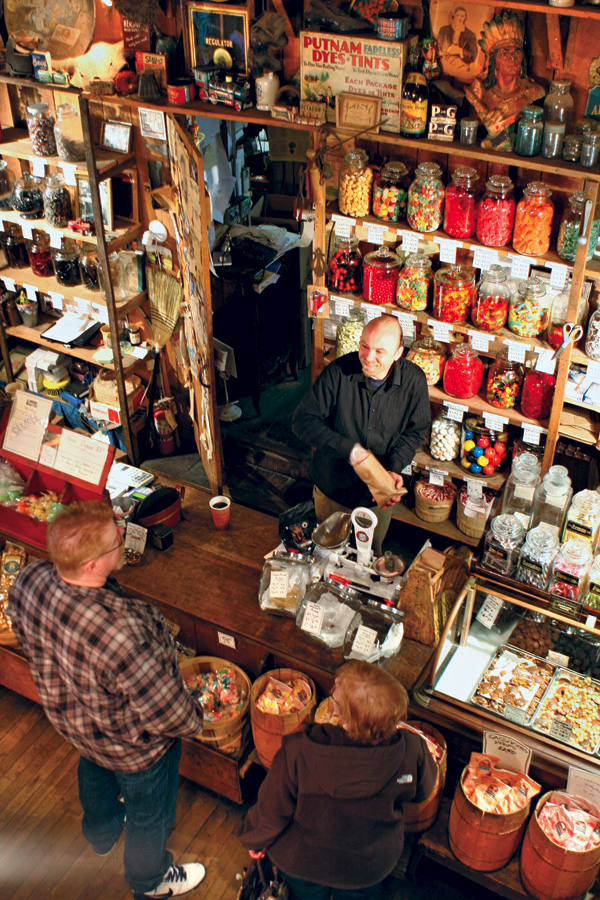 Old wooden wagon wheels and stacks of hay stand sentry at the Newburgh Country Store. A rustic wooden sign proclaims, “This here building was bilt in 1863.” [sic] Inside, lamps cast a warm glow on vintage posters and dried flowers hanging from the eaves. Wind chimes compose a melody. A wall lined with jars of sweets such as lemon puffs and butter mints hearkens back to confectionery shops. The store’s brass-toned cash register is around 100 years old.

“Most businesses don’t have that kind of history,” says Nathan Kluger, the managing family member for the country store. His grandfather, Kurt Kluger, purchased an old Catholic church in 1963 for the business, and Nathan is the third generation of his family to manage the Newburgh Country Store. Before taking the helm, he worked in the store and grew familiar with the offerings. He taught English in China and later became a mortgage broker in Indianapolis. In late 2007, Nathan returned to Newburgh to head the store’s operations.

“We put new life into the business,” Nathan says. One of the updates he engineered is the expansion of the Newburgh Country Store Herb Festival and Plant Sale. The original garden mart began in the Newburgh Country Store parking lot in April 1982 as the brainchild of Kurt and his wife, Marilyn. The event offered thousands of herbs, perennials, and annuals to the public for two spring months.

Now, Nathan offers the event (running April 1-May 31) at six locations in the Tri-State, including the flagship store. “We’re really trying to have a strong representation of local and regional items,” Nathan says. And why shouldn’t the event feel familiar? “The Newburgh Country Store is a family business,” Nathan says. “I feel tremendously blessed to be a part of that.”