A life in student affairs seemed always to be the path Dr. Jennifer Hammat would follow — after all she spent the first year and a half of her life in the Zeta Beta Tau fraternity house on the campus of Marshall University, Huntington, West Virginia.

“I didn’t know everyone else didn’t have the kind of conversations around the dinner tables that we did,” she says. “I heard about budget meetings, the board of regents, and all the kinds of university slang. That was my life.”

Recently hired on as the University of Southern Indiana’s new dean of students, Hammat has a long, successful career of connecting with students and addressing the issues that college kids face. She grew up in Murray, Kentucky, and on the campus of Murray State University — her father was a hall director and her mother worked in student affairs.

“We lived on campus in a residence hall,” Hammat says. “Trick or treating was a blast, and so were Girl Scout cookie sales. Those two things were definite perks of living on campus as a kid.” 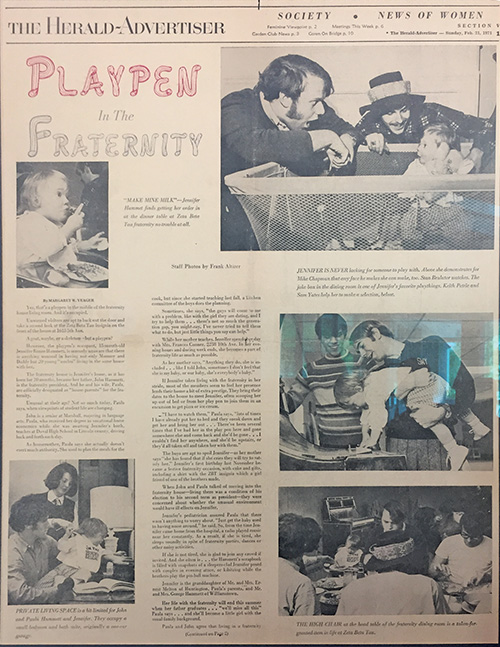 After high school, she decided to stay in Murray, attending the university her parents worked at to pursue a degree in organizational communication. But not many organizations were hiring 22-year-old college graduates to assess the strengths and weaknesses of their businesses.

So she followed in the footsteps of her parents, landing a job at the University of North Florida, Jacksonville, Florida, as a hall coordinator, supervising resident assistants as she continued her secondary education.

“I think I always was going to end up in student affairs or something along those lines,” says Hammat. “I was studying physical therapy and enjoying the classes, but not nearly as much as I was enjoying my staff and helping with residents. I very quickly assessed that maybe I accidentally found what I wanted to do.”

Her time at North Florida came to an end in 1998 when she accepted an opportunity at Texas Tech University, Lubbock, Texas, as a hall director. Her career path expanded in Texas over the following years — after obtaining her master’s degree in higher education administration while at TTU, she went on to finish the doctorate program in the same field and moved from working in housing to student conduct at the university. In 2006, University of Texas Austin would open a door with the position of assistant vice president of student affairs, which Hammat said came with several different responsibilities, including managing the student media.

“I had to do some challenging organizing and restructuring there, but I learned so much about student media,” she says. Then she laughs, “I realized there are a lot of things I can control, and maybe student journalists are not one of them.” 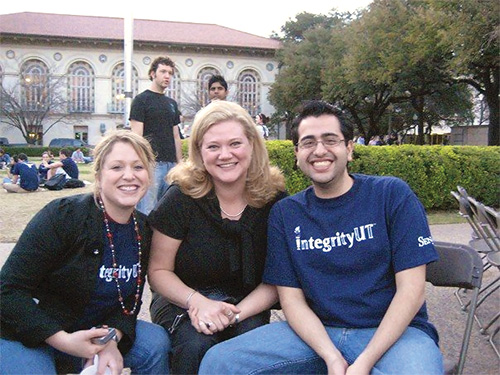 UT Austin also was the campus where Hammat took on her first role involving Title IX compliance (passed in 1972 as part of the Education Amendments Act, Title IX deals specifically with the prevention of discrimination based on sex in any education program in the U.S.). Seven years after her start in Austin, university president Bill Powers elevated her position to that of associate vice president, working in the university compliance office. Her career would move to consulting work for a time before a position as Title IX coordinator at George Mason University, Fairfax, Virginia, brought her close to the nation’s capital in 2015.

During the time between 2011 and 2017, Title IX was at the forefront of the minds of universities and college campuses — in 2011, the Office for Civil Rights (OCR) issued a “Dear Colleague” letter, which adjusted how colleges receiving federal funding must conduct investigations into student-on-student sexual assault under Title IX. Over the following six years, more documents would be released from the OCR on further guidance for universities. (In 2017, Betsy DeVos, head of the Department of Education, withdrew all guidance and the Dear Colleague letter related to sexual violence and issues on campus sexual misconduct issued in 2011.)

“Title IX has been around for decades, but I think the shift with it really came in the early 2000s,” explains Hammat. “I knew when the president of the University of Texas Austin asked me to get into it, we knew we wanted to do better.”

She explains the Dear Colleague letter in 2011 was the Department of Education stepping up to hold schools accountable for handling sexual violence and misconduct on campus.

“The Title IX work has been really important to me, and it certainly is a compliance function,” says Hammat. “Part of it was we have to think about this from a strategic perspective — what do we need to do to get the student resources, make sure they know their rights and options, and make sure they aren’t forced into things they don’t want to do. Then asking them what they need — how can we help them.”

And while she was happy in her position and with her work in Title IX at George Mason, the pull of student affairs still tugged at Hammat.

“I wasn’t looking for a new position. I happened to see the (dean of students) job open at USI and thought I would just have to put my hat in the ring for it,” she says.

“She brings in a wealth of knowledge from her past experiences in higher education,” says Dr. Marcia Kiessling, vice president for student affairs at USI. “She has a solid background in policy development and process implementation, understands the challenges and opportunities of higher education, and is dedicated to providing support.” 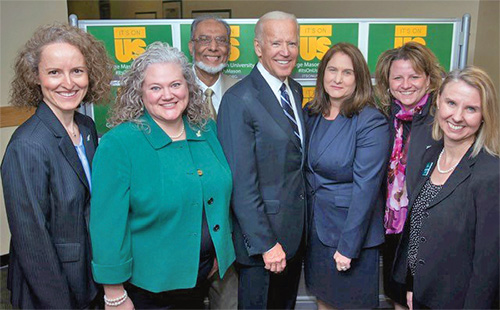 ▲ One of the big events Hammat was a part of at George Mason University was a visit from former Vice President Joe Biden, who discussed affirmative consent and the university’s “It’s On Us” initiative. “Students just really ate that up,” she says of the visit. “We had all kinds of public figures on campus because we were close to the capital, which was really great.”

“I visited [USI] and obviously fell in love with the beauty of the campus,” adds Hammat. “But I also really hadn’t heard students talk about a campus like they did here … and that was really cool.”

Her official first day in the position was May 6, and within her first two weeks, Hammat hit the ground running, even though most students and faculty were leaving for the summer.

“I’ve already had around 45 meetings in my first two weeks,” she says brightly. “And in the first 60 days, I know I’ll be drinking a lot of coffee as I continue to ask people if they have a moment to grab a cup and chat.”

It’s difficult to escape Hammat’s enthusiasm for her new position and for the students of the school. As dean of students for USI, her primary duties revolve around engaging students — not just in programs and services offered on campus but also as a leader for the dean of students office, counseling center, and the University Health Center; chairing the CARE Team and Eagle Experience Team; serving as an advocate for students; and acting as the primary advisor for the Student Government Association.

She hopes in her new position to connect USI alumni — especially those still living in the area — back to campus, to show them what the future holds for the school and how far it has come over the years. Keeping connected with the families of students and the community as well are high priority items on her list. 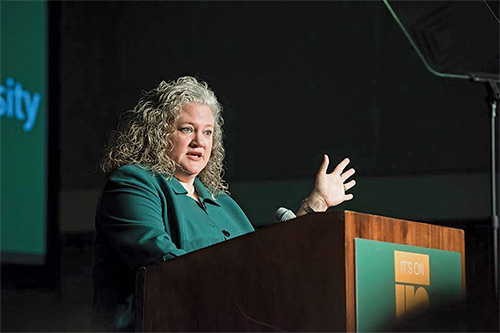 “You have to be able to reach out, touch, and connect with everyone,” says Hammat. “You really can’t say no your first year — it’s about getting out, getting to know folks, letting them know who you are. But you also want this to be an office widely known for support.”

“It’s clear she has a passion for working with students,” says Kiessling. “We feel confident she will continue to provide that excellent support and service to USI students and the university community.”

Being a part of USI and Evansville is exciting for Hammat — hopeless when it comes to directions and geography, she says she was surprised and elated at how easily she can get around Evansville. But beyond navigation, being at USI feels like coming home for the woman who grew up in southern Kentucky, just a few hours from Evansville.

“There are those tipping point moments, you know, and boy does it feel like Evansville is at a tipping point. It feels like it’s right there,” she says.

Hammat plans to immerse herself into that movement, helping her new home and campus push forward.

“I have a real pay-it-forward philosophy. I think for me, I happen to be in a vocation where we shape lives and make sure on the worst day, someone says to a student tomorrow is going to be better,” she says. “I had people do that for me so I want to make sure we continue to do that.”