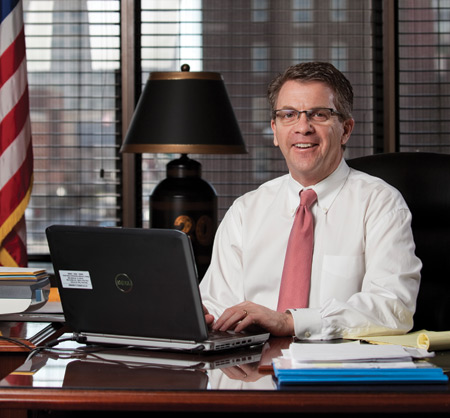 Timing is everything — that’s what Evansville’s new mayor, Lloyd Winnecke, believes. It was only within the last couple of years that he started to think about running for mayor. He had a solid job for more than 13 years as the marketing director and senior vice president at Fifth Third Bank, served on the County Council for nine years, and was a county commissioner for three. “When the political landscape evolved,” he says, “it just looked like the timing would be good.” It also didn’t hurt that community members in the not-for-profit world, the business sector, and in the public safety arena were encouraging him to run.

“When you put all of that together — timing, encouragement, and personal and family reflection — we just decided it was a good time to try it,” he says, referring to himself and wife, Carol McClintock.

Prior to officially taking office on Jan. 1, 2012, Mayor Winnecke already had initiated his mayoral duties. Three days after his victory against Democrat Rick Davis in the November election, Winnecke named a 12-member transition committee to help him sift through nearly 300 resumes for city administration jobs, another 150 for board or commission positions, and interview, extensively, candidates for his administration.

Job creation was at the forefront of his election campaign and Mayor Winnecke plans to keep it his number one priority in office. “We have an entire jobs plan,” he says. “We’ll use that as our blueprint.” For the University of Evansville graduate, staying on track with other major issues also is important in moving the city forward, including in-depth plans for eliminating the manufacture and use of methamphetamine and reducing litter in the community. Here, Mayor Winnecke explains a few of his strategies.

Listen
By hearing the community, Winnecke will be able to better serve the individuals he represents. In December, for example, he met with a woman who had concerns about the bus system, METS (Metropolitan Evansville Transit System), and METS Mobility. “I’m meeting with folks who have very specific concerns and ideas about what goes on with the city."

Stay Visible
Before taking office, Winnecke and his wife felt it was important to remain as visible as possible in the community. One way to do that was through volunteer work with not-for-profit organizations where they wrapped Christmas presents and rang bells for the Salvation Army. “We even coordinated the recruitment of new volunteers for bell ringers,” he says. “It’s amazing how many people would say yes to an hour of bell ringing if the mayor-elect or his wife calls and asks them to. That’s a good thing.”

Now in office, Winnecke says he plans to stay involved. “I think it’s really important,” he continues. “Evansville has a really great not-for-profit community, but every organization needs greater visibility. If the mayor or members of his administration can be a part of any of those not-for-profit organizations, I think it lends them more credibility.”

Take Care of Business
One of the ties that holds a city together is business. “Our primary objective is to create an environment that is really conducive to business investment,” says Winnecke. “We know we need to be out in front of businesses, talking to them, understanding where they are in their business cycles, and making sure they understand to what degree the city can be a resource in their business growth.” For him, it’s important for workers to have more than just a face for the community. “I think that employees of the city want to know their mayor,” he says. “And know that I care about what they do.”