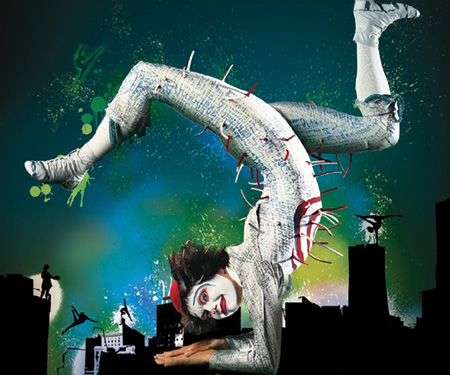 In 1980s Quebec, the French-speaking region of Canada, a pair of street performers decided to take their skills from the pavement to the stage, creating entertainment company Cirque du Soleil. With a mix of circus-esque and street acts, this international traveling group of performers consistently pushes the limits of the human body in each of its 21 acrobatic shows. Since its inception, Cirque has entertained millions of spectators, and currently employs nearly 5,000 performers and crewmembers. This April, Cirque Du Soleil comes to Evansville with its show Quidam.

Since 1996, this tale of a young girl, Zoe, who creates an imaginary world to escape the boredom she faces in reality, has traveled the globe as a big-top show in major cities. To bring the world of Quidam to smaller towns, the show downsized to an arena format in 2010. The 52 performing acrobats, musicians, and singers, 22 full-time technicians, 20 support staff, six caterers, and three truck drivers — from 23 different countries — will arrive in Evansville a few days prior to performance days, April 26-29 at the Ford Center. “It’s a pretty cool experience,” says Jessica Leboeuf, Quidam’s publicist. “Quidam’s storyline is left open for your interpretation. You can just be entertained, or go deeper.”

In Latin, quidam means “anonymous passerby,” which relates to the show’s premise. As young Zoe, who lives an ordinary life, journeys her way through her dreams, she encounters characters who show her how to live freely and find happiness. Throughout the show, Leboeuf says the performers represent the everyday man. “They could be anyone,” she says. “And then they show you something amazing.”