Sampling a bottle of Steak Dance seasoning for quality control, Kim Grauer puts the spice directly on his finger. He tastes salt, sugar, black pepper, a combination of other spices, and — the key ingredient — ground coffee.

“When you throw a steak on a grill after you season it with Steak Dance, (the coffee) puts a sear on the outer part of that steak, which seals in all the juice and its flavor,” says Grauer, who created the original Steak Dance recipe in 2003.

He couldn’t find a blend to satisfy his taste buds until chef Grady Spears on the Food Network inspired him to experiment with coffee grounds. Grauer perfected his recipe, sending out samples and surveys to everyone he knew. From 2004 to 2006, he placed in second, first, and third place, respectively, in the National Fiery Foods & Barbecue Show Scovie Awards. He also placed third in a 2004 Chili Pepper magazine contest. Grauer went on to establish parent company Grauer Family Foods and began producing Steak Dance for retail sales through his website and the now-closed Wild Oats Markets in 2007.

Coffee isn’t a typical seasoning component, but it’s included in all of Grauer’s seasoning flavors, except for his dessert seasoning, Cookie Dance. Now, more than a dozen “dances” — from dish-centric flavors like Chicken Dance, Pizza Dance, and Fish Dance, to seasonings like Hickory Smoked, Brown Sugar Bourbon, and Honey Pecan — along with gourmet pickles and candied Jalapenos are manufactured by McCarthy Spice in St. Louis and distributed by Grauer to Bargetown Market in Downtown Evansville and regional Schnucks and IGA supermarkets. 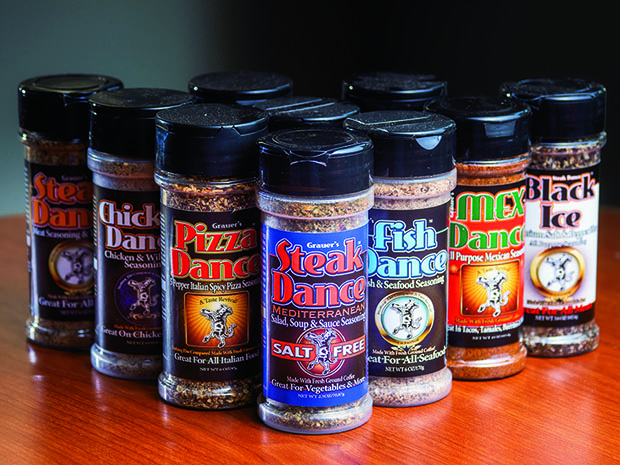 “Anybody can make a barbecue sauce or seasoning,” he says. “It’s just a matter of how far you’d want to take it.”

Online seasoning orders starting at $4.99 are shipped directly to the consumer and include a swag bag with a branded bracelet, ink pen, coaster, magnet, and slop towel. Each item is adorned with the company’s signature name and logo: a cartoonish, dancing cow — all created by Grauer, a retired graphic designer.

“It’s one of those weird moments when I had to come up with a name for the product, and it just popped in my head,” he says. “It’s been really rewarding. I love doing it probably as much as anything.”