On Top of the World

But when you’re loading onto a coaster or floating down the Bahari River, how often do you notice the behind-the-scenes operations? Have you ever wanted to see the magic for yourself? If so, you’re in luck. Holiday World has created the Keys to the World tour series for guests to enjoy a VIP experience at the park. The series has two tour choices: the EarlyBird, in which guests get a behind-the-scenes look at two of the park’s popular roller coasters, and the Guide to Ride, where guests get four hours of frontline access throughout Holiday World and to water coasters in Splashin’ Safari.

As novice roller coaster enthusiasts, Maxwell Tucker and I decided to try the EarlyBird Tour, which is available to guests on Thursday, Saturday, and Sunday mornings starting in June. We made the peaceful hour-long drive from Evansville to Santa Claus and were greeted by three smiling faces: Lori Gogel, director of revenue administration; Josh Moore, communications coordinator; and Kaitlyn Sharp, elite in rentals and services at the park. 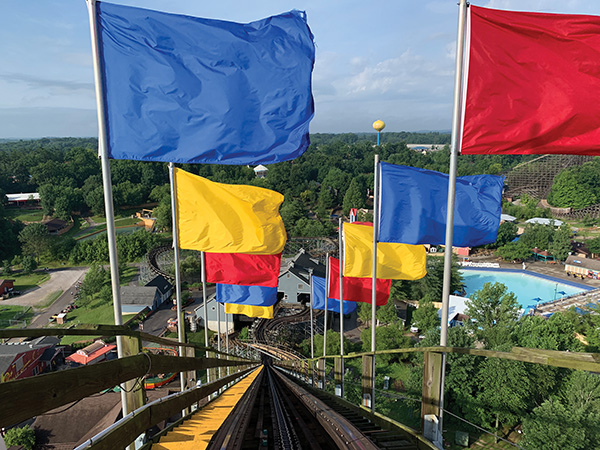 The first stop of the tour (which begins before the park opens to visitors) was The Voyage — the 173-foot-tall lift hill seemed impossible to climb from the ground. We were greeted by Lori Cotton, director of attractions, and our group of six began the climb on The Voyage’s lift hill, the highest point in Holiday World. From the top you can see everything in the park. I still don’t know if it was the view or the 210 steps that took my breath away. After a careful descent, we then headed toward the Thunderbird for the second portion of our tour.

There, we met with Anthony VanCamp, manager of Holiday World’s north shop maintenance, and got to see a Thunderbird vehicle up close. VanCamp showed us the two generators (called flywheels) that power the Thunderbird and the computer mechanics behind the coaster’s launch.

We finished our tour with our own private ride of the Thunderbird. Some of the best perks included in the tour came after it concluded at 10 a.m. — the managers arranged for us to have three front-of-the-line passes, $15 in HoliCash, a commemorative lanyard, and vouchers for an on-ride photo.

The Keys to the World tour series is a once-in-a-lifetime experience, but don’t just take my word for it. Tours are available now until early August and can be booked online.