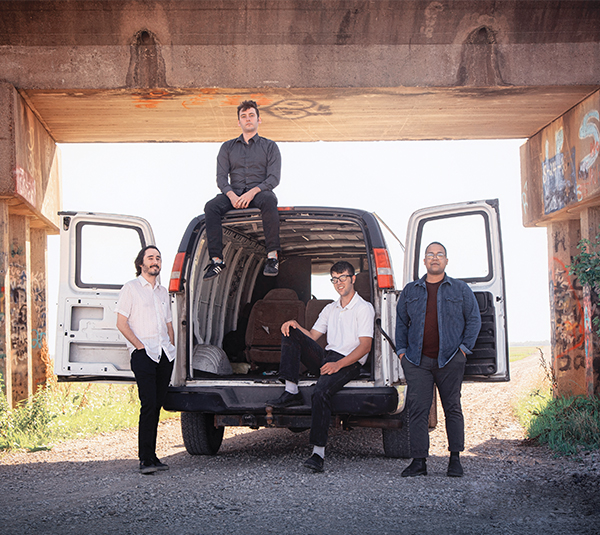 There is no other combination of people that could have led to the formation of Thunder Dreamer — at least that’s how lead singer and guitarist Steven Hamilton sees it. As teenagers growing up and playing music in Evansville, drummer Corey Greenfield, bassist Alex Wallwork, keyboardist Zach Zint, and Hamilton never imagined they would grow up to be professional musicians.

“You don’t think you’re going to be in your 30s doing this,” says Hamilton. “With anything you choose to do in life, it’s nice when you stick with something long enough that you get better at it, especially when you’re in a group and you get to share that with friends and see each other grow over that amount of time.”

Since forming seven years ago, Thunder Dreamer has worked hard to pay its dues around Evansville, playing shows all over the city and region in places like the now-closed PG, Lamasco Bar and Grill, Bokeh Lounge, Penny Lane, Deerhead Sidewalk Café, and Mojo’s BoneYard. The dedication of the group also has resulted in two albums (“Capture” 2017 and “Lonesome Morning” 2015), an EP (“Thunder Dreamer” 2015), several tours throughout the country, and an upcoming album set to release next year. While Evansville isn’t an obvious home base for a band, the group’s hometown has been the best place for Thunder Dreamer. Being in the area has allowed the group to play in bigger cities all within a day’s worth of travel.

“I think it’s the perfect place,” says Greenfield. “It’s affordable, there’s lots of good people, and they’re all super hungry for something different.”

Thunder Dreamer’s music stays in the vein of dream pop and shoegaze (a subgenre of indie and alternative rock) but tries not to be confined by genres. Their music has changed over time, because they as a group and individuals have evolved.

“It’s just who we are as people, but we’ve also been growing as people, too,” says Zint.

Not only do they give their music room to develop, but they also allow themselves as a group to do the same. They have learned how to take the highs and lows of band life in stride — from having drinks thrown in their faces during a show to playing in front of a sold-out crowd in Minneapolis, Minnesota, with people whistling between songs.

“It’s a miracle we’ve made it this far, and it’s super cool,” says Wallwork. “We’re just trying to do what we can with our own lives and make sure we’re doing good but also committing to this stuff, because it’s magic.”