One Check At A Time 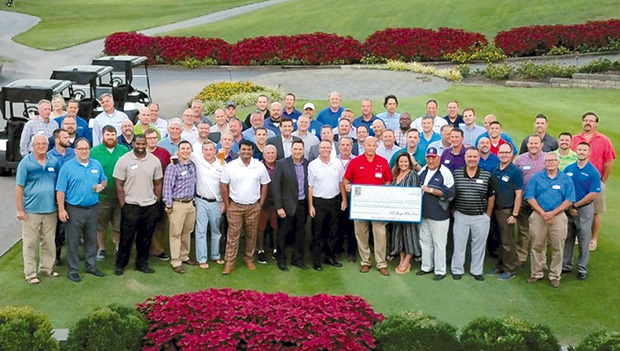 Fundraising is a goal many people strive to meet each year, but may fail to accomplish. But the local organization 100 Guys Who Care looks to give members a unique chance to participate in charitable giving they otherwise miss out on.

Kevin Coon, co-founder of 100 Guys Who Care and Indiana Farm Bureau Insurance Agency manager, came across the concept in November 2017.

“We’re just a bunch of guys who come together to give back to organizations,” says Coon.

Each quarter, members nominate organizations of their choice — all nominations must be local nonprofits.

After nominations are narrowed down to the top three choices and each organization presents themselves, 100 Guys Who Care’s members vote and each write a $100 check directly to the winner. Coon says winners receive about $10,000 to $15,000 and are not eligible for donation for three years.

“The beauty of our group is the power of numbers,” he says. “When more than 100 guys write a $100 check, now you’re talking about thousands of dollars.”

With around 170 current members — including business owners, lawyers, and stay-at-home dads — they continue to increase membership and awareness.

Along with their formal meetings, 100 Guys Who Care have one social meeting to network and recruit. However, Coon says word of mouth is their best form of recruitment.

At their November meeting this year,
100 Guys Who Care officially passed a donation milestone, topping $100,000 given since its inception.

“We don’t know what the future will hold,” says Coon. “The sky’s the limit with us.”