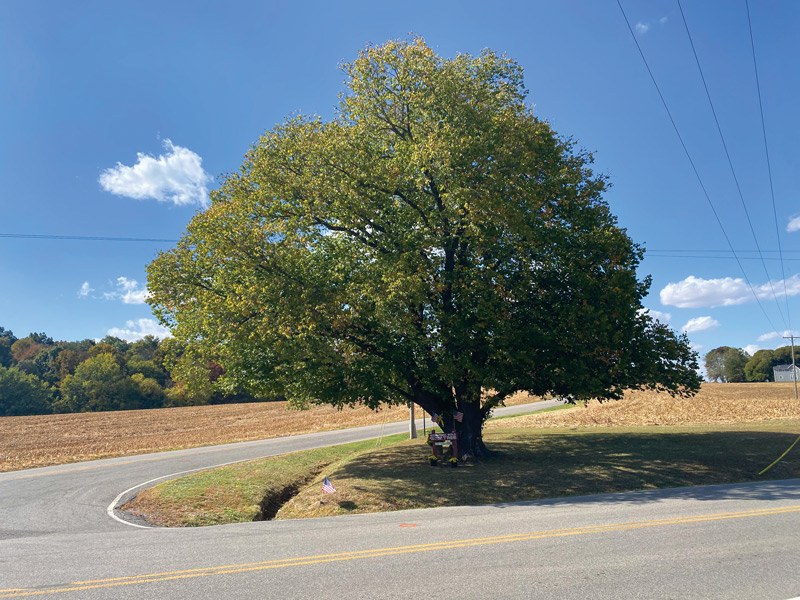 Darmstadt, Indiana, in Vanderburgh County, holds some not-so-secret history if you know where to look. The German town is home to the International World War Peace Tree, a surviving symbol of the 1918 armistice, German Americans’ loyalty to the U.S., and a tribute to World War I veterans.

The tree’s story begins in Germany, when it was in the care of German native Joseph Freudenberg before World War I broke out on July 28, 1914. Once the armistice was signed, ending the war on November 11, 1918, residents celebrated with a picnic on property that belonged to Freudenberg’s relatives, the Wortmans.

Freudenberg planted the young tree on the corner of the Wortman’s property, where Orchard Road and North St. Joseph Avenue meet, and where the tree stands today.

“I don’t think when they planted it, they realized it would still be talked about 100 years later,” says Beth Skeels, a descendant of Freudenberg’s relative, Herman Wortman.

Skeels and her two brothers, Mark and Gary Wortman, own the property. Their great-grandfather, Herman, was the property’s owner when the tree was first planted. Herman’s son, Clarence “Bud” Wortman, inherited the 19 acres of farmland from his father in 1934. Meanwhile, Adelene Lipper (nee Wortman) inherited one acre of the property where the peace tree stands.

Lipper gave the tree to her godson, Mark Wortman, who Skeels says will probably pass the property on to his sons, Jeff and Joe Wortman. Skeels does not see anyone else taking over care of the peace tree. However, if and when it is sold, she hopes the town of Darmstadt will care for the tree because of its historical significance.

“My family has always lived close to the tree. We’ve always taken care of it,” she says. “Hopefully, the tree will remain part of the family for another generation or two.”

One of their duties now includes adorning the tree with flags around important holidays like Memorial Day and Veterans Day. Skeels had a yellow ribbon on the tree when her son did three deployments in Iraq and Afghanistan. Now, Skeels has a yellow and blue ribbon on the tree to honor the soldiers in Ukraine defending their country from the Russian military.

“We still have that hope for peace someday,” Skeels says.