In 1995, several British car enthusiasts gathered at the Evansville Museum of Arts, History & Science to share their cherished motors with one another. Interest developed, friendships were formed, and an idea took root. Thus, the Southern Indiana Regional British Car Club — affectionately and appropriately abbreviated SIR BRIT — was born.

The club has about 80 members, mostly in the Evansville area. Several hail from regional cities such as Owensboro, Kentucky, and Tell City and Washington, Indiana. Membership is open to anyone interested in British autos, but many club members do own at least one vehicle. It’s a far-ranging collection, such as club secretary Al Salhoff’s 1966 Triumph Spitfire, vice president Vince Anderson’s 1965 Jaguar XKE, and president Ken Morgan’s 1974 Morgan 4/4. Club members also own Mini Coopers, Land Rovers, MGBs, and a few Austin Healeys. 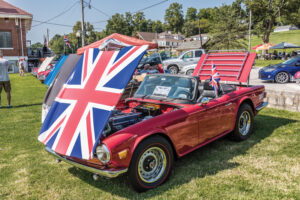 Morgan says club members are drawn to what he calls “unique, quirky little vehicles” for myriad reasons. For him, his desire to own a Morgan 4/4 is because it shares his name. He even toured the Morgan Motor Company factory in Malvern, England, in 2018 while on a trip to the United Kingdom. He says club members find the stories behind the cars and their manufacturers compelling.

“[The Morgan Motor Company has] been on the same site since 1919, and everything is done by hand; there’s not a robot in the place,” he says. “At that time, they were still the oldest family-owned company in the world.” 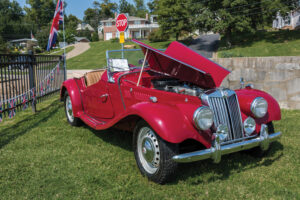 The club promotes an appreciation of British cars and provides technical support to owners. Members congregate at monthly meetings at Red Robin on Evansville’s East Side, occasional lunches at the Wonder Whip in Owensboro, cruise-ins, and casual group driving events throughout the year. Its biggest event is its annual British Car Day, held the third Saturday of every September at the Old Lock & Dam Park in Newburgh, Indiana. This year, the event raised money for SIR BRIT to award two $500 donations to Evansville nonprofit Granted and Owensboro’s Marco Shemwell Foundation.