Gazing at a piece of art by Jeff “Rip” Bender, you’re likely to not catch all the elements at first glance.

“If you look close enough, there’s a lot of abstract, textural stuff, but you also see little animals and characters around it,” he says. “You can find more trappings the more you look at the work.”

Bender, an Evansville native, originally was on track to have a career in medicine, following in the footsteps of his father. But while attending classes at the College of Wooster in Wooster, Ohio, he found himself forging a different, more imaginative path.

“I took a drawing course and just couldn’t get enough of it,” says Bender, who was the University of Evansville artist in residence in February. “I just took off with the projects, jumped right in my junior year, and finished my art major in a year and a half.”

Graduating with a bachelor’s degree in fine arts, he continued honing his styles in graduate school, studied printmaking, and received his MFA at Southern Illinois University of Edwardsville. When he returned to Evansville in 1989, he began teaching art to sixth, seventh, and eighth graders at Plaza Park Middle School and serving as an adjunct professor in printmaking at the University of Evansville. It was during this time he also began to expand his thoughts on what his art could achieve.

“I was attracted to a child-like, whimsical atmosphere with a variety of bits and pieces floating around,” he says. “Some parts almost look like scribbles and some almost have a hint that there’s a story there or a narrative. The works evolved from a strict drawing background to allow for a new way to draw.” 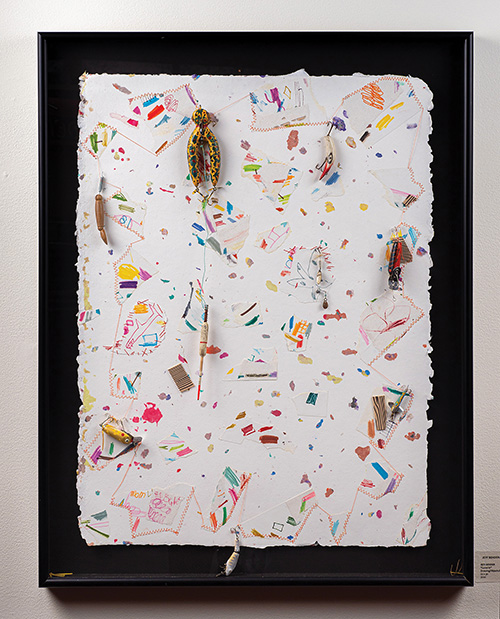 Why art? What drew you to this outlet and style?
I had never had any art classes in high school. In college, I had to have a humanities course, and one of the options was an art class.

Art just seemed like a nice departure from all the academic work, so I took my sketches, ones I had done in my spare time, into the chair of the department at Wooster. He laid all the sketches out and asked me about my background and when I did the drawings. He looked at me and simply told me he thought I was in the wrong major. He said I owed it to myself to take an art course and see where it went.

How did you develop your current art form?
There was a period in grad school where I was drawing a lot of objects you see at home — toilet paper, faucets — and placing them
in the middle of the picture plane. I did all these kinds of textures around them — wallpapers and offhand marks.

But then at a certain point, the objects started getting smaller and I started doing — I wouldn’t say cartoons, but doodling around the drawings.

Right about that time, I moved back home and started doing drawings with my nieces and nephews. And I loved their art. Suddenly the stuff around the object became more interesting to me than the objects themselves.

I watched how kids draw, the spontaneity they had. I noticed they didn’t have any preconceived ideas about how things were going to look, the colors they were going to use, and the freedom with which they used lines. There were just no boundaries, or rules, and that began to intrigue me.

Out of that, I built this body of work I’m still doing — collages, constructions, prints, many of which are on my on handmade paper.

What do you say to those who can’t understand your method?
There’s lots of ways to make music, lots of ways to write, and this is the way I choose to draw. I like drawing this way. I like making these abstract marks and funny characters. It keeps me excited about being in the studio. 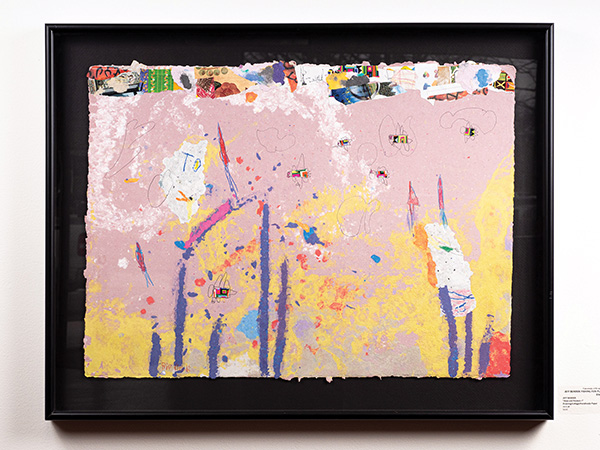 How do you approach a new piece?
There’s a quote — and I really believe this — that basically says you want to be in a constant state of preparing and working in the studio so that, when inspiration strikes, you’ll be ready.

In other words, I don’t rely on inspiration. To me, it’s not about getting great ideas. It’s about getting in there and working with the materials, seeing where things take you, where the color takes you, where that squiggly little character goes.

By doing that enough, you’ll get more ideas. More will come to you. Then, when you get a really great thought, you’re prepared for it because you’ve been working. I really believe that. I’ve always got 20 pieces going at the same time, all in various stages.

How else do you express yourself artistically or find art in the world?
I find stuff all the time on the beach or in the woods and just bring it home. There’s just a ton of little things nature provides for me. Some of it ends up in my art — in a painting, a bench, or a deconstructed toy — and some of it doesn’t. It’s all art, the way you arrange it.

I’ve also written a book, a coming-of-age memoir. I’m hoping in summer I can begin submitting proposals to agents. I’m just always making, creating, or designing something. One project spills over into the whole range of efforts. 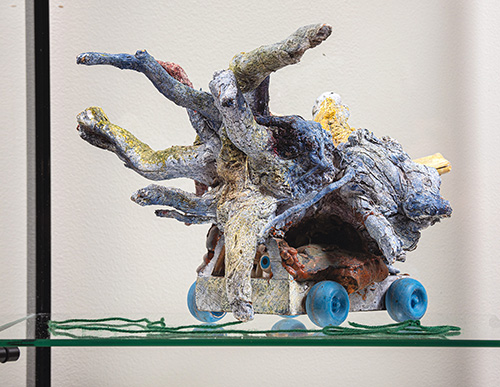 Do you ever get frustrated by a piece?
Oh sure. Anxiety comes natural to me. However, I can’t design a piece without thinking about it conceptually. The idea I’m trying to get across is the design and the design is the concept. They are not inseparable. I don’t just fiddle around and make an arrangement. That would be like arranging your dinner on a plate and expecting it to taste good. I try that occasionally, too, and it doesn’t work out very well!

I can easily get stuck. I have a piece in my studio now I’ve been working on for three years, and I still don’t like it. Sometimes the answers are just incredibly simple, and others take a bit of serendipity to find their place.