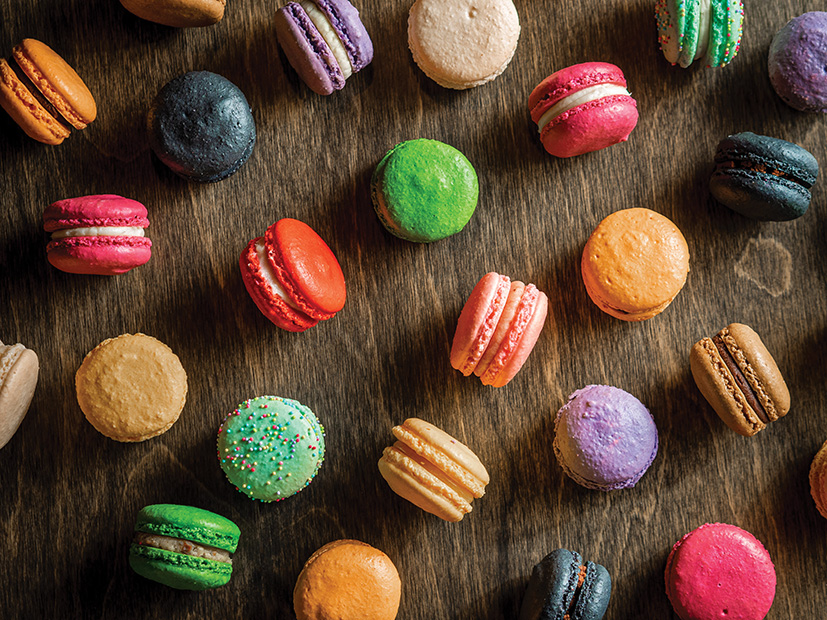 The colors of Evansville are vibrant and make our city a beauty to behold. Explore some of the eye-grabbing shades that make up the fabric of our town. The matcha latte, a pastel green, is perfect for green tea lovers. The dark latte is one of the shop’s secret menu items, using activated charcoal, dark chocolate, espresso, and steamed milk.

One of White Swan’s most unique drinks, however, is the Dwight’s Delight. A vibrant red and named after Dwight Schrute from “The Office,” the latte is a collaboration with Sunshine Juice Co. using fresh cold-pressed beet juice combined with espresso, steamed milk, and raw local honey. Artist Josh McIntosh is painting the town red — and a spectrum of other colors, too. The Evansville native has worked on three different graffiti-style murals throughout the city at Kitty Licks Auto Spa, High Score Saloon, and Damsel Brew Pub.

“It’s really more fun,” he says. “It’s more different. I like to be less traditional in things, even my style. I try to do different things people wouldn’t think of.”

Since 1939, the blue Greyhound station has been an Evansville icon. Indiana Landmarks took possession of the structure in 2013 and Bru Burger Bar made it home in 2016, ensuring the shining neon signs continue to stand str ,ong. It can be hard to choose a favorite color, the same way it can be hard to choose one macaron from Pangea. Known for their authentic Neapolitan and Detroit-style pizzas and Thai-inspired dishes, Pangea offers the carefully homemade dessert in 150 colorful flavors. “I think it offers a bite-size taste of something,” says Sarah Bruggeman, Pangea’s pastry chef. “The fact they look cute, pretty, and colorful is an added bonus.”

May Studio Theatre at UE

Theater means bright lights and big stages, but the May Studio Theatre at the University of Evansville has a different, darker identity. Dedicated in 1994, the May Studio is a black box theater. It is best described as an open, empty black space that allows architectural features to disappear.

“The flexibility of the May Studio Theatre allows students to stretch their imaginations to envision not only the staging, but also the audience-performer relationship,” says Eric Renschler, UE’s Department of Theatre chair. Indiana is synonymous with one thing — rolling fields of crops. Nothing beats those green fields of summer that turn golden as harvest nears. According to the state’s Department of Agriculture, Indiana is the eighth largest agricultural exporter in the country. When the sun rises and sets in Southwestern Indiana, it splashes a multitude of rich colors onto the skies for viewing pleasure. Here in Evansville, you can catch the golds, reds, oranges, purples, and pinks in all their glory anywhere in the city — from Reitz Hill on the West Side and the farmland in the north to the riverfront Downtown.

The eye-grabbing gold and orange of Innovation Pointe not only stands out among the buildings of Downtown, but it also creates a space for entrepreneurs, small business owners, and those looking for coworking options in the heart of the city.

Through the year, hundreds of runners add a dash of color to Evansville’s streets. In March, it’s a sea of green in Downtown Evansville for the Run of Luck (celebrating 20 years), September brings the pops of pink as hundreds gather on the East Side for the More than Pink Walk, and each year closes with red as runners dress as jolly ol’ Saint Nick during the Rotary Santa Run in December. Glance down the bend of the Ohio River at the Evansville riverfront, and it’s hard to miss the large mammoth gray structure of the LST 325. During World War II, production of landing ship tanks was a staple of industry in Evansville. The LST 325 — referred to as the “Grand Old Lady” — spends most of its time as a memorial in Evansville and occasionally voyages to other ports during its off season. In 2020, she will find a new home in Downtown Evansville across the street from Tropicana, accompanied by a new visitors center. LeMond’s love of purple originated with a broach from her grandmother that featured purple irises, but her obsession has only grown over time. In addition to purple clothing and hair, the former Purple Ace changed T.R.U.’s official color to purple, has a purple bicycle, and only uses purple pens/fonts.

Evansville loves fried food. Potatoes, tenderloins, onions, cheese, pickles, even brains — we fry it all. You can’t blame us. There isn’t anything quite as satisfying as heading to your favorite tavern for crunchy, golden goodness. Through the bright green foliage of summer and stark white winters, the warm, fuzzy coats of the red pandas at Mesker Park Zoo and Botanic Garden stand out all year long. Danny Schembre, marketing director for the zoo, says the five adorable creatures — one male and four females — are a huge hit with visitors. "Red pandas are an adorable species and never fail to garner a smile from any patron,” he says.

Bringing a little British flavor across the pond to Evansville, the Pizza Revolution double-decker bus catches the eye with its bright red hue and satisfies pizza lovers with its wood-fired pies, made right on the bus. Last June, Haynie’s Corner Arts District was covered in a rainbow of colors in celebration of the city’s first official Pride Parade and Festival, supporting the LGBTQ+ community. This year on June 6, the celebration returns with drag performances, community outreach booths, food, live music, and a rainbow of colorful fun.

“With the Pride Fest being so successful, it’s really a statement about Evansville,” says Charles Baker, vice president of River City Pride. “We come together to celebrate all of our diversity. It’s a beautiful thing to really share in the human experience.” It’s easy to pass a green ginkgo tree and not blink twice at its appearance. But when fall comes, these popular trees explode in a bright yellow that stands out from many of the other native trees. In the fall, the fan shaped leaves fall into large piles of gold that dot several sidewalks and lawns in Evansville, including Downtown businesses.

At more than 130 years old, the Old Courthouse definitely ranks as top of the most recognizable Evansville landmarks. And in 2015, the historic building brought light back to its iconic tower. Now each night, the tower colors the skyline with different LED lights, depending on the occasion or holiday.

In an industrial city filled with factories, the Evansville Greenway provides a refreshing vivid green space for residents to bike, hike, and walk their way around town. Ski and Grippos. Grippos and Ski. Either way you put it, all of Evansville can agree dusty orange Grippos and electric green ski are simply meant to be.