Out With the Old

Roberts Stadium: The toilets offered no automated flushers. The paper towel dispensers were manual, as well. Unless handicapped-accessible, the stall doors swung inward, leaving less room for adults with children. Ford Center: Automatic flushers! Throughout the entire facility, there are 23 public restrooms; 10 are family restrooms. Women get an extra bathroom on the concourse level. The granite-like composite sinks have a cool curvilinear design.

Roberts Stadium: Six showers, two stalls, two urinals, two sinks — this is the life of the visiting team during a University of Evansville basketball game. The lockers weren’t big enough to hold a hockey player’s equipment. Ford Center: Made with hockey equipment in mind, these locker rooms are large and convenient. It’s the one complaint even proponents have against the arena: Isn’t the visiting team supposed to feel uncomfortable? 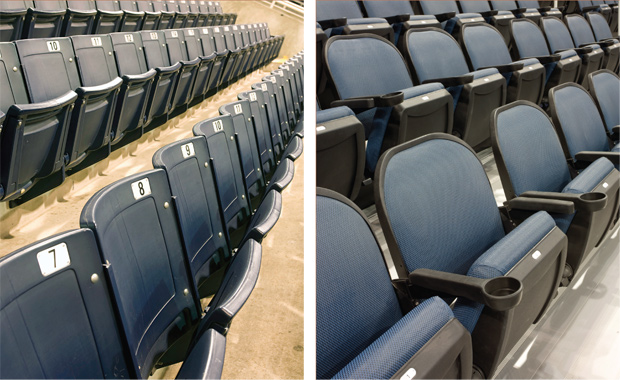 Roberts Stadium: Built decades before anyone ever uttered the phrase “obesity epidemic,” these seats were narrow. The hardback chairs did not spell comfort either. Still, through the decades, we saw such entertainers as Elvis, Cher, Shirley MacLaine and Frank Sinatra, and Garth Brooks perform there, in addition to thousands of basketball games, touring shows, monster truck events, and the occasional rodeo. Ford Center: The 20-22-inch padded seats vary in shades of blue. The result is a river pattern, inspired by our location on the river. Flexible seating allows for 11,000 to be seated at a center stage event, 10,000 for an end stage event and basketball games, and 9,400 for hockey games. Every seat enjoys an unobstructed view.