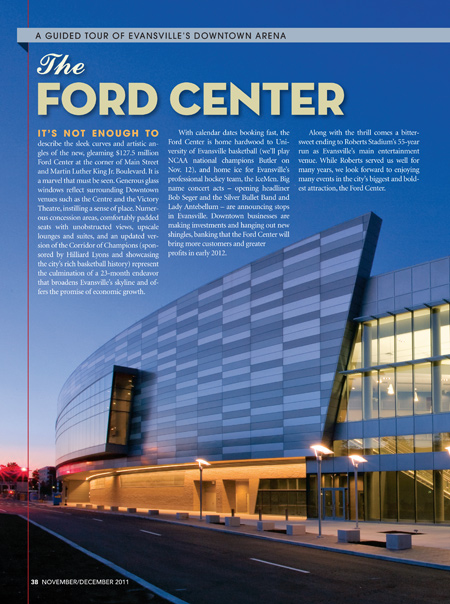 It’s not enough to describe the sleek curves and artistic angles of the new, gleaming $127.5 million Ford Center at the corner of Main Street and Martin Luther King Jr. Boulevard. It is a marvel that must be seen. Generous glass windows reflect surrounding Downtown venues such as the Centre and the Victory Theatre, instilling a sense of place. Numerous concession areas, comfortably padded seats with unobstructed views, upscale lounges and suites, and an updated version of the Corridor of Champions (sponsored by Hilliard Lyons and showcasing the city’s rich basketball history) represent the culmination of a 23-month endeavor that broadens Evansville’s skyline and offers the promise of economic growth.

Along with the thrill comes a bittersweet ending to Roberts Stadium’s 55-year run as Evansville’s main entertainment venue. While Roberts served us well for many years, we look forward to enjoying many events in the city’s biggest and boldest attraction, the Ford Center.