Each time I step outside the door of my home on Evansville’s East Side, it seems I hear an aircraft overhead. An avid user of the nifty smart phone app, FlightRadar 24, I can quickly identify the aircraft, 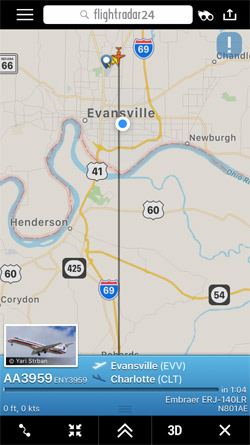 its flight path, and altitude, among other data. Sometimes the plane has taken off from EVV, like this flight (right) awaiting departure to Charlotte.

I recently asked Leslie Fella, director of marketing and air service at Evansville Regional Airport (EVV), about the air traffic over the city.

Q: Has the air traffic over Evansville changed through the years?
A: Traffic levels for overall EVV airspace, roughly 45-mile radius up to 10,000 feet above sea level, over the last five years have been in decline primarily due to drop in General Aviation Activity (cost of operation increased, fewer students learning, and overall economy impact). The year 2013 was the highest; 2015 the lowest. Although increasing, 2018 traffic levels are about 20 percent lower than 2013. Higher altitude (above EVV airspace) corporate, military, and airline operations have been increasing in the last two years.

Q: Why do jets flying cross-country fly right over Evansville? Do they fly over EVV because of our airport or are they following I-64 or the river?
A: Aircraft fly over Evansville because of the city’s close proximity to the Pocket City VOR. VOR is the acronym for Very High Frequency (VHF) Omni-Directional Range (VOR), a type of short-range radio navigation system for aircraft, enabling aircraft with a receiving unit to determine its position and stay on course by receiving radio signals transmitted by a network of fixed ground radio beacons.

Pocket City VOR is located in Posey County near Marrs Elementary School. It is used as a crossover point for many long cross-country flights. Additionally, another VOR in Centralia, Illinois, is used for east/west flights. Aircraft using that VOR would also likely pass overhead near EVV. Visual references to features on the ground (highways and rivers) are not used during cross-country phases of flight.

The next time you look up to the skies you just might be witnessing your Amazon order on its way to Cincinnati before it arrives on your doorstep. 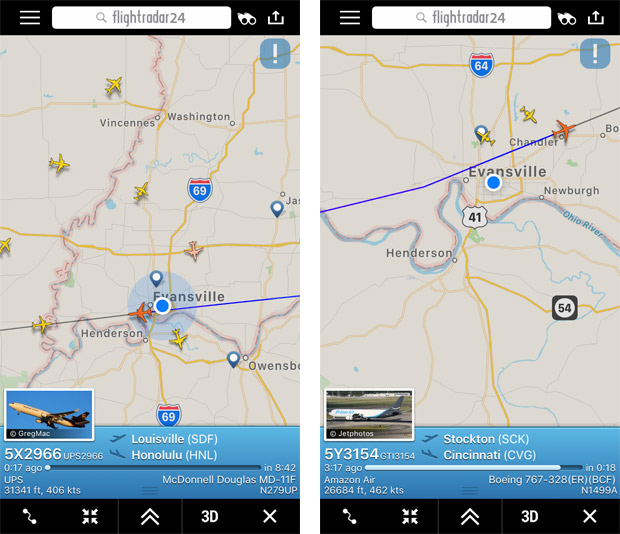