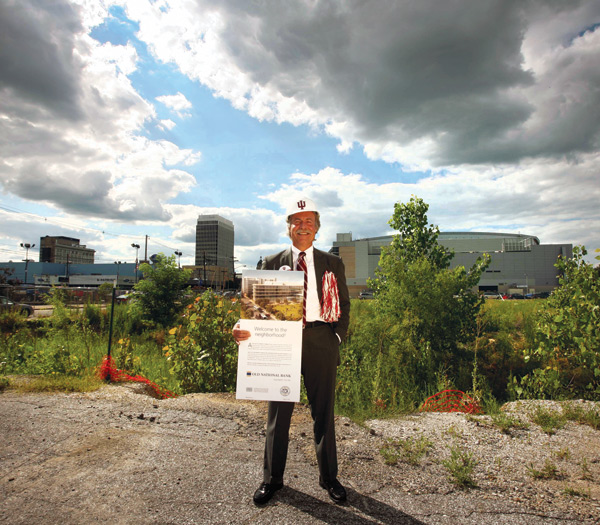 Family: Wife, Lisa; a daughter and son-in-law in Newburgh, Indiana, and a son and his partner in New York City, and three granddaughters.

On what being Indiana University trustee means to him:
The trustee position was kind of a natural evolution from the beginning to reconnect with IU about 35 years ago with a local alumni club. I was involved with the Evansville chapter of the IU Alumni Association. From there I was asked to join the College of Arts and Science Alumni Advisory Board, I became the national chair of the whole Alumni Association in 2000. A spot opened on the board of trustees — it was a governor appointee position that opened up — so I thought that it seems to be the next natural step. When I went on the board in 2002, Myles Brand was president of IU, that’s how far back I go. I’m now the senior member of the board in terms of longevity. So I guess I would tell you if you love your university, it’s a wonderful view from there. Indiana University was so important in my life. It’s been an opportunity to give something back to my alma mater that I love. I’ve been able to use it I think to benefit Evansville.

On seeing the evolution, expansion, and growth of Indiana University School of Medicine – Evansville:
It was a wonderful coincidence that at a time when Indiana University, which is the state’s only public medical school and the second largest medical school in the U.S. with eight regional medical centers, decided to expand medical education. We had a new dean who came in very motivated. And working together with him, being part of the ground floor, and there have been a lot of people in this town who helped make that vision reality, but I was able to steer it through the inside channels at IU. With new leadership, ambition, vision, it was just wonderful seeing all that develop and doing my part to make sure that it happened

On his parents’ influence on his education:
My dad went to Central High School; my mother went to F.J. Reitz. My mother graduated in June, they got married right out of high school in July, so we’re first generation college kids, my brothers and I. My parents are firm believers of the American dream and that is, every generation will have it better than we did and that education is key. Here are two high school graduates (Shoulders’ parents) who absolutely pounded into their boys that hard work and higher education is the ticket. So they have three sons, two lawyers and an architect. That was just really an ethic in our house. They (Shoulders’ parents) didn’t have it (a higher education), but by God their boys were going to.

On vision for Evansville:
I always believed Evansville could be the best at what it put its mind to. I want it to be a vibrant, viable, great city that gave me all the opportunities and joy I have had out of life. Now it is available for my daughter and her family. Potentially it will be there for my granddaughters if they choose.

Final thoughts:
I think that politics on a national level has become broken. It seems to be all about reelection and not much else. I am proud that we’re still able to get things done at a local level. I think the ideological divide of national politics is not the focal point of local government. I hope that continues. Locally it ought to be about retail, service, excellent fire and police, and economic development. I think we understand that locally. When this Indiana University School of Medicine – Evansville idea began to get legs, I had a very small group in this town. They worked hard. It was about Evansville. It wasn’t about who’s going to get credit, who’s going to get reelected, and who’s going to get rich. It was about Evansville and Downtown. That is the way progress is made. I think that is the spirit I am seeing now over these last 10 years in this town.