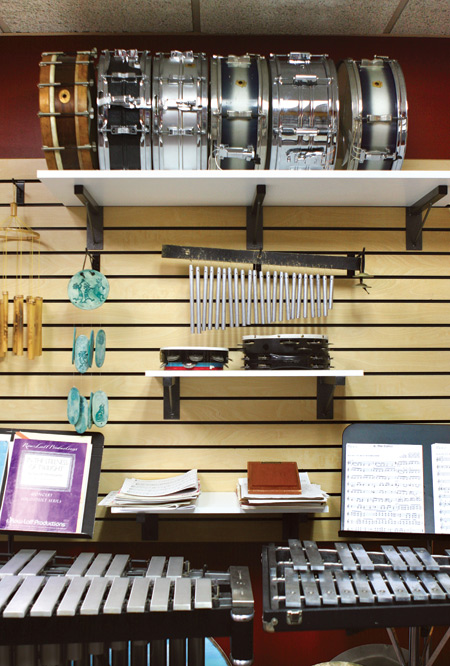 As a child, Gregg Martin was drawn to the drums when he saw the Beatles perform on the Ed Sullivan Show. Equipped with a single snare drum, he began to play, and as he got older his collection grew. In high school, he purchased a vibraphone and played in the school band, completely hooked on percussion. Now, his office/studio at The Guitar Lab (1010 S. Weinbach Ave.), a comfortable building with two stories of teaching rooms and an ambient recording studio, reflects almost 40 years of professional drumming and world travel.

He has toured with an impressive list of stars including saxophonist Ernie Watts and singer/actress Liza Minnelli, and also played with the traveling Tales & Scales group. As a teacher, he spends his days immersed in percussion instruments.

Though he started out on a basic drum set, Martin prefers percussion. “You get to put spices in the music,” he says, and “you can make anything a percussion instrument.” This is true: he has one set of chimes made from bamboo and another made from dismantled orchestral bells, hailing from his time with Tales & Scales.

Martin’s collection demonstrates a broad range of cultures and times. The yellow-orange maracas (top right) are intricately fire-painted gourds from Peru. He has Indonesian maracas made from the shells of nuts, and an authentic Native American drum hanging on the wall.

Percussion Everywhere
Martin stands among his percussion instruments, including the red ashiko drum he made himself in college with 4×30-inch wood strips and a calfskin cover. At the top of the wall behind him, he has two sets of tribal masks in frames. He thought they’d go well with his studio’s theme. (Even more treasured is a paper palm tree he made himself for his Hawaiian-themed wedding.)

Drum History
On a shelf above his vibraphone sit several snare drums, including the approximately 100-year-old Ludwig snare on the far left. It’s a collector’s item; he never plays it.

Signature Relics
Two of Martin’s most prized possessions are a pair of signed posters: one of Pete Best and one of the post-Best Beatles. He saw the Pete Best autograph in an entertainment specialty shop and said, “That’d be cool to have.” While his back was turned, his wife bought it, and later gave it to him as a Christmas present.