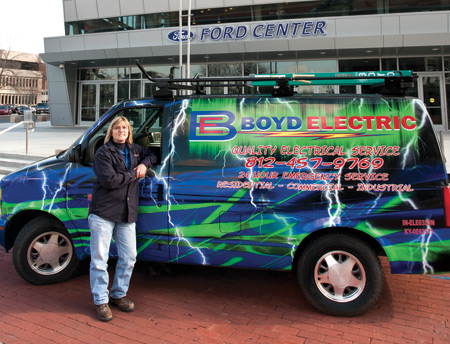 Kathy Boyd loves the smell of ink. That’s what kept her down in the print shop instead of cooped up in an office behind a computer. Her graphic design degree seemed like a good idea when she was in school, but not long into her first (and only) job as a designer, Boyd got antsy. “It was really boring to sit in an office all day,” she says, “so I ended up going out to the print shop and teaching myself how to run a printing press.” A few years later, in 1996, the restless woman made another career change — this time, as an electrician.

Fulfilling her need for a physical job, Boyd, who now owns Boyd Electric, was accepted into a five-year apprenticeship that provided her valuable experience with numerous area contracting companies including Deig Bros. Lumber and Construction, Industrial Contractors, and JE Shekell. Upon completion in 2001, Boyd worked for many more companies until 2008, the year Holly’s House, a child and adult advocacy center for victims of intimate crimes, came to town. When the International Brotherhood of Electrical Workers, the union where Boyd is a member, decided to donate labor to help build the organization’s facility, she was on board. With a keen interest in the not-for-profit’s mission, Boyd landed the job as construction manager, overseeing every detail of the project from start to finish. Nearly nine months later, the finish line came, and the experience proved a much greater reward than she anticipated. “I really believe I became an electrician to build Holly’s House,” Boyd says. That notion was proved even further when she went back to working for companies. Although great ones, Boyd says, it was still just building a warehouse or a store — nothing to the measure of a home that helps victims of abuse.

Finally, a friend stepped in. “The reason this isn’t working for you is because this isn’t what you’re supposed to be doing,” her friend told her. “I don’t know if you’re not supposed to be an electrician, but you’re not supposed to be working for somebody else.” So, in 2009, Boyd opened Boyd Electric, a five-person business she refers to as a service company. “What I love to do is service work,” she says. “I love to go out into people’s homes and find ways that are practical and affordable for them to fix the problems in their house.” Whether it’s volunteering her labor, calling her suppliers for donations, or setting up a payment plan, Boyd is willing to go the distance for her customers.