Phenom of the Opera

Luther Lewis is making his mark on the arts through performing, directing, and painting

Luther Lewis III was just 17 years old when he stepped onto the Victory Theatre stage for the first time. The Signature School graduate’s choral performance in the Evansville Philharmonic Orchestra’s rendition of the French opera “Carmen” would be the first of many appearances onstage for the multidisciplinary artist. Since that time, he has performed across the country and the globe.

In his first year as the inaugural stage director at the Ryan Opera Center at the Lyric Opera of Chicago, Lewis’ musical journey began when he sang as a child in the Trinity United Methodist Church choir in Downtown Evansville.

“I was raised in church, so that was probably my first exposure to music — sing- ing in the church choir in middle school,” he says. “I never thought I would’ve been a singer when I was a child because I was kind of shy. I joined the middle school choir, which helped my confidence, and I started to sing more.”

Lewis studied under the late Trinity UMC music director Jerry Hoover during his first two years at North High School before transferring to Signature School, where he performed in choir and student musicals.

“I was debating between going into musical theater or opera, and studying voice seemed to have more opportunities as far as scholarships,” he says.

Lewis went on to study at the Oberlin Conservatory of Music, Oberlin, Ohio; the University of Kentucky, Lexington, Kentucky; and the School of the Art Institute of Chicago, Illinois, before landing his first job at the Lyric Opera of Chicago as a chorus member. There, he has been involved in eight different productions, along with performing with opera houses throughout the U.S. and Canada, including Opera Columbus in Ohio; Opera Saratoga in Florida; Cincinnati Opera in Ohio; San Francisco Opera in California; and Opera de Montreal in Canada.

He returns to Evansville in December as a featured vocalist for the EPO’s Peppermint Pops concerts Dec. 3-4, singing holiday favorites such as “Silent Night,” “Here Comes Santa Claus,” and “O Holy Night.”

You’ve performed with the Evansville Philharmonic Orchestra before. What does it mean for you to return to sing in your hometown?

It’s poetic, in a way. It’s the full circle moment of coming back to where I got the bulk of my training. I still credit Evansville for being where I really started to find my first love of live theater and performing, so it’s always great to be back. It’s great seeing some of my instructors. Mrs. Hoover (Jerry Hoover’s wife) still comes and she’s an avid supporter, and it’s great to be able to honor his legacy. I think Evansville itself is a great arts hub, too. It’s not really close to any major city, so it’s sort of the perfect place to incubate if you’re a performer. There are not too many distractions. It’s awesome to come back to a community that is so appreciative, and I’m excited about what the future of the EPO will be as well.

Aside from opera and musical theater, you also direct and create visual art. What led you to explore other art forms?

For the last few years, I’ve segued into more of the directing path, directing opera and
musical theater in particular. What led into that was I wanted to use more of my skill. Even 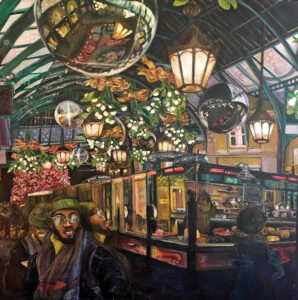 when I was in Evansville, I was doing visual art on the side, so I had that discipline in the background while I was growing up, though I’ve been wanting to focus on that for years.
In 2015, the Arts Council of Southwestern Indiana had an art show concert. It was of iconic opera singers of the 20th century, so it included Luciano Pavarotti and Leontyne Price and Placido Domingo. I got to exhibit some portraits at the Arts Council, but I also sang a live concert performance the last few days. That started my curiosity of, ‘Well, maybe I can sort of try to combine these two things.’ I hope to bring some work in December to the concert. I’m mainly painting and drawing. Specifically, I’ve sort of cut my teeth on portraiture. I like pastel in particular. It’s kind of a unique medium.

Do you perform other genres outside of classical and opera?

My bread and butter is classical music and opera, but I’m shifting. I’ve always done gospel on the side, but I’m shifting into more of a crossover genre along the lines of a Josh Groban or Leslie Odom Jr. — more of a Great American Songbook mixed with some more contemporary music. I’ve always been in between opera and music theater, but I’m definitely going more into pops as far as classical music is concerned.

It’s been an amazing time. It’s something I really missed, especially during the pandemic when travel was limited. I’ve toured in Paris, gone to Amsterdam, and Geneva, Switzerland, of all places. Europe is phenomenal. It was a culture shift, but it was also kind of eye-opening. I appreciated being able to see the history and go to some amazing museums and be in these iconic theaters, where they’re producing these wonderful works and they produce so much more opera in comparison to the United States. But of course, a lot of them are state-sponsored. It’s impressive to go into a house where they’re producing 20 different productions a season. The audiences seem to really appreciate and be receptive to opera as well.