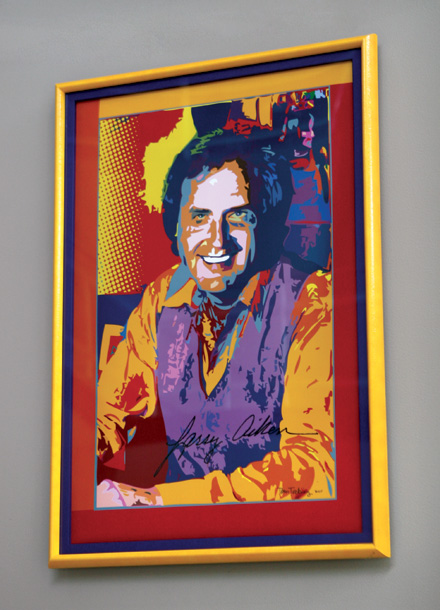 Below the “Aiken Theatre” sign in the lobby of The Centre’s auditorium now resides an energetic portrait of a smiling Larry Aiken, the colorful entertainment promoter, civic and political leader, and the late namesake of the auditorium. Created by graphic designer and Larry’s old friend Tom Trebing, the vibrant portrait captures the “pop-art” feel that Trebing and Larry’s wife Suzanne wanted, with stylized purples, yellows, and oranges.

Suzanne Aiken recalls she knew exactly what she wanted in the portrait. “It needed to be colorful,” she says. “Dull and bland wasn’t going to say ‘Larry.’ That wasn’t his personality.”

Trebing agrees. “(Larry) was not a formal man,” he says. “He was a hard-driving, highly creative, in-your-face kind of guy.” Trebing suggested pop art, and it was settled. No other medium would better represent the man they knew. “Put bell-bottom pants on him, his feet up on the desk, that’s Larry,” Trebing says. It was also important to both Suzanne and Trebing that Larry was portrayed before his heart attack in 2001. Suzanne provided Trebing with different photographs before they chose a grainy newspaper picture from the mid-’80s, which Trebing recreated and colored using Adobe Illustrator.

In February 2009, Larry’s friends organized a roast in his honor: “An Evening with Lonesome Larry” (referencing a nickname that dated back to Larry’s high school job as a DJ for WEOA). The roast concluded with the announcement that the Centre’s auditorium would be named after Larry. Surprised by the honor, Larry chose the name “Aiken Theatre” and helped create the sign’s format.

Almost a year later, in February 2010, Larry died from health problems related to his longtime smoking habit, which he abandoned after his heart attack. In April that same year, Aiken Theatre was dedicated. At that time, Suzanne realized a portrait was needed. While in touch with Trebing to finalize the portrait, Suzanne worked with The Centre for permission to hang the picture in the lobby. It was finally displayed toward the end of summer in 2011.

Suzanne says the portrait is a great way to embody Larry’s work in Evansville, which began when he was just 14 years old. The couple dated in high school and married in 1963 when they were both 22 years old. Suzanne was with Larry throughout his entire career, during which he managed nearly 1,500 shows. He retired in 1999.

Read our conversation with Larry Aiken in the February/March 2009 issue of Evansville Business.