It’s all about the popcorn when it comes to Indiana. From Orville Redenbacher to Pop Weaver, the state is home to popcorn pioneers and continues to be a giant in the industry.

In fact, Indiana is the nation’s second-largest producer of popcorn, behind only Nebraska. According to the U.S. Department of Agriculture, the Hoosier State produces nearly 25 percent of all popcorn in the country.

This year, one Indiana brewery is celebrating the time-honored Hoosier snack with a new specialty ale. Indianapolis-based Sun King Brewery has partnered with the Indiana State Fair for the event’s official 2022 beer, a one-of-a-kind caramel corn ale. 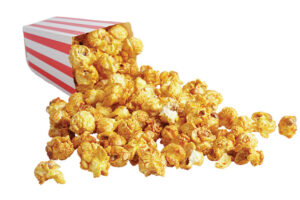 Infused in each batch are 100 pounds of caramel popcorn from Just Pop In, an Indianapolis gourmet popcorn shop.

Those craving a sip of Sun King’s buttery caramel corn beer can find it at this year’s state fair July 29-Aug. 21 at the Indiana State Fairgrounds and Event Center. A limited amount also will be available on draft at the brewery’s tap room locations and at Just Pop In.